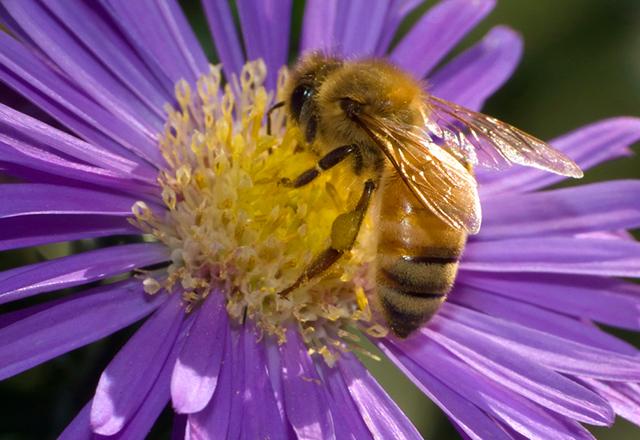 Honeybees could be on their way back, according to a new federal report.

If your spirits rose, as mine did, on reading that opening line for an article on the annual U.S. Department of Agriculture survey of honeybee losses, I’m sorry to break it to you:

Nobody actually seems to think anything much has changed in the honeybees’ long-term outlook, not even the report’s authors and other experts quoted in paragraphs that followed.

First of all, as the USDA’s point person on the project, Jeff Pettis, told the Times, “One year does not make a trend.”

And Dennis vanEngelsdorp, another co-author speaking for the Bee Informed Partnership, a trade association that partners with USDA on the survey, said that last year’s rate of colony loss was “not a good number” and signifies only that “we’ve gone from horrible to bad.”

That not-good number — 23.2 percent of colonies lost over the winter of 2013-2014 — is the survey’s marquee statistic in the Times story and most other coverage, but it comes with a lot of context and footnotes.

Yes, it’s well below the overall average of 29.6 percent for the survey’s eight years (including this one), but it’s not the low point for the period. That came in the winter of 2011-2012, for which beekeeper losses were calculated at 21.9 percent.

The high point —36.0 percent —was in the winter of 2007-2008, the second for which the survey was taken, and the third winter since the emergence of the mysterious syndrome called colony collapse disorder, or CCD.

The numbers have bounced up and down since then, and it is difficult to know how much of that volatility may have to do with changes in survey participation, which this year consisted of 7,200 beekeepers managing 564,000 colonies, for a little over one-fifth of the U.S. managed-honeybee business. 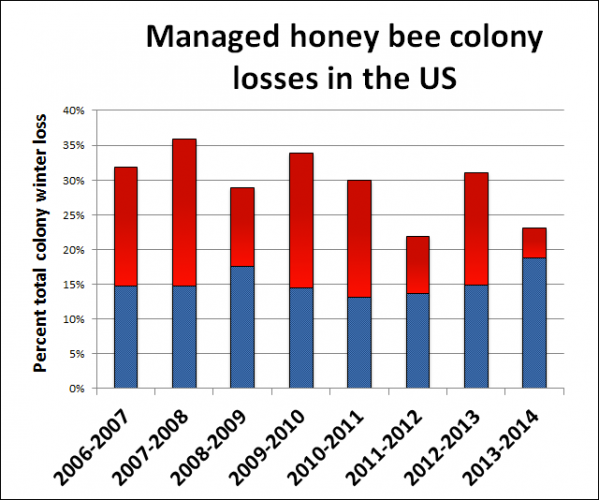 beeinformed.org
Summary of the total overwinter colony loss (October 1 – April 1) of managed honey bee colonies in the US across the 8 annual national surveys (red bars). The acceptable range (blue bars) is the average percentage of acceptable loss declared by the survey participants in each of the 8 years of the survey.

The volatility in bee die-offs could also have something to do with volatility in the sector itself, with many beekeepers packing up shop because of CCD and others taking their places.

One new statistic in this year’s report concerns spring and summer losses of bee colonies, which beekeepers weren’t even asked about in the preceding seven surveys, but this year reported is as 20 percent. Add the full-year losses from last May through this April together and you get 34 percent (not all beekeepers participated in all parts of the survey).

I’ve been reading both critically and widely on this report because the plight of the honeybees, and the risk it poses to food security, is a big interest of Earth Journal readers and of mine as well. Here are excerpts from some of the best of what I found:

Over at The Guardian, Suzanne Goldenberg focused on the report’s finding that “the death rate among honeybees over the last eight years was still too high for the bees’ long-term survival.”

“While we are glad to see improvement this year, losses are still too high, and there is still much more work to be done to stabilise bee populations,” the agriculture secretary, Tom Vilsack, said in a statement.

Noting the growing body of research that links bee deaths to nicotinoid insecticides, she observed:

Agrichemical companies such as Monsanto, Dupont, Syngenta and Bayer – which either make the pesticides or use them for their seed products – say the collapse of the honeybees is due to other factors, including mites.

The report – which was produced in partnership with a Monsanto-owned firm, BeeLogis, offered no explanation for the improvement in the bees’ survival rate.

“Yearly fluctuations in the rate of losses like these only demonstrate how complicated the whole issue of honey bee heath has become, with factors such as viruses and other pathogens, parasites like Varroa mites, problems of nutrition from lack of diversity in pollen sources, and even sublethal effects of pesticides combining to weaken and kill bee colonies,” said Jeff Pettis, co-author of the survey and the USDA’s chief bee researcher.

Mark J. Miller, writing in National Geographic, also pointed to USDA’s calculation of 18.9 percent as an average of the die-off rates that surveyed beekeepers considered the maximums they could sustain and summarized, as did most writers, the prevailing thought that the die-offs result from a complex of factors including the “neonics,” parasitic Varroa mites and other disease, and loss of wild foraging grounds to development.

“This year’s survey results, while encouraging, do not provide much comfort because it is not known why the bees seemed to do better this past winter than previous winters,” said Gene Robinson, director of the Institute for Genomic Biology and an entomology expert at the University of Illinois at Urbana-Champaign. “We can’t rest until we really understand the factors that drive differences in losses.”

Robinson told National Geographic that the colony numbers need to be stabilized in order to “safeguard our food supply.” Honeybees pollinate plants that produce about a third of the food Americans eat, including apples, almonds, watermelons, and beans.

VanEngelsdorp said measures that might help stem bee losses would include a reevaluation of pesticide use, the maintenance of clean forage for sire bees, and better control of Varroa mites, the most damaging pest to honeybees.

As you might expect, Entomology Today dug a little deeper still, with an unsigned piece that looked at the seasonal patterns, particularly the new finding that “summer death rates were nearly as high as the winter ones.”

The generation of bees that lives through the winter must survive months longer than summer bees’ 30-day lifespan. In winter, honey bees don’t produce offspring and are confined in a hive where diseases can spread.

“We used to think winter was the critical period,” vanEngelsdorp said. “But during our field studies, beekeepers told us they were also losing colonies in the summer months. So we expanded the survey and found that in fact, colonies are dying all year round.”

About two-thirds of beekeepers surveyed, who ranged from hobbyists to large businesses, said their colonies suffered unacceptable losses — greater than the 19 percent mortality rate that, on average, they were willing to absorb. It was the second year in a row that most beekeepers reported unacceptably high mortality.

And for an actual beekeeper’s view, I admired Dan Heath’s report for the Press-Republican of Plattsburgh, N.Y., where his duties last Sunday included covering a meeting of the Champlain Valley Beekeepers Association and interviewing its president, Dick Crawford:

The stress of multiple transitions to various parts of the country to aid in crop pollination is another possible factor, Crawford said. Locally, most apple orchard owners bring in bees from the south, he said. Those same bees are then often brought up to Maine to help with the blueberry crop.

He said die-off has caused some beekeepers to cut back on travel. “It’s not worth the loss,” Crawford said.

[In addition to affliction with mites,] Crawford said the weather could also be a factor. This long, cold winter was not ideal, as there were many more days with below zero temperatures in the region this year, especially early in the season in December. Losses occurred even though he treated the hives and gave the bees plenty of pollen and sugar water prior to sealing them in for winter.

He said the bees that died had plenty of pollen and honey left in their hive boxes when he inspected them this spring. They just couldn’t get to the food because the cold paralyzed them.

Although the final version of the USDA report is still in preparation, the department’s news release and links to the data sets can be found here.