It’s a strange eddy in the currents of climate-change news when Al Gore proclaims, in optimistic prose, a tidal shift in global efforts to rein in carbon emissions, while a group of commerce-minded gentlemen – a fair share of them Republican – issues a dire warning about global warming’s threat to American business and investment.

But both have happened in the past week or so, and each is worth a close look on its own merits.

Taking the freshest first, let’s consider “Risky Business: The Economic Risks of Climate Change in the United States,” whose grim conclusions include a projection that, absent dramatic new reductions in greenhouse-gas emissions, Americans will experience multiple days each year in which heat and humidity make simply being outdoors a life-threatening activity.

Claiming to be the first “comprehensive assessment of the economic risks our nation faces from the changing climate,” the report uses risk-assessment measures that are standard in the business world and applies them, on a region-by-region basis, to widely accepted, peer-reviewed, science-based predictions of impacts traceable to the Earth’s continued warming. (Among the sources are the National Climate Assessment discussed in this space last month.)

Its principal focus is on “damage to coastal property and infrastructure from rising sea levels and increased storm surge, climate-driven changes in agricultural production and energy demand, and the impact of higher temperatures on labor productivity and public health.” 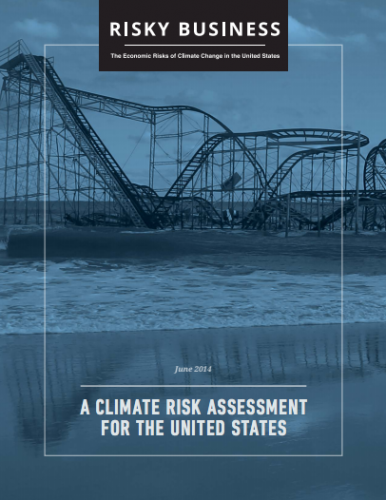 And its risk calculations factor in both the likelihood of a particular impact (the odds of a certain degree of sea-level rise, for example) and the probable damage that can be associated with it.

Thus, a highly likely impact with a relatively small potential for harm could rank below a less probable but more destructive scenario. It’s the kind of calculation we all do when we decide where to set the deductibles on our auto insurance, or whether to buy extended warranties on a $15 jump drive (nah) or $750 laptop (maybe a good idea).

By the same measure of probability, average annual losses from hurricanes and other coastal storms along the eastern Seaboard and Gulf of Mexico will grow by more than $42 billion due to sea level rise alone. Potential changes in hurricane activity could raise this figure to $108 billion.

The report devotes considerable attention to predictions of the frequency and distribution of days with high temperatures above 95 degrees Fahrenheit, which is not a marker chosen at random. Without significant new reductions in greenhouse gas emissions,

One of the most striking findings in our analysis is that increasing heat and humidity in some parts of the country could lead to outside conditions that are literally unbearable to humans, who must maintain a skin temperature below 95º F in order to effectively cool down and avoid fatal heat stroke.

The U.S. has never yet seen a day exceeding this threshold on what we call the “Humid Heat Stroke Index,” or HHSI, but if we continue on our current climate path, this will change, with residents in the eastern half of the U.S. experiencing 1 such day a year on average by century’s end and nearly 13 such days per year into the next century.

In its section on economic risks in the Midwest region, the report focuses first on agriculture, and the outlook is worse in its southern portions. Farmers in Missouri and Illinois are likely to experience 15 percent average losses in yield in the next five to 25 years, it finds, with that figure rising as high as 73 percent by the end of the century. Across the region, and assuming no effective adaptation strategies are implemented, the yield declines are pegged at 19 percent by mid-century and 63 percent by 2100.

On the other hand, it finds that the agricultural sector is “probably the best equipped to manage these risks” because farmers “have always adapted to changing weather and climate conditions, with adaptation and flexibility built into their business models.”

However, there are limits to how much adaptation is possible, and “in many cases, crop production will likely shift from the Midwest to the Upper Great Plains, Northwest and Canada.”

But the real story in this region is the combined impact of heat and humidity … . Even at an HHSI of 92º F, core body temperatures can get close to 104o, which is the body’s absolute limit.

To date, the U.S. has never experienced heat-plus-humidity at this scale. The closest this country has come was in 1995 in Appleton, Wisconsin, when the HHSI hit 92° F. (At the time, the outside temperature was 101° F and the dew point was 90° F.)

… Our research shows that if we continue on our current path, the average Midwesterner could see an HHSI at the dangerous level of 95° F two days every year by late century, and that by the middle of the next century, she or he can expect to experience 20 full days in a typical year of HHSI over 95° F, during which it will be functionally impossible to be outdoors.

As for Al Gore’s somewhat untypical take, published last week in Rolling Stone, it must be said, first, that the former vice president delivers some genuinely good news in support of his key thesis that “a powerful, largely unnoticed shift is taking place” in the struggle to rein in global warming:

The forward journey for human civilization will be difficult and dangerous, but it is now clear that we will ultimately prevail. The only question is how quickly we can accelerate and complete the transition to a low-carbon civilization. There will be many times in the decades ahead when we will have to take care to guard against despair, lest it become another form of denial, paralyzing action.

It is true that we have waited too long to avoid some serious damage to the planetary ecosystem – some of it, unfortunately, irreversible. Yet the truly catastrophic damages that have the potential for ending civilization as we know it can still – almost certainly – be avoided. Moreover, the pace of the changes already set in motion can still be moderated significantly.

Elements of Gore’s big shift include accelerating deployment of solar-generated electricity, a shrinking of the price gap between electricity derived from coal or natural gas and electricity generated from the sun and wind, growing investment in “distributed generation” as a more efficient and resilient alternative to utility-dominated systems.

It’s especially encouraging to read his observations about India and China embracing renewables in a big way; to review case after case in which businesses, governments and citizens have disproved discouraging industry forecasts of slow expansion in the renewables sector; to see some persuasive evidence of the Koch brothers’ declining influence.

But I looked in vain for any material that refutes any of the fundamental points in the Bloomberg group’s report.

They’re just writing about different time scales, and when Gore speaks of “unavoidably serious damage to the planetary ecosystem,” he’s talking about, you know, decades of catastrophic sea-level rise, massive shifts in agricultural zones, a lengthening tally of days it’s fatally hot and humid to be outside.

I’ll grant that all of this misery combined doesn’t add up to the end of all civilization as we know it. But for the many who will be afflicted, it will be plenty close enough.