This week a research team led by Mark Brigham, a hydrologist with the U.S. Geological Survey’s office in Mound, published a groundbreaking piece of research on mercury contamination of northern Minnesota lakes.

For the first time, Brigham explained to me on Wednesday, scientists were able to clearly correlate measured declines in “wet deposition” of atmospheric mercury, carried to earth by rain, with declining levels of methylmercury in lake water and in fish.

As we’ve all come to understand through a few decades of public-health warnings about eating too many tainted game fish, methylmercury is the form  that accumulates and — my favorite new word of the week — “biomagnifies” in fish.

But we’ve also come to understand that almost everything about the science of what happens to mercury once it drops to earth is highly convoluted. By contrast, the design of Brigham’s study, published in the journal Environmental Science and Technology, was straightforward:

Water at the surface of four remote lakes on the Kabetogama Peninsula of Voyageurs National Park was tested from 2001 to 2012 for levels of methylmercury and two acid-rain components — sulfates and hydrogen ions — that promote methylation of mercury.

In addition, the year-to-year change in concentrations of methylmercury in fish was measured with the elegantly simple technique of analyzing tissues of year-old yellow perch —fish too young to be carrying mercury from previous years.

These data were compared with measures of atmospheric mercury deposition recorded at two federal monitoring sites in northern Minnesota for a slightly longer period, 1998-2012.

At two of the four lakes, Peary and Ryan, methylmercury levels fell in almost perfect sync with the deposition declines recorded at the monitoring sites — 46.5 percent in the water, 34.5 percent in the perch.

At a third lake, Brown, the trend line went in the opposite direction because of a peculiarity of terrain and precipitation trends; methylmercury went up by 85 percent in the water sampling and 80 percent in the fish.

At the fourth lake, Shoepack, the trend measurements were confounded by two unanticipated natural disturbances: a forest fire and destruction of a critical beaver dam. 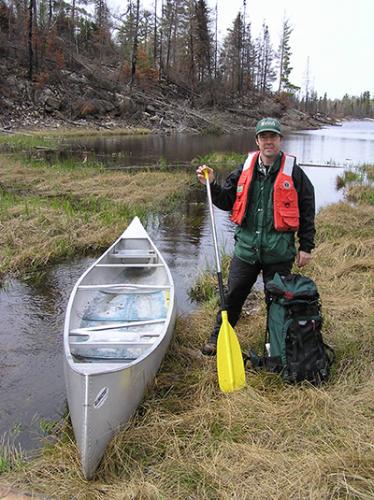 On what matters most in the findings:

Mark Brigham: It’s a success story, I guess. We’ve gotten mercury out products, first, and then out of emissions from waste incinerators. Now we’re starting to tackle emissions from coal-fired power plants, and the results are showing up.

For the lakes we studied, there are no natural sources of mercury, nor any point sources in their watersheds. There aren’t even houseboats, as there are on the big lakes in Voyageurs. These are pristine lakes, wilderness lakes; the only way you get back to these lakes is by hiking in.

On how the study differs from past work:

MB: Certainly there are other studies that have looked at depositional trends, primarily in the northeastern United States, and they show a number of sites with decreasing deposition rates.

But it hasn’t really been observed so much in Minnesota before. Now we’ve got a long enough record, and the trends are significant enough, to show the declines in Minnesota.

Also, there are many papers based on monitoring of game fish, related to fish-consumption advisories because of mercury.

But no one to date has reported long-term trends for mercury concentration in the water column itself. That was one unique angle to this study, and the other was to show what was happening in the year-old yellow perch.

My collaborators at the University of Wisconsin-Lacrosse have been big proponents of using these perch because they’re at a key point in the food chain. They eat of lot zooplankton and aquatic insects and other stuff that a small fish can fit into its mouth.

So they’re an important sentinel organism, indicating not just how much methylmercury is in the food web at their level but how much is likely to move to higher levels.

On why mercury measurements can vary widely among similar lakes in the same region:

MB: We think that’s largely a function of wetland area within the watershed of a lake. Certainly there’s a number of studies out there to support that, including our prior study of lakes in Voyageurs, published in 2006.

Wetlands are sensitive to inputs of mercury — if you put more mercury in, it’s the right kind of geochemical environment and therefore a lot more methylmercury gets produced. As the microbes consume all of the oxygen in the sediments or in the water column of a wetland, the next thing they turn to is sulfate, and one of the side effects of sulfate reduction is that mercury gets methylated. 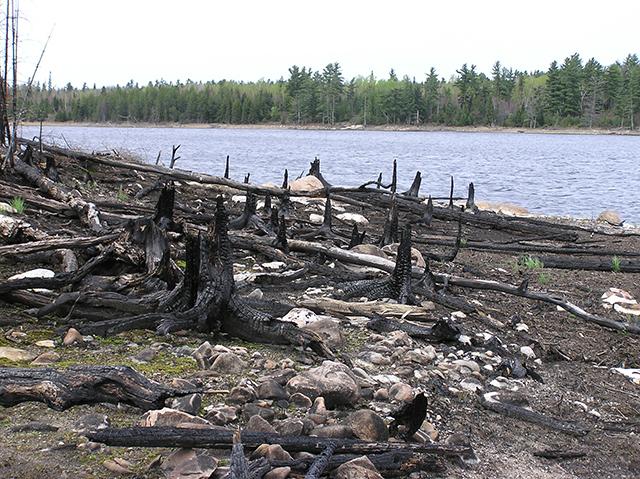 Photo by Mark Brigham
At Shoepack lake, trend measurements were confounded by two unanticipated natural disturbances: a forest fire and destruction of a critical beaver dam.

If you add sulfate to a wetland, even without additional mercury, you’ll stimulate additional sulfate reduction and you’ll get a big spike in methylmercury production.

On what surprised him the most in the data:

MB: I guess I was a little surprised at how well the trends agreed between methylmercury in the water column and in the fish, and how these matched the trends in measurements of mercury deposition. You would expect that they would agree, but both in the trend direction and the magnitude of the trend those two lakes matched up really well.

Brown Lake was another surprise — that wasn’t expected at all. It shows that not all the lakes are behaving so nicely, because of other factors in the landscape, which can cause the trend to go in the completely opposite direction of what you might expect.

Brown Lake is downstream from Oslo Lake, which wasn’t part of our study, but has been measured previously in the early 2000s and did have higher levels of methylmercury in its water column and in its fish.

Water levels in all the lakes we studied were increasing during the period of our research, and what we think happened was that this moved more water from this higher-methylmercury upstream lake into Brown Lake and drove the mercury trend upward.

In addition, Oslo is a wetlands-rich lake in terms of its watershed. Having large wetland areas in the watershed will increase methylmercury not just because of the larger deposition area, but because of more microorganism activity — sulfate-reducing bacteria, again — and then you also get more of this humic acid, or tannic acid material, dissolved organic matter, leaching out of the wetlands.

Both methylmercury and inorganic mercury bind very tightly to that material, so when it leaches out of the wetlands and into the lakes, it’s kind of like a teabag leaching its tea into the lake, and carrying mercury with it. And the mercury is held in the water column for a longer period of time than in lakes with less dissolved organic matter.

One more factor — that dark, tea-stain lake water doesn’t allow much light penetration, or UV penetration, and UV light can degrade methylmercury back into inorganic mercury.

In our earlier study, the one from 2006, we sampled a range of about 20 lakes in Voyageurs for a spatial assessment of mercury levels. Small, interior lakes again, most in the Kabetogama Peninsula but some to the south of Lake Kabetogama and some to the east, over toward Sand Point Lake.

The very clear lakes — the ones where you can see boulders on the bottom 20 or 30 feet down — we just almost never detected methylmercury in those lakes.

The lakes where you couldn’t see the end of your canoe paddle in the water, those were much higher in methylmercury, both in the water and in the fish.

On what has caused the recent lake-level rise:

MB: I think it was just higher summertime precipitation. They were coming out of a drought; earlier in the decade they had several dry years up there and lake levels had been drawn down some, but the last six or eight years have been more normal.

So it’s not related to management of water levels in the large lakes through the paper-company dams?

MB: No. These interior lakes do drain to the large lakes, to Rainy Lake, but they sit up so high that management downstream isn’t a factor. Beavers are the managers up there.

The full text of the Brigham team’s paper can be read here.