After two days of fairly short paddles, 12 miles on Sunday and 11 on Monday, Day 3 of our journey down the St. Croix was closer to 20 on Tuesday, and featured a lovely long run of mild whitewater for variety.

The main event for moving-water fans was the Kettle Slough, which leaves the main river and returns to it after a journey over rocks and drops. Some paddlers chose the more adventurous route, some the lesser, and some — your correspondent included — opted for the former but missed a turn and had to settle for the latter. 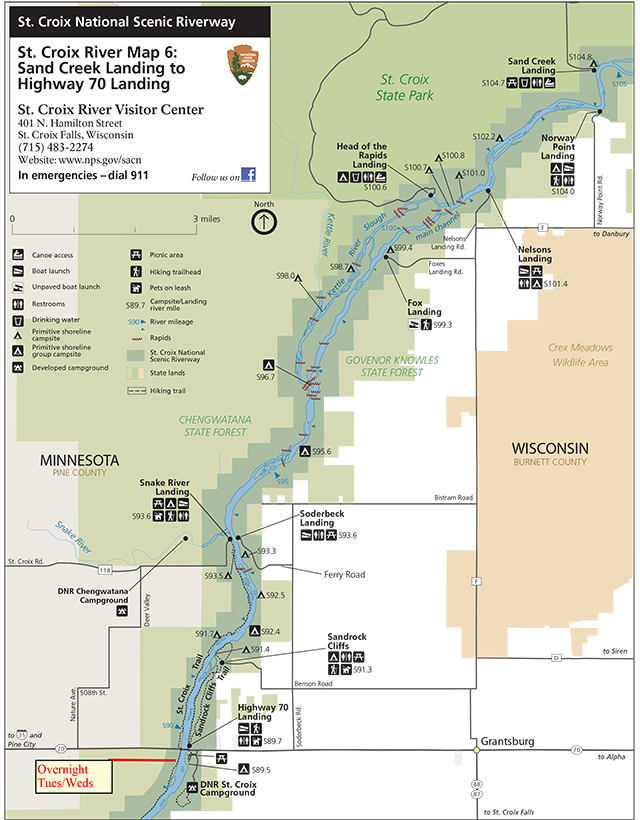 And happily so. For several miles today, all parts of the St. Croix offered at least modestly challenging riffles, standing waves and submerged obstructions to play with.

And the spray was more than welcome as temperatures climbed well into the 80s by midmorning and stayed there till dusk.

At one particularly lovely spot, the Sandrock Cliffs channel, many of us ducked into an untypically narrow and shady passage beneath towering bluffs, listening to hikers overhead but out of sight, and enjoyed a lazy drift in slow water and cool air. 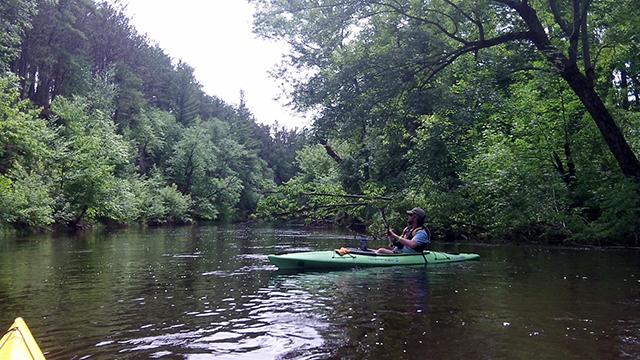 MinnPost photo by Ron Meador
In the cool of the Sandrock Cliffs channel.

Wildlife sightings reported today: many bald eagles, a smaller occipiter that might have been a sharp-shinned hawk, a possible Cooper’s hawk, tree swallows, cliff swallows, a scarlet tanager, several types of vireo, many turtles, some deer. No bears.

A solitary cedar waxwing that had been working the trees around my campsite for insects on Monday afternoon was back the next morning, unintimidated by all the activity as dozens of paddlers bustled about, packing gear for the day’s travel and comparing notes on the previous night’s windstorm that cut off all power to St. Croix State Park just after 9 p.m.

This also cut off some some coveted evening access to showers, not to mention sinks and flush toilets. As I write this 24 hours later, we are camped in a primitive campground of Wisconsin’s Governor Knowles State Forest, which has but pit toilets and wells but not much for washing up and we are a sweaty, sticky bunch. 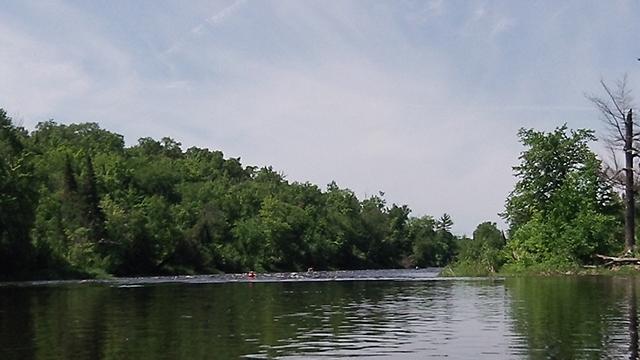 MinnPost photo by Ron Meador
The Croix turns from glass to rocky riffles.

Some are actually hoping for rain overnight so they can step out of their tents for a rinse.

Some days of this tour feature speakers, and this day featured two.

At the (unoccupied) Paint Mine campsite, the National Park Service‘s Jean Van Tatenhove led us through the peculiar story of one David A. Caneday, a would-be “copper king” who spent years looking for copper deposits in areas along the Wisconsin/Minnesota border in the late 1800s. 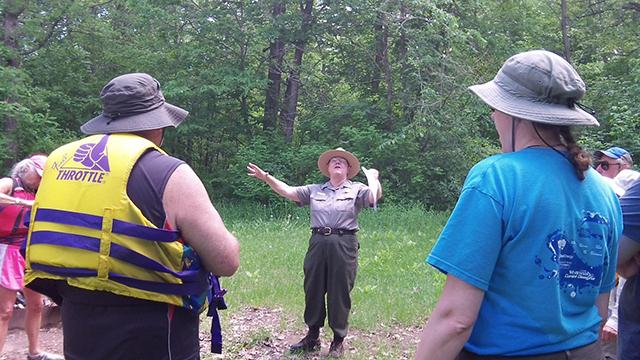 That didn’t work out so well, but in the 1890s, a bit north of Grantsburg, he discovered an unusual (and unspecified) mineral that could be mined, milled and mixed with linseed oil to make an apparently excellent paint.

He acquired partners, founded a company and built considerable infrastructure in the steep terrain — water wheels, pipes, stone walls and stairways, conveyors. Much of it remains in the overgrowth for viewing from a primitive trail.

The first question from our group was whether the venture had been a commercial success, and the answer was a simple no. Caneday apparently was not much of a businessman, and even less of a marketer and promoter in an age where advertising had become essential. A key partner died unexpectedly, and young.

But the strangest force against success in this failure narrative was that the paint was, essentially, too good. It formed such a hard and permanent surface that a single coat lasted much longer than competing products, and often even longer than the object that had been painted.

Today’s promoters could turn that into a winner. For Caneday, alas, it just meant each new customer was a one-time sale.

Van Tatenhove pointed us to a new biography of Caneday by Susan Segelstrom, and perhaps she reveals the secret mineral content of his paint. If anybody in the audience happens to know, please share what you’ve got below.

Our evening speaker was Kristi Pupak, a new young naturalist from the nearby Crex Meadows wildlife refuge, who gave us a passionate and comically hysterical presentation on the wild turkey, her favorite species to study. Also, to shoot.

I can’t possibly do justice to her story of her first foray into turkey hunting, which took place during finals week of her sophomore year at the University of Wisconsin-Stevens Point. Rather than spending early mornings at her studies, she instead went hunting each day for a couple of hours, coming up empty until the very last day, when she bagged a good-sized tom.

I can, however, show you a picture of how she got one member of our group — UK Sue, from Nottingham, England — to don and hold a variety of objects that represented, very approximately, some key anatomical parts of the bird: feathers, feet, snood, caruncles, and so on. 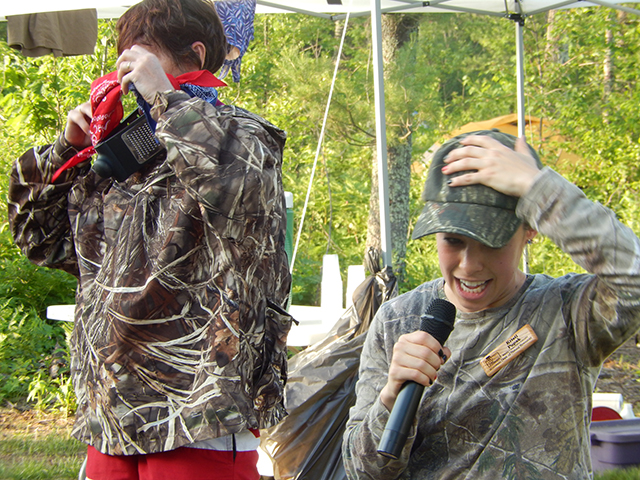 Turkeys were in serious decline across the U.S. at the beginning of the last century — thanks to overhunting, habitat loss, and disease transmission from domesticated birds — and by about 1970 were essentially extinct in Wisconsin.

Thanks to a reintroduction with 340 Missouri birds in 1976 — in a trade for Wisconsin ruffed grouse, which were drumming in the background as Pupak spoke — and an intense breeding effort, nearly 4,000 were available for released into the wild in less than 20 years. Similar efforts elsewhere have brought the wild turkey population nationwide to more than 7 million, she said.

A few other turkey facts: They can fly at 55 miles per hour, and run at up to 25. They have exceptional vision in daylight, but it falls off sharply in darkness, which is why dawn and dusk are the favored times for hunting.

Nowadays, a typical hen lays 10-12 eggs, but it’s unlikely that more than half of those will survive long enough to become capable of flight. Among adult hens, about 10 percent of the population is taken by hunters each year, while 74 percent fall to other predators.

Different story for the toms: Hunters take 61 percent, other predators about 36.

Oh, and it’s a good idea to know where the safety on your Remington 870 is, and how to release it, before that trophy tom strolls into range.