With surprisingly little press coverage or public debate, a Canadian nuclear-plant operator is moving forward with plans to build an underground vault for radioactive waste within a mile of the Great Lakes — specifically Lake Huron, near the Ontario tourist community of Kincardine.

Ontario Power Generation does not propose to store spent fuel in the repository. But everything below that highest grade of waste — from discarded reactor-core parts, at the hotter end of the scale, to ash from incinerated cleaning materials at the other, all of it accumulating aboveground since the 1960s — would be buried in what appears to be the first deep-storage dump for nonmilitary nuke waste in North America.

Construction could start as early as next year, according to OPG’s timetables.

Some of the smaller newspapers in Michigan have been bird-dogging the project and the protests raised by most of that state’s congressional delegation. But you’ll be hard-pressed to find much recent coverage in larger, mainstream outlets on either side of the border.

One exception: an interesting analysis in last Friday’s Toronto Star observing that nuclear energy policy isn’t much of a political issue in Ontario, not even in the runup to next week’s provincial elections, not even with ratepayers facing a near-term bill for $25 billion to refurbish two large power stations, including the one at Kincardine.

Although the province gets more than half its electricity from splitting atoms, the New Democrats oppose any new reactors, the Liberals say there’s no current need for expansion, the Conservatives call softly for more capacity… and none of the above are making much noise about their differences.

In any case, government-owned OPG is under a court order preventing it from building new capacity anyway — “in part because there are no firm plans for handling waste that will remain dangerously radioactive for hundreds of thousands of years.”

The one issue none of the parties address in their formal platforms is OPG’s proposal to entomb low- and intermediate-level radioactive waste in a limestone formation 680 metres below ground on the shore of Lake Huron. …

The proposal took a new twist in February when a similar waste storage facility in Carlsbad, New Mexico [run by the U.S. military], leaked radiation. Investigators are still probing the accident, and are zeroing in on a waste container that seems to have been damaged by extreme heat.

No one’s certain what caused the container to heat up, but the most likely cause seems to be kitty litter — presumably used to mop up a liquid spill — that somehow reacted with some of the waste nuclear material.

An issue for the entire basin

A week earlier, the Detroit Free Press reported that the Michigan legislature was considering resolutions and other symbolic legislation to draw more attention to the issue, and to seek engagement of the U.S. State Department and the International Joint Commission, which deals with transboundary water issues if both nations agree to its involvement.

Environmental groups are beginning to ramp up their efforts as well, including  launch of an online petition drive at www.protectlakehuron.com/, which takes the position that “this is a basin-wide issue … this has as much effect in New York, Wisconsin and Minnesota as on anybody.”

Not to mention Illinois, Indiana, Ohio and Pennsylvania. Also, come to think of it, Quebec. 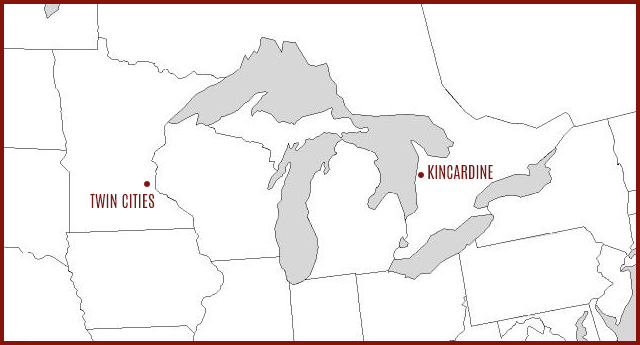 But even at ground zero for the project — Kincardine, a city of 11,000 on Lake Huron’s eastern shore — opponents seem to be having difficulty marshaling much concern among Canadians.

From an AP feature last November:

Ordinarily, a proposal to bury radioactive waste in a scenic area that relies on tourism would inspire “not in my backyard” protests from local residents — and relief in places that were spared.

But conventional wisdom has been turned on its head in the Canadian province of Ontario, where a publicly owned power company wants to entomb waste from its nuclear plants 2,230 feet below the surface and less than a mile from Lake Huron.

Some of the strongest support comes from Kincardine and other communities near the would-be disposal site at the Bruce Power complex, the world’s largest nuclear power station, which produces one-fourth of all electricity generated in Canada’s most heavily populated province. Nuclear is a way of life here. …

Kincardine is among several small communities hugging the shoreline in southern Ontario’s Bruce County, which has miles of sandy beaches popular with tourists — particularly from Toronto, about three hours southwest. The downtowns are lined with shops, restaurants, parks, museums and woodsy footpaths.

The area’s first nuclear plant was built in the 1960s in countryside north of Kincardine. The sprawling Bruce Power site now has eight reactors and employs about 4,000 people. [Mayor Larry] Kraemer says about half the jobs in his town of 12,000 are connected to the industry.

As you might expect, there is the usual argument over safety between OPG officials who say the repository plan has been studied to the nth degree and found to be foolproof, and challengers who say that fractures in the bedrock create the possibility for radiation to escape and enter the Great Lakes.

One notable commentary, reported in the Huffington Post, came from a scientist who has experience on both sides of the question and is deeply concerned.

An OPG spokesman told the Toronto Star that while Greening’s numbers may be valid, they don’t change findings that the facility will be safe. Greening acknowledged that possibility, but called their overall procedures into question in an interview with Michigan Radio.

“My first feeling was, look, you messed up the most basic first step in establishing the safety of this facility, namely, how much radioactive waste they’re going to be putting in the ground, you admit you got that wrong, but now you’re telling me that everything else is okay,” Greening told Michigan Radio. “You can’t just fluff off this error as one error. It raises too many questions about all your other numbers. And I’m sorry, I now have lost faith in what you’re doing.”

Michigan Radio’s audio feature on the project, including the Greening interview, can be found here.

The 2010 Reference Inventory report which Dr. Greening references provides an estimate of the final projected inventory that would be placed in the DGR by 2062. OPG was aware that this was an estimate and has continually worked towards improving the projection. The construction of the DGR, pending a successful regulatory approvals process, is still several years away.

It should be noted the DGR safety case was developed knowing that the inventory was uncertain. The safety case considered the implications of uncertainties through conservatisms in the analysis and through sensitivity studies, to ensure a large envelope of safety well beyond the anticipated impact. The DGR design, the location at 680 metres beneath the surface in low permeability limestone and the properties of the rock formations in and around the repository provides this large envelope of safety. OPG checked the implications of Dr. Greening’s analysis and the safety case for the DGR Project remains valid. Any future revisions to the reference inventory will be reflected in updates to the DGR safety case.

I found that response at OPG’s main page on the project, which is here.