When the the sun went down on Thursday evening, the rain seemed finally to have subsided for good, and our group of 61 paddlers had shrunk by 18.

A few had planned their early exits before setting out six days earlier, for various reasons. Several live in the St. Croix Valley and were simply taking out close to home rather be shuttled back and forth along portions of river they see and paddle all the time.

Illness and minor injury made a few subtractions. One young woman was stricken by heat fatigue early in the trip but returned after medical treatment; another sprained a wrist and elected not to make things worse. Others left and didn’t come back.

But rain has been the most significant weather factor during this week-long journey down the St. Croix, and 10 people decided at lunchtime yesterday that misery had reached the point where they were ready to pack it in. 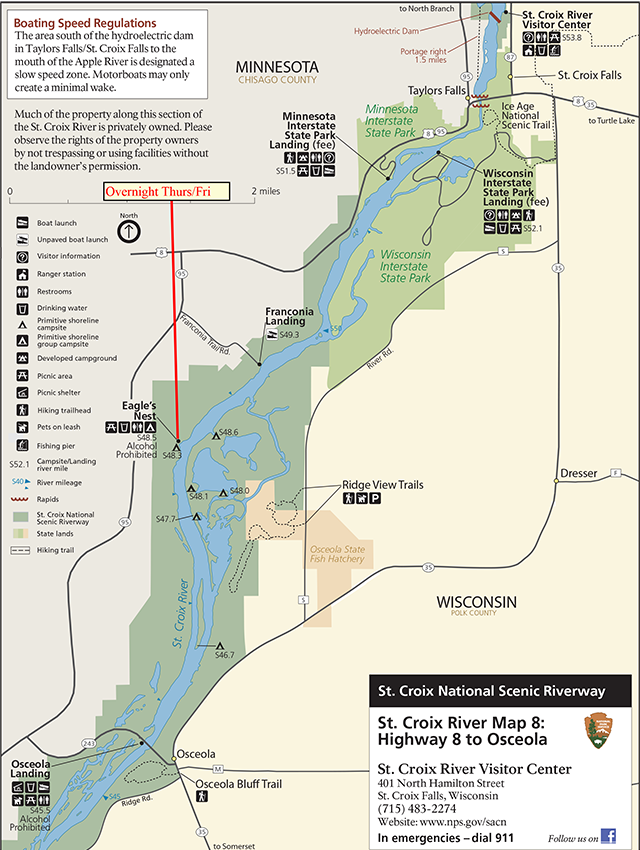 The rain that began around dawn on Thursday was of a pelting, soaking sort and occurred at the worst possible time of day for this kind of trip, when gear must be gathered and stuffed away for the day’s travel with no time for drying beforehand.

At the morning briefing, trip leader Deb Ryun invited everyone to consider that rain is just another reality of trips like these, and that even the rainiest day on a river like the St. Croix might compare favorably with a day at the office, dealing with torrents of other trouble.

The group applauded that philosophy, but in a muted way that suggested they were sharing it less than whole-heartedly. And then we scattered, to jam everything not needed on the water that day into duffles and plastic tubs for shuttling to the evening campsite.

I shuttled to the launch site with a group that included Jim Fitzpatrick, the birder I wrote about yesterday, and he was asked about some strange animal noises in the night. Just the kind of question we’ve learned to bring to him.

“The first one was a rabbit dying,” he said. “Being finished off by a predator, probably an owl.

“The second was two animals fighting, raccoons or maybe mink. Probably over food or trash that somebody kept at their tent instead of stowing in the truck overnight.”

Heavy rain and significant headwinds continued throughout an eight-mile run downriver to Taylors Falls, where the Lions Club had prepared a special welcome and served us a brats-and-burgers lunch under canopies.

A local journalist reported to someone in our group that the rainfall had already set some kind of record for the area. But as we ate, the sky began to lighten and the forecast improved — rain to end within the hour and to generally stay away for the rest of the day, with a possibility of light showes in evening.

But when Ryun offered the option — pointedly without endorsement — of arranging a special shuttle to haul paddlers and their boats to the trip’s final takeout just above Stillwater, for a fee that could range from $15 to $150 depending on the number of takers, postponing till later the problem of retrieving their gear from the truck that hauls it from campsite to campsite, 10 people took her up on it.

The rest of us loaded our boats on trailers and shuttled to the other side of the Xcel Energy dam that spans the river between Taylors Falls and St. Croix Falls.

Soon we were sprinting the three miles downstream to a National Park Service campsite just below Franconia Landing, where some of the best weather of the week was waiting, and residual discouragement faded in the course of pitching tents, rigging clotheslines and drying stuff out for the paddle’s final stretch today. 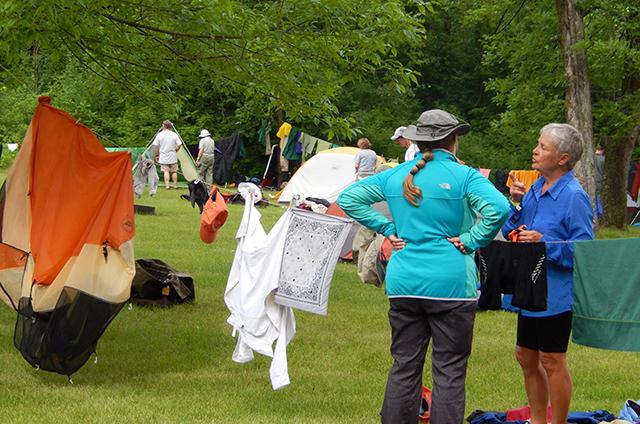 Birds and birdsong were scarce along the river on Thursday, except for eagles, herons and tree swallows, the latter making their darting, bat-like flights just above the surface, shoulder-level with the kayakers that outnumber canoeists about nine to one this week.

I started out near the back of the pack this day, having struggled with failing batteries and a weak cell signal as I tried to get words and pictures from a picnic table in the woods to the MinnPost editors in Minneapolis.

Our subcommittee of five kayaks and three canoes steamed along at first, making up for lost time, and a great blue heron on the Wisconsin shoreline entertained us with a pattern of taking flight as we drew alongside, flying about 20 yards downriver, waiting for us to approach and repeating the pattern.

I’ve seen herons do this many times, but typically putting at least three times as much distance between itself and the humans. And I’ve seen them do it two, three, four times before moving well out or range; this one did it about 20 times.

There comes a point in each long paddle trip where I need to pull away from company and step on the gas, and Thursday morning seemed perfect.

The river was still beautiful in the rain, of course, but I was feeling just a little cold and just a little hungry, not just for bratwurst but also for solitude and the the pleasure of pushing my now de-rusted forward stroke form into high gear.

So I stepped hard on the gas — or at least the foot pegs — and started burning for Taylors Falls, watching the lovely shoreline go past at a steady six knots.

Best wildlife sightings of the day were in the campsite.

A huge softshell turtle and two map turtles were laying eggs at the site, the softshell up on the gravel access road and the others in the grass. 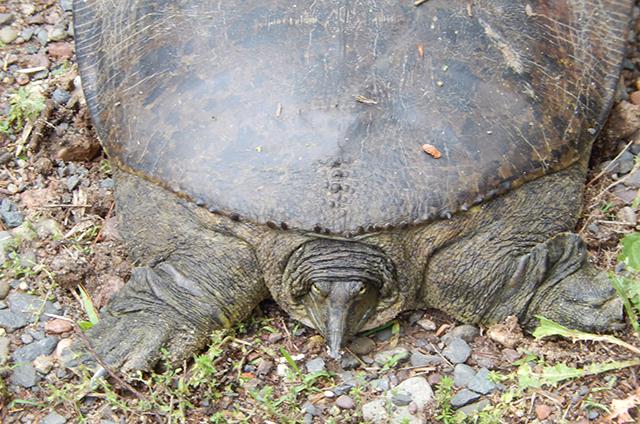 Dale Cox, a National Park Service ranger, identified them for us and said this particular site is a big draw for turtles in the egg-laying season because it’s sunny, sandy, well-drained and close to the river. As many as eight species are frequent nest-builders here.

On the other hand, it’s wide open to raccoons and other predators that find the nests and dig out the eggs.

After dinner, Cox gave a stirring presentation on the values and virtues of rivers in general and the St. Croix — where he has been posted the last 18 years — in particular. 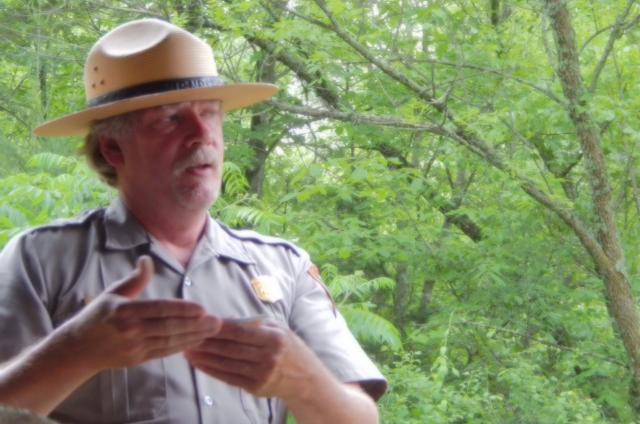 Cox grew up on a little river that is no more — an idyllic-sounding place of fishing, hunting, canoeing and childhood exploration — in a little southern Missouri town called Branson.

His interests run to literature and history, and his presentation drew on a line of writings from John Muir and Increase Lapham through Aldo Leopold to Walter Mondale and Gaylord Nelson, the fathers of the St. Croix’s protection in the nation’s collection of wild and scenic rivers.

It was inspiring stuff, but another part of his talk was sobering, for it suggests that intense rain events of the kind we’d just been through, and the unseasonably high water levels we’ve been riding all week, may be parts of a new normal.

Drawing on measurements from a U.S. Geological Survey river gauge on the St. Croix, Cox presented a chart showing that the flows this year since mid-April have been entirely outside the median values recorded for over a century at the gauge, which has been operating since 1902. 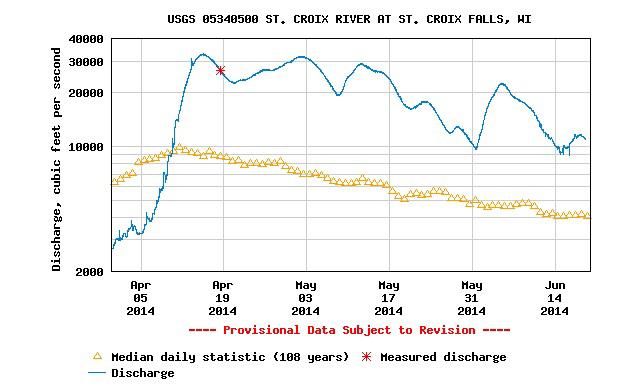 Between 1902 and May 2012, he said, the daily median flow at this gauge went over 30,000 cubic feet per second 145 times. Just for clarity, I’ll note that these are not momentary spikes, but rather the average flows for 24-hour periods.

“Climate change,” a few quick studies in our group called out, and Cox nodded agreement. Many things about the river’s hydrology have been strikingly different for the last several years, and there’s no reason to think the old patterns will return any time soon.

On the St. Croix, intense rain trims the paddling group — and suggests a new normal