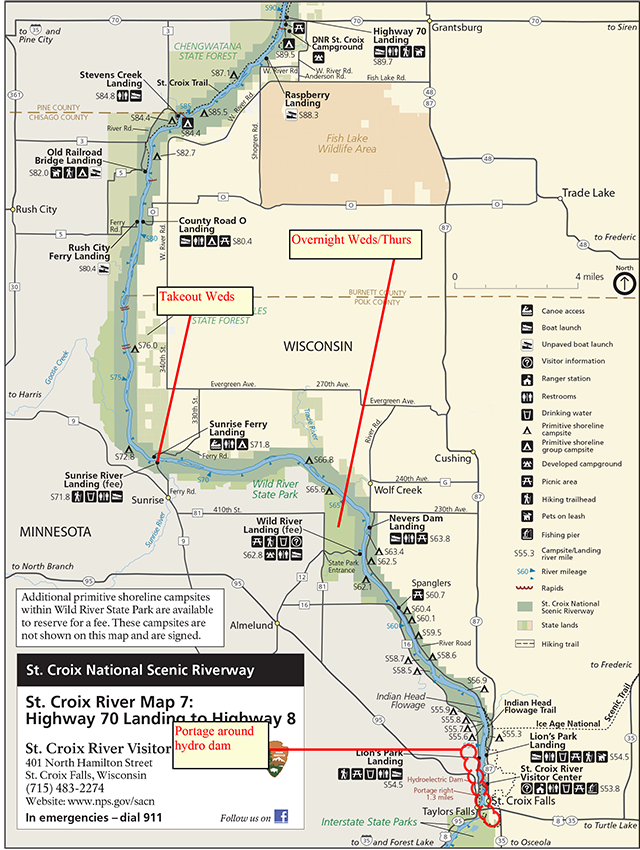 It’s hard to imagine a better day on the St. Croix River than the one that unfolded Wednesday, as I paddled about 18 miles from Governor Knowles State Forest to Sunrise Landing. The weather was dry and cool, the winds were light, and I was talking birds with Jim Fitzpatrick. 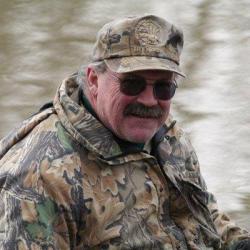 I had met Jim briefly on last year’s trip. He was recently retired from a  38-year career as a naturalist, the last 32 of these at Carpenter Nature Center near Hastings.

I knew the man knew his birds and so last Monday morning, when our party was buzzing with excitement over ravens that had been noisily circling the campground for an hour around dawn, I asked his opinion.

“Juvenile crows,” he said,  “no question about it. What happened was, they were hungry and calling on their parents to bring food. The parents insisted that they fend for themselves. Very common scenario this time of year.”

Would it be unusual to see a raven in that area around Danbury? He thought it would be — mildly disappointing your correspondent, who shared the others’ general excitement at the notion of ravens turning up in our midst from time to time this week.

We talked a bit longer, about other birds seen along the river so far, and I asked if I could join him for some on-water birding before the trip was out. He was agreeable, and so yesterday we set out together from St. Croix State Park.

Jim paddles a solo canoe, a venerable Old Town with a yellow hull and new wooden gunwales that he cut, steamed and installed last year. He moves it with impressive grace and efficiency, having learned to let the river do a maximum share of the work, which in turn maximizes his ability to watch and listen to his surroundings.

“This time of year, most of our observations of birds along the river will be by hearing their song rather than seeing them in flight,” he said. “They have eggs in the nest and they’ll stay under cover as much as they can.

“Later on, after the young ones come, they’ll go silent because of predators, and the river won’t be such good place for birding for a while. Come back during the fall migration and you’ll see lots and lots of birds.” 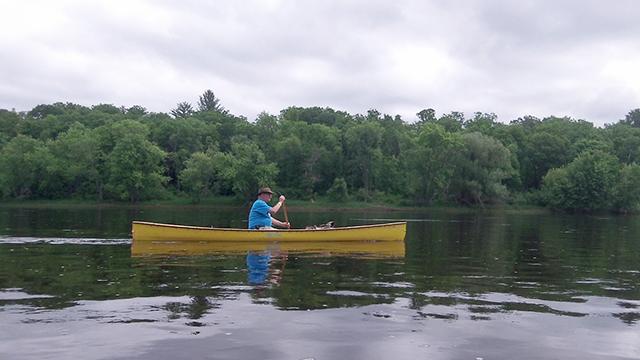 MinnPost photo by Ron Meador
Jim Fitzpatrick on the river.

Nevertheless, we saw some spotted kingfishers, many a tree swallow, red-eyed vireos, yellow vireos, warblers too distant to identify, a scarlet tanager, an indigo bunting. At least half the time, I would say, Jim was identifying birds so distant I could barely see them in silhouette.

We saw some larger birds, chiefly bald eagles, great blue herons and turkey vultures, who don’t have to worry much about predation (although we enjoyed the sight of a distant eagle being harrassed in and out of the canopy on the other side of the river by a handful of smaller birds, swarming behind it like hornets).

Also a pair of mallards, which even I could have identified though they were passing a few hundred yards ahead of us. I couldn’t have told you the female was in the lead, however, as Jim told me.

Nor could I have described to you the “rape flight” of mallards, in which a female leads a string of five or more males in a desperate chase, with her actual mate last in the queue. The result, often, is multiple impregnations and probably some improvement in the genetic makeup of her young.

But our focus was on birdsong, which remains for me a mystery on the order of music from an alien culture, a kind of orchestral piece in which I can hear the different melody lines but don’t know the instruments, can’t distinguish their voices, can’t separate the notes and attribute them to different players, let alone name the players.

Listening for their tonal quality

But I may have learned from Jim’s example a technique of describing the songs less in terms of their pitch, nor even their “melody” than their essential tonal quality — percussive, scraping, trilling, piping: “You hear how that one sounds like it’s blowing through a tube?”

Over the course of three hours or so, we heard most of the smaller birds listed above, along with many others that never happened into view: yellow-eyed vireos, song sparrows, rose-breasted grosbeaks, orioles, more warblers …

I cannot really do the list justice, it being impossible to paddle a kayak and make a list at  the same time — at least while moving at our pace, which was sprightly.

Birds began to interest Fitzpatrick at a young age, when he assisted a prodigious bird-bander, Jane Olyphant, with her work when she came to his family’s home in North Oaks. He remembers well the day she found a woodcock in one of her mist nets there, becoming the first to band one of these birds.

They also caught the interest of his younger brother John, who is director of the Cornell Laboratory of Ornithology.

Ask Jim if he considers himself an ornithologist, though, and the answer is a firm no. “Often I point my finger for emphasis: I am not an ornithologist. That’s a whole different approach to birds, a different relationship with them.

“But I love birds, and yes, you could say they are the most important single part of the natural world to me.”

In search of the ivory-billed woodpecker

Birds were the main focus of his university studies in biology, and over the years he has participated in plenty of ornithological research, including multiple trips to Louisiana, Arkansas and Texas in the early to mid-2000s in search of the ivory-billed woodpecker, the “Lord God Bird,” which was last officially sighted in the 1940s. 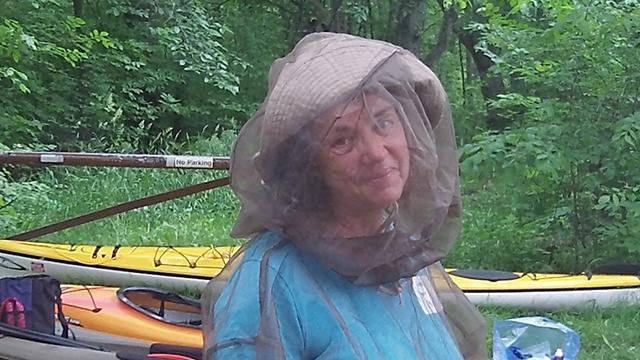 MinnPost photo by Ron Meador
Bugs are bad along the river.

Scattered, unconfirmed sightings reached the point that The Nature Conservancy organized a corps of expert birders to monitor likely habitats and in 2004, Fitzpatrick was rewarded with a 10-second view of a bird he is confident was the object of all this searching.

If 10 seconds sounds brief, it’s five times longer than the next-best sighting and more than twice as long as the famous four-second video clip that may have been subjected to as much enhancement and analysis as the Zapruder film of the JFK assassination.

Fitzpatrick’s list of favorite birds is headed by the common grackle, but his interests range widely and he considers himself reasonably proficient with all the groupings of birds except for shorebirds, which are not plentiful here.

I mentioned my abiding fascination with corvids — crows, ravens, jays, magpies and others — and it turns out magpies are one his favorites, too, for their size and beauty and intelligence.

His sighting of a pair of magpies at his lake place near Itasca State Park stands as the easternmost sighting of this species, which is more typically found in the intermountain west.

The sighting was so far outside the bird’s “official” range that at first he wasn’t able to enter it in the online database maintained by Cornell, but brother John was able to fix that.

I asked what advice he offers novice birders like me for sharpening their observation and classification skills, and was surprised to hear him say he likes to start with behaviors first, then move on to markings, sizes and other keys to avian taxonomy. (A system in the throes of change, he said, as DNA analysis inspires regrouping based on genetic instead of physical similarities, which don’t always match up).

As for learning to identify birds by song, he said, there are no shortcuts: Get a smartphone app or set of recordings and listen to them until the differences begin to emerge, and the attributions begin to stick.

As we drifted toward Sunrise Landing and the end of our paddle day, Jim gave a short course in distinguishing the calls of tree frogs from leopard frogs from toads.

And then a huge black crow flew out of the trees and crossed right in front of us with a great, scraping, ratcheting call … ?

St. Croix paddle: birding by song with a naturalist, on the way to Sunrise Landing