Earth Journal writer Ron Meador will be posting daily this week from the St. Croix River.

No long paddle trip proceeds without a bit of unanticipated adventure and adversity, a reminder that a great many things can always go wrong.

Day Two of this excursion down the St. Croix began with the awarding of two crowns (orange baseball caps) to Linda and Marty for handling a pair of capsizes that occurred essentially unnoticed by the larger group in the high winds and drizzle of Day One.

Marty is a newer paddler, recently retired from a nursing career, and chose a smaller kayak for this adventure on the river.

Linda, who worked alongside Marty, is a longtime paddler accustomed to Boundary Waters treks and the standard aluminum touring canoe, and is solidly in the middle-age range that dominates our cohort.

For this trip she wanted to try a small, river-oriented kayak but fell under the spell of a Old Town solo canoe, a 12-footer in Royalex with the nice cane seat, minimal keel, considerable charm but also, alas, a lot of freeboard, and thus a lot of profile exposed to the wind.

Anybody who has ever tried to paddle a canoe alone in winds from any direction other than astern can guess what kind of struggle she faced in gusts that were typically over 20 miles an hour and sometimes approached 30. 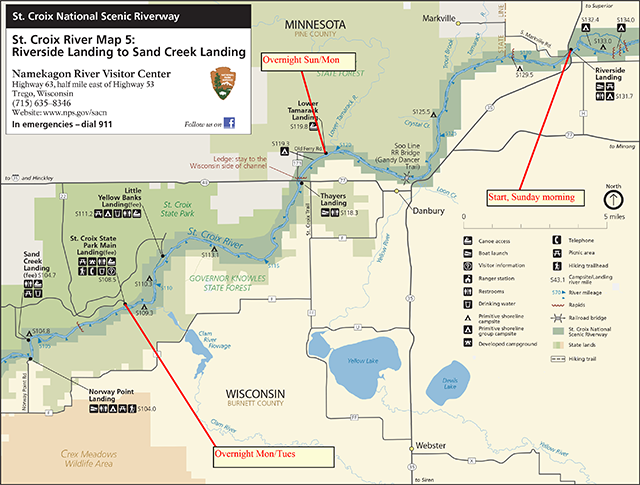 Days 1 and 2 of the journey. Click the map to download a PDF showing the full week’s route.

She is not a large woman, and the boat held very little gear except for a camera and binoculars bagged and tied to a thwart. The wind pushed her this way and that as she struggled to keep the bow straight into the wind, right up to the moment it drifted slightly to one side and the canoe flipped upside down in high, fairly fast water.

Linda lacked a whistle to signal with, and Marty almost didn’t hear her calling for help. When she reached her friend, she said, Linda — “all four feet 10 of her” — was hanging onto the upturned boat and trying to swim it to shore.

Linda was able to right the boat despite the wind and current, and began to empty water with a bailer she had thought to bring, while Marty pushed her kayak upstream and down, upstream and down, looking for other paddlers to assist.

No luck — though there were more than 60 paddlers in the group, flukes of launch timing and variations in paddling pace had left the women in a long, empty space.

They started downriver again, no other option seeming preferable, and within 15 minutes the exact same capsize recurred, followed by the exact same scenario of Linda righting and bailing the boat while Marty paddled up and down for a half-hour, maybe longer this time, scanning in vain for help. 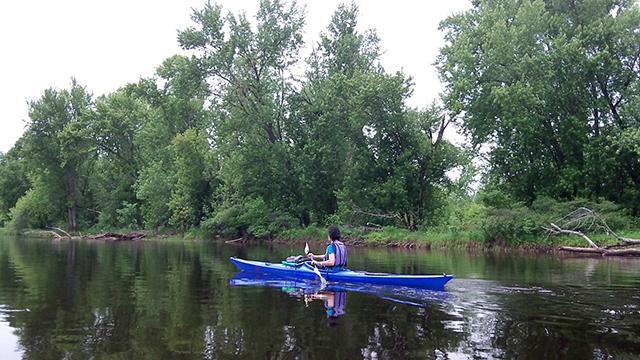 Eventually, it all came out just fine. Though Linda was ready to ditch the boat and hitch a ride on someone else’s, Mark came along in his pedal-operated kayak and offered her a tow line that would keep her bow into the wind sufficiently to finish the 12-mile stretch.

But the Old Town is on the trailer and staying there. Linda has taken a spot in a tandem canoe with a paddler whose original partner had to cancel, and will be looking for a kayak for future adventures.

“I don’t do well with failure,” she said, “but in the end it’s just a boat I got on Craigslist and can put back on Craigslist. It could have been worse.

“And I’m a realist — I’m 4 feet 10 and a half, older than I used to be, not as strong as I was when I was wrestling a 66-pound aluminum boat. This was just the wrong boat. But I’ll find the right one.”

Speaking of unanticipated adventure and adversity, I am making these paragraphs at about a quarter to eight on Monday evening, having stayed after the evening program to go indoors during a sudden and rather fierce windstorm.

No idea what the wind speeds are, although I will endeavor to find out in the morning. But they’re loud. Shrieking, in fact, and 100-foot trees outside the window are waving like dandelions in a breeze. 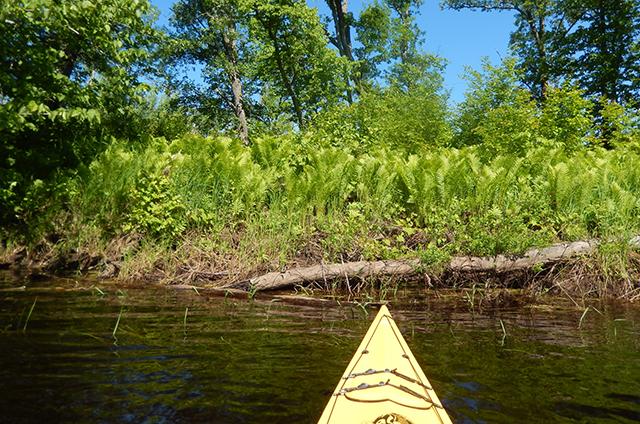 MinnPost photo by Ron Meador
Ferns so thick you expect a dinosaur to poke its head out.

All in all, enough that my usual routine of writing on and by the light of my iPad, on a picnic table in a pine grove, isn’t going to work so well just now.

I could have gone into my tent, I suppose, had I brought my tent. But this year I’m using my old backpacker hammock, tied up (today) to a pair of fortuitously thick and flexible red pines. I fully expect it to be there when the writing’s done and the sun’s down.

But you never know.

You never know, too, whom you’re going to meet on these trips, but there are always surprises, and I can’t think of a one that wasn’t pleasant or broadening or both.

Yesterday afternoon, I paddled up alongside a tandem canoe and met Johan and Troy, two émigrés from South Africa. With Al and his adult son Alwyn, plus Mark, that makes five South Africans on this trip. 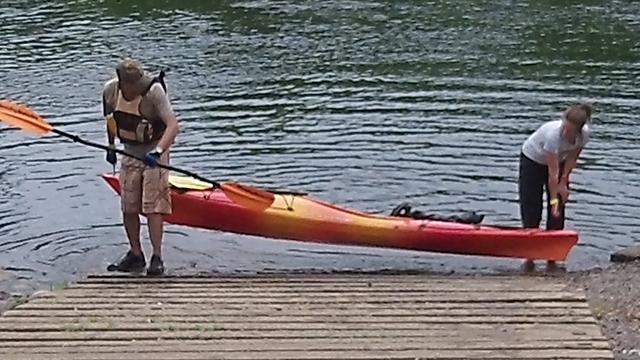 MinnPost photo by Ron Meador
Coming ashore at the end of River Day 2.

This more than doubles, at least, the number of South Africans I’ve met in my lifetime thus far. There was the dean of my journalism school, back in the 1970s, and possibly a newspaper colleague in New York whose name and details I just can’t recall.

All five of these men are white. All have come to the U.S. in the wake of apartheid’s end, Mark some 20 years ago and Troy about 15 years ago, Johan in between them and Al and Alwyn just six years ago.

Johan, 56, recently gained U.S. citizenship and said with wry humor that this makes him truly an African-American. If there was racial rancor in that comment — and, truly, I couldn’t tell — it was the only moment our conversation veered into that territory.

Hearing about conditions back home

I wanted to know everything about their experiences, and I didn’t know where to begin. This being a river trip, I simply said, I’m writing about this trip and this group for MinnPost, and I’d like to hear your story. 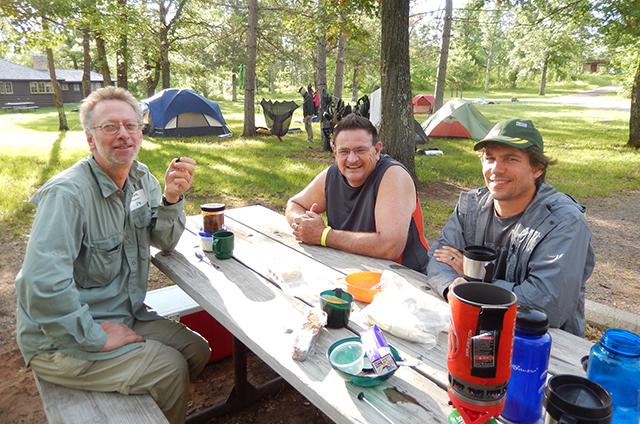 What I heard was a complicated tale of economic decline, shrinking opportunity, government ineffectuality and — running through it all — an atmosphere of constant criminal violence and personal insecurity that I think most Americans might find incredible, certainly untenable.

Johan’s aging mother lives in a Johannesburg suburb. Her community is walled off and gated. Her home is walled off and gated, with a garage door that locks once she’s inside. The windows are fitted with steel bars and grates; so are the exterior doors. So are some interior barriers placed to slow any intruders who get that far.

There is an alarm system, too, which nobody expects to bring real help in time.

Johan’s biggest worry isn’t that his mother will be attacked in her home. It’s that she’ll be stricken by illness, or that the house will catch fire, and she’ll die in this self-made prison.

Troy, who is 41, told me that one gets used to living in these conditions, that being on constant alert becomes a habit; life goes on.

His sister had her windshield fitted with some kind of reinforcing foam that allowed her to laugh at hijackers attempting to smash it with bricks. He had his car fitted with extra locks, an engine immobilizer, a steering-wheel lock, a special pin through the transmission to freeze it.

Still, the constant mayhem and the mounting toll among family, friends and colleagues reached a point where he was ready to leave. But his wife was not.

Then, in the space of a few days, their home was cleaned out by burglars, they found an intruder sleeping in their car, in their driveway, and his wife missed by minutes two robberies, by attackers armed with AK-47s, of stores she managed. That changed her mind.

Throughout these talks I kept listening for something that sounded like lost white privilege, or class privilege, painted up to look prettier. I didn’t hear it.

I asked Troy if he felt the authorities were indifferent to crime or simply overmatched. He said he thought it was a problem of vast criminal activity compounded by extensive police corruption, each perpetuating the other.

No rancor. More like deep sadness. We were looking at a gorgeous river under a cloudless sky, but I felt he was missing his home.