At a radar installation in Alaska, accelerating shoreline erosion has damaged a runway sufficiently to limit its use to helicopters and small aircraft, restricting access to the facility in the short term and raising a threat of long-term impairment to portions of the nation’s Arctic early-warning system.

At a military base in the Pacific, precise location undisclosed but probably Hawaii, a recent episode of rain lasting 43 straight days flooded base housing and caused mudslides that damaged base infrastructure.

And at Fort Irwin, in California’s Mojave Desert, a year’s worth of rain fell in 80 minutes one day last August, causing $64 million in damage to “more than 160 facilities — including a barracks building — 8 roads, 1 bridge, and 11,000 linear feet of fencing.”

These are but three examples of the here-and-now impacts of climate change on U.S. military bases, as gathered by the Government Accountability Office for a report on Pentagon preparedness that came out last week with little fanfare (or media attention, so far as I can detect).

The focus of the report is on what the Defense Department is doing to adapt to such problems, and the GAO’s conclusion, simply put, is: not nearly enough. Top Pentagon officials who reviewed the findings generally agreed.

While the U.S. military has been acknowledging the problem of climate change in its planning documents since at least 2010, the GAO auditors found, it has yet to prepare any concrete plans for addressing them, nor set any clear timetable for doing so.

And although most military decision-makers interviewed for the audit seemed to grasp the realities of advancing climate change, many said they felt a lack of guidance on what they should be doing about it.

At the base commander level, moreover, necessary adaptation projects are rarely proposed because, even at this rather late date, “the services’ processes for approving and funding military construction projects do not include climate change adaptation in the criteria used to rank potential projects,” which puts them at a scoring disadvantage with other work.

Perhaps we can all agree that if there’s one area where over-adaptation to the risks of climate change might be justified, it’s national defense and security. 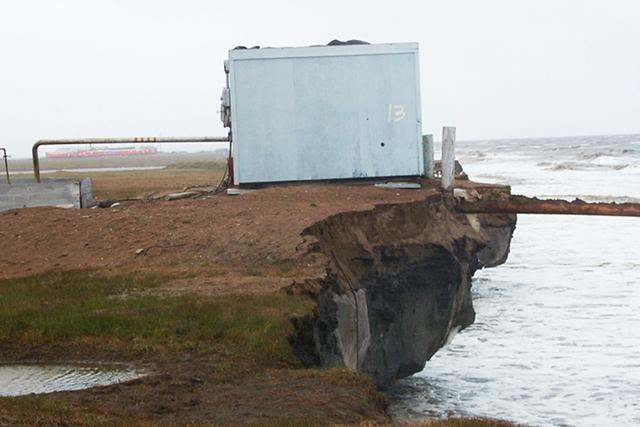 U.S. Navy
Coastal erosion in Alaska threatens a radar installation, one among many in the Arctic early-warning network that are affected by erosion or melting permafrost.

But it turns out that this, too, is a topic ripe for political manipulation by the Republicans who control the U.S. House.

The Pentagon authorization bill the House approved in late May includes a prohibition against spending any of the money to implement conclusions of four major documents that guide rational thinking on climate change and adaptive responses, including this year’s reports from the U.S. Global Change Research Program (which produces the National Climate Assessment) and the Intergovernmental Panel on Climate Change.

Why on earth? According to sponsoring Republican, David McKinley of West Virginia, in a memo obtained by the Huffington Post:

This amendment will prohibit the costs of the President’s climate change policies being forced on the Department of Defense by the Obama Administration. The climate is obviously changing; it has always been changing. With all the unrest around the [world], why should Congress divert funds from the mission of our military and national security to support a political ideology?

And it passed on essentially a party-line vote, with just four Democrats voting for the measure and three Republicans against.

The GAO report is an interesting blend of security-minded imprecision about exactly where among the Pentagon’s 7,500 installations certain climate impacts are showing up, coupled with photos and videos to document the damage.

It sorts the climate impacts into five broad areas where base officials had observed changes capable of causing significant impacts. Here are excerpts from its key findings in each:

At 8 out of 15 locations we visited or contacted, 22 officials stated that they had observed rising temperatures and associated potential impacts or mission vulnerabilities. … For example, the combination of thawing permafrost, decreasing sea ice, and rising sea level on the Alaskan coast have led to an increase in coastal erosion at several Air Force radar early warning and communication installations. According to installation officials, this erosion has damaged roads, utility infrastructure, seawalls, and runways. …

Daily operations at these types of remote radar installations are at risk due to potential loss of runways, and such installations located close to the coastline could be at risk of radar failure if erosion of the coastline continues. Air Force headquarters officials noted that if one or more of these sites is not operational, there is a risk that the Department of Defense early warning system will operate with diminished functionality.

At 9 out of 15 locations we visited or contacted, officials stated that they had observed changes in precipitation patterns and associated potential impacts [including the 43-day rain event mentioned above]. … By contrast, officials provided examples of impacts from reduced precipitation — such as drought and wildfire risk — and identified potential mission vulnerabilities — such as reduced live-fire training. …

For instance, officials also told us that for the last 3 to 4 years, there has been a continuous drought at another nearby installation, which has led to an increased number of wildfires in the area. As a result of a 2012 wildfire, officials were unable to access or move ammunition at that installation for 4 days. At a third installation in the same area, officials explained that these drought conditions — and the threat of wildfire — have limited the types of ammunition that can be used on certain training ranges.

At 12 out of 15 locations we visited or contacted, officials stated that they had observed increasing storm frequency and intensity and associated potential impacts such as flooding, or mission vulnerabilities such as temporary or prolonged disruption of military operations. …

For example, officials at an installation located in the desert Southwest explained that flash flooding due to an intense rain event had made one of their emergency runways unusable. According to these officials, it took about 8 months for the flooding to subside. During that time, aircraft performing training and testing missions could not use the emergency runway.

At 7 out of 15 locations we visited or contacted, officials stated that they had observed rising sea levels and associated storm surge and associated potential impacts, or mission vulnerabilities. … Officials on a Navy installation told us that sea level rise and resulting storm surge are the two largest threats to their waterfront infrastructure.

At 3 out of 15 locations we visited or contacted, officials either stated or noted that they had observed changes in ocean temperature, circulation, salinity, and acidity at their installations and that these changes may result in impacts, or mission vulnerabilities. …

For example, an official at a Navy installation explained that changes in ocean temperature may have caused a protected turtle species to nest on a section of beach where it previously had not, making this section unavailable for potential training activities during certain parts of the year. Also, the encroachment plan of a Marine Corps installation we visited states that increases in ocean temperature could lead to degradation of coral reefs in the waters offshore of the installation.

The full report can be read here.

Climate change is visiting fire, floods and other harm on U.S. military bases