Distribution of plastics as sampled by the research ship. The blue dots show the lowest concentrations and the red show the largest.

New research suggests that conventional estimates of the amount of plastic accumulating in the world’s five great ocean gyres may 100 times too high.

Writing in the Proceedings of the National Academy of Sciences last week, a Spanish-led research team says its nine-month sampling of seawater on a round-the-world research cruise in 2010-11 found floating plastic debris to be widespread: Of more than 3,000 samples collected, 88 percent contained bits of plastic.

However, the samples showed a strange dropoff at particle sizes smaller than 1 millimeter, suggesting that as solar radiation and weathering break the wastes into smaller and smaller pieces, some of it may simply disappear from the ocean surface.

Where it goes remains a mystery.

The team’s estimate of the current volume of plastic litter is on the order of 7,000 to 35,000 tons — less than 1 percent of what it calls a conservative estimate of the amount of plastic waste released into the ocean  in the last several decades.

Acknowledging the “complex task” of estimating the amount of plastic waste entering the ocean through stormwater runoff, deliberate dumping and other pathways, the paper notes that

Around 50% of the produced plastic is buoyant, and 60–64% of the terrestrial load of floating plastic to the sea is estimated to be exported from coastal to open-ocean waters.

Despite the possible inaccuracies of these numbers, a conservative first-order estimate of the floating plastic released into the open ocean from the 1970s (106 tons) is 100-fold larger than our estimate of the current load of plastic stored in the ocean.

As expected, the researchers found plastics accumulating within the five great gyres of the ocean, areas of rotating current that corral and concentrate the world’s flotsam and jetsam. But the amounts varied widely, with some samples capturing four times as much plastic debris as others. 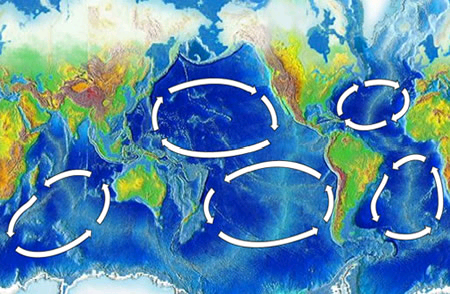 Concentrations varied, too, with the highest occurring in the north Pacific gyre. This is also the largest of the five, and it may hold about one-third of the global ocean’s total plastics load.

The team thinks the north Pacific situation could be “related to the high human population on the eastern coast of the Asian continent, the most densely populated coast in the world, with one-third of the global coastal population.”

The lowest concentration was in the Indian Ocean gyre.

The research group was led by Andres Cozar, an ecologist at the University of Cadiz in Spain. Its samples were collected from the research vessel Malaspina, named in honor of a Spanish scientific expedition of the late 18th century, in which two specially constructed frigates sailed the ocean from 1789 to 1794.

Despite centuries of inquiry, there are still vast gaps in our knowledge of the ocean; it is often said we know more about the moon, or even Mars, than about the seawater zones of our own planet.

The modern-day Malaspina‘s project offers a rather perfect illustration of this. While the general problem of plastics pollution is widely known — we’ve all seen pictures or heard descriptions of vast mats of floating trash in the gyres’ “convergence zones” — the new research represents the first rigorous attempt to actually measure the debris on a global scale.

And while it is widely known that plastic materials can be obnoxiously persistent in all environments — including seawater, which has a remarkable ability to break down and absorb all kinds of waste, including crude oil — that doesn’t mean the yoke from a six-pack of soda cans remains intact.

Plastics pollution found on the ocean surface is dominated by particles smaller than 1 cm in diameter, commonly referred to as microplastics.

Exposure of plastic objects on the surface waters to solar radiation results in their photodegradation, embrittlement, and fragmentation by wave action.

However, plastic fragments are considered to be quite stable and highly durable, potentially lasting hundreds to thousands of years. Persistent nano-particles may be generated during the weathering of plastic debris, although their abundance has not been quantified in ocean waters.

And this was puzzling, because our knowledge of plastics degradation suggests that “progressive fragmentation of the plastic objects into more and smaller pieces should lead to a gradual increase of fragments toward small sizes” and a steadier distribution across all sizes.

Where does it all go?

So where is all the microplastic going?

One possibility is that something accelerates sunlight’s degradation of microplastic fragments below 1 mm; another is that the finest bits of debris are washing ashore and remaining there. In the absence of any observations to support either pathway, the research team considers them unlikely.

The paper notes other research documenting the presence of plastics in the guts of fish — especially “mesopelagic” fish, feeding at depths of 200 to 1,000 meters, where the light isn’t so good — and also in the guts of birds and other predators that feed on fish (also, in their poop).

How harmful this is likely to be, the researchers don’t say. Plastic debris in larger sizes has been shown to kill fish and birds by creating blockages in their digestive systems, and some plastics are known to be manufactured with chemicals that could become toxic at certain concentrations.

But at least one oceanographer not involved with the study is taking a measured view for now. Angelicque White of Oregon State University told the Los Angeles Times that “microbes thrive on plastic; plastic is habitat; plastic is eaten by organisms.”

Much remains to be learned about all of these aspects, she said, and for the moment “it is not clear at all if this is always harmful.”

The full paper can be read here.

Good news, probably, on ocean plastic: A lot of it seems to be disappearing