A new survey of ecosystem health in the Rainy-Lake of the Woods Basin — that complex of northwoods watersheds which includes the Boundary Waters Canoe Area Wilderness and Voyageurs National Park — finds great leaps forward in scientific understanding of the region’s natural systems and their problems.

It finds some progress, too, on pollution control and other efforts at environmental restoration, among many continuing problems in the region’s much-loved and much-used lakes, streams and forests.

Key points from the International Joint Commission’s second “State of the Basin” report, released on Tuesday:

IJC is the joint U.S.-Canadian treaty organization created to help resolve disputes over waters on the international border, and also to advise governments on conserving water resources.

Its first state-of-the-basin report, issued in 2009 and sometimes known by the unlovely acronym SOBR, took a sobering look at deficits of scientific data in 12 critical areas of environmental knowledge, from sources of phosphorus pollution to trends in blue-green algal blooms to impacts of shoreline development and climate change.

Links between algae and climate

Four years later, the new SOBR reports significant research advances in all 12 areas, but lays special emphasis on current climate trends in the basin, the worsening situation of algal blooms in Lake of the Woods, and probable relationships between the two:

Some of the most pressing questions that remain to be answered are surrounding algal blooms, nutrient loads, contaminants, invading species and the effects of water levels and erosion …

[W]e can now use satellite images to track the spread and severity of algal blooms between years, we are close to determining the levels of phosphorus loading that would allow managers to correct impaired waters in the southern portion of Lake of The Woods.

Such correction is required under the Clean Water Act, given the Minnesota Pollution Control Agency’s placing of the lake’s American portion on its list of impaired waters in 2009. By law, the MPCA will have to develop a so-called TMDL program: determining first the total daily maximum load of phosphorus that the lake’s health can stand, then apportioning that load among the various contributing sources. 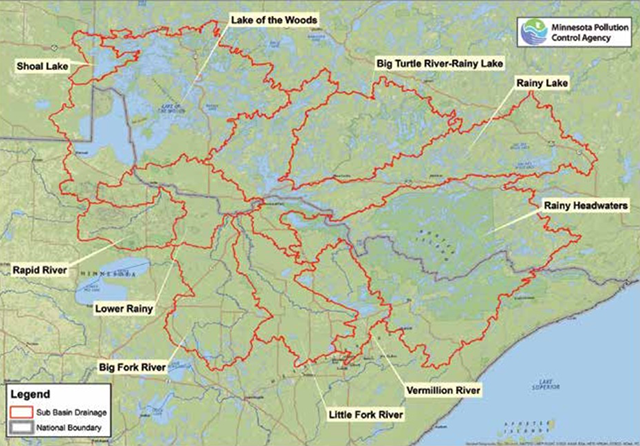 Courtesy of International Joint Commission
The Rainy-Lake of the Woods Basin, with ten sub-basins.

TMDL regulation is difficult in any circumstances, but the report suggests it may be particularly tricky in this case — not because two nations’ agencies are involved, but because a significant portion of the phosphorus influx appears to be from sediments already resting in the basin’s lake bottoms and streambeds, and thus beyond controls that have worked in the past.

Water quality in many of the rivers in the basin has improved substantially in the past several decades. This is especially prevalent in the Rainy River where many substantial improvements have occurred since the 1970s leading to water quality for many substances that is now within the limits prescribed by provincial and state agencies.

There is some evidence that the water quality in Lake of the Woods may be becoming more dilute (less elements and compounds in the water) as a result of improvements in their Rainy River but there is also evidence that we may paying for our past sins because phosphorus, that has long been stored in lake sediments as a result of high inputs from the Rainy River in the past, may still be playing a role by influencing the severity of modern-day algal blooms.

Old problems on a new scale

Some algal bloom in the basin’s lakes is a normal occurrence, and even large blooms are not new; the report notes that explorers, fur traders and other visitors to the basin had noteworthy encounters more than 200 years ago with the phytoplankton known as cyanobacteria.

These algae are often blue-green in appearance (hence the common name blue-green algae), though they can range in color from green to red. A very high concentration of cyanobacteria is called a bloom, and when algal cells rise to the water surface it is called a surface scum. Blooms often occur in still or slow-moving water during the warm summer months. 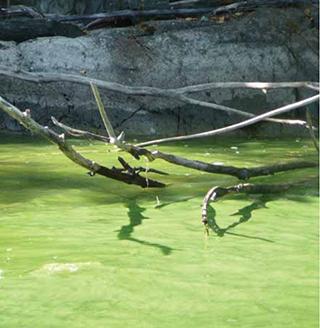 The blooms are smelly, ugly, fish-killing affairs, and they are not harmless to human lake visitors, either. The report notes that cyanobacteria produce liver and nerve toxins and that, “as a general rule,” it is advisable to avoiding body contact with lake water during the summer bloom periods.

And those periods seem to be lengthening. The report says anecdotal observations of larger and more frequent blooms appear to be supported by recent research findings indicating large blooms earlier in the summer season; over the last 10 years, Environment Canada has measured intense algal blooms and found “average monthly bloom extent across as much as 80% of the lake’s surface.”

The patterns also seem to track neatly with climate trends that are known to favor blue-green algae, including a shift to warmer and drier conditions, as reflected in the 28-day increase in the annual number of ice-free days on Lake of the Woods since the 1960s. (On the other hand, unusually heavy spring rainfalls, also on the rise, appear to temporarily suppress blooms.)

Current algal bloom research is describing a condition whereby blooms are increasing at the same time that nutrient loads have either not increased or have been substantially reduced, as is the case for the Rainy River loading of total phosphorus to Lake of the Woods.

These seemingly contradictory circumstances are the result of a complex process whereby climate change is influencing bloom intensity and where algae have access to additional nutrients from the lake sediments (internal loads) in some areas.

One way the climate trend can be tracked is with fossils — algae leave them, too — preserved in lake sediments and thus available for core sampling.

Cores obtained in Lake of the Woods’ Whitefish Bay show significant changes beginning in the 1850s, generally taken as the end of pre-industrial times, and accelerating markedly in the last 30 years in parallel with warming temperatures and a lengthening ice-free season. And it’s not just about the algae:

In addition, climate  change is expected to have a profound impact on habitat for coldwater fish, such as lake trout and cisco, in North American lakes. …

Land-based ecosystems are also predicted to change dramatically in response to changes in climate. Researchers have predicted sweeping changes in forest cover from boreal to temperate species together with large changes in the major types of animals on the landscape including shifts from moose to deer. Changes in the types of worms present in the soil will in turn affect the species of vegetation present.

These changes will produce novel ecosystems which may be different from anything that we are currently familiar with. It is simply impossible to predict changes to the basin that could have effects that are as consequential as these could be.

Two versions of the report — a 22-pager for the summary-minded, and a 228-page volume “written for a technical audience,” are available along with some descriptive materials at the IJC’s State of the Basin page.

Lake of the Woods algal blooms are worsening despite phosphorus cuts