Sallie and I signed up for our first share in a CSA farm this spring, putting some long-held principles into practice at last.

We wanted to invest in the earth-friendlier practices of community-supported agriculture. We longed to savor the hyper-fresh flavors in a steady stream of locally grown food.

And we wanted the special challenge, and rewards, of letting seasonal availability replace whim and grocery-store specials as the driver of our dinner menus.

At precisely the same time, however, and sort of by accident, I revived a long-dormant enthusiasm for growing my own food and planted a vegetable garden for the first time in probably 10 years.

Sallie had received each of these notions with full support, as a separate prospect. But in combination they raised some alarms along the lines of, “What on earth are we going to do with all those vegetables?”

It’s not that we don’t love our vegetables. We do, and are working steadily to shift more of our diet from animal products to plant-based foods, especially the green and leafy kind.

But we try hard to avoid wasting food at our house, considering it a moral failing if not a mortal sin to let a half-bag of fresh spinach go slimy at the back of the fridge.

So I took certain steps. I planned my own plantings to avoid duplicating our anticipated bounty from the growers at Big River Farms. I began collecting interesting-looking recipes for celeriac, parsnips, mustard greens and garlic scapes.

In readiness for glut

But even as I embraced the prospect of cooking creatively with whatever might be laid before us, week after week, I was also bracing for the moment of glut — the crisis they warn you about when you’re thinking about a CSA share, when broccoli or kohlrabi or some interesting but unfamiliar Asian vegetable arrives in a quantity that exceeds your culinary grasp.

Who knew the first such test would be posed by… iceberg lettuce?

But there it was, right on top of the box from Big River: a beautifully sprawling, 15-ounce head of the material that I’d stopped thinking of as food many decades ago, and quite possibly had never before purchased except on an errand for my mom.

I’d grown up on iceberg, of course, and reached college thinking that “salad” meant a platform of crisp and tasteless leaves topped with tomato wedges, cucumber slices, carrot shreds and goopy dressing.

Then came years of serial epiphany at the Tao Restaurant and other progressive eateries in Bloomington, Indiana, introductions to romaine and leaf lettuce and all the other varieties of lettuce and like greens that make a salad anything but iceberg.

If that sounds like foodie snobbery, so be it, but I’m in vast company. As Irene Sax wrote a while back in Saveur of the all-American vegetable she calls “The Ice Queen”:

It is safe to say that iceberg lettuce has a bad rap. Mild tasting, pale in color, and sold wrapped in cellophane emblazoned with corporate logos, it is the white bread of the produce aisle.

Criticized for being boring and bland, void of cachet, it has become something of a punch line, a metaphor for everything that was wrong about the way we used to eat.

To many food lovers, the film director John Waters’s quip that iceberg is “the polyester of lettuces” isn’t quite harsh enough.

Sax does not agree. After recounting her own journey through endive and arugula, mâche, frisée and other un-American lettuces requiring accent marks, she confesses that she still loves iceberg — “the crunch in my BLT, the base for my zesty chopped salad, and even the grace note in my fried rice.”

Yes, you can cook lettuce

And there she had me: You mean, you can actually cook the stuff?

You can indeed, and having tried her recommended recipe for stir-fried iceberg lettuce —adapted from Grace Young’s “The Wisdom of the Chinese Kitchen” — it will be a long time before I go looking for another method. Lettuce sufficient for eight or 10 forgettable salads became the base for four plates of memorably excellent, and unusual, stir fry.

The full recipe is here; for now, I’ll just say it consists of tearing the lettuce into large squares and stir-frying it with a little peanut oil, chopped scallions and sliced garlic (scapes, in our case) for about two minutes, adding a standard sauce of soy, sherry and sesame oil at the one-minute mark. 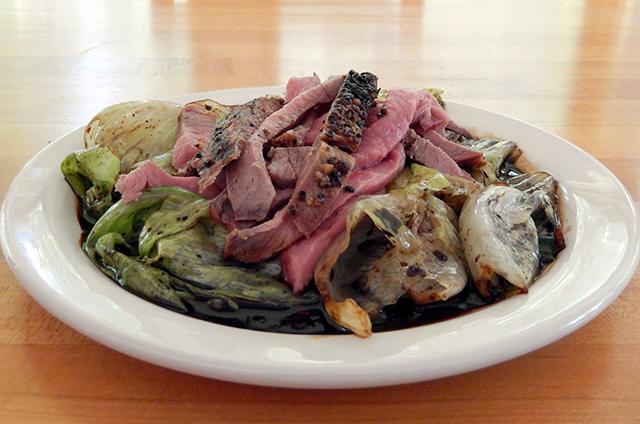 MinnPost photo by Ron Meador
You stir-fry it!

A first-grader could do this, and the result is a subtle, flavorful, silky-crispy cushion for pretty much any meat or vegetable or noodle you might like to lay on top. I’ve tried it with chicken chunks and steak strips from the grill, and liked them both a lot. (Next up, perhaps: squash blossoms in tempura batter.)

Sax reports that stir-fried iceberg lettuce is a popular dish when Chinese celebrate their New Year. And though it is a completely American invention — developed in 1894 by the Burpee seed company of Philadelphia —  it is far more popular, these days, almost everywhere else:

At the same time that iceberg lettuce was losing its cachet in the United States, however, it was gaining in popularity around the world — both because it was considered chicly American and also because it was a profitable crop. In Mexico, where farmers began growing iceberg in the 1980s, the lettuce is used as a sweeter substitute for cabbage. …

In Scandinavia and in northwestern Europe, starting in the late 1970s, farmers began to grow varieties of iceberg; today the lettuce still often fetches higher prices than do other types in those parts of Europe. In Spain, France, and Italy, iceberg is raised for export. In Israel, the Middle East, Great Britain, and Australia, it’s an important domestic crop and a common salad lettuce and garnish.

But nowhere outside the United States has iceberg taken a firmer hold than in Asia. In China, the world’s largest producer of lettuce in the world, cooks cherish iceberg’s resilient texture and add it to warm dishes like congee soups and fried rice. In Japan, locally grown iceberg has become a staple of the simply dressed salads that are often eaten for breakfast or as a refreshing side dish.

So iceberg lettuce will be going on the grocery list,  I guess. But not right way — we’re moving into an abundance of heirloom lettuces, arugula, chard, and other leafy greens right now, thanks both to Big River Farms and also to my own plantings in a couple of EarthBoxes and eight hot-composted straw bales.

But that’s a story for another day.

Lettuce From Skunk Hollow: Savoring CSA and homegrown bounty (who knew iceberg could be so delicious?)