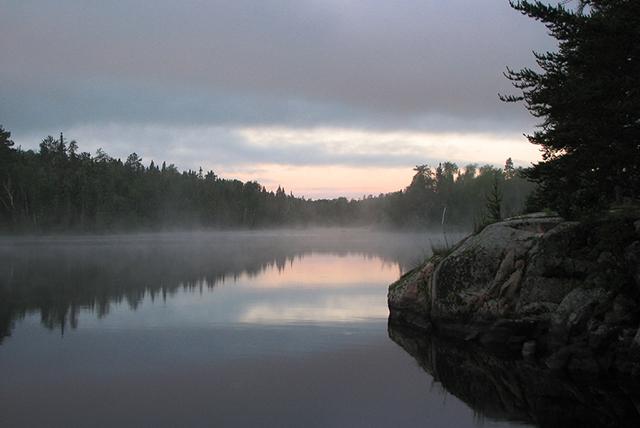 CC/Flickr/Observe The Banana
Chile’s Antofagasta seems to be cooling to the prospect of mining on the edge of the Boundary Waters.

Last week we all got our first look at official projections of how the Twin Metals Minnesota copper/nickel mine at the edge of the Boundary Waters might proceed, and the numbers were frankly impressive:

All in all, “one of the most compelling greenfield copper-nickel development projects in the world,” poised to be “one of the world’s great 21st century mines” — fortuitously situated to take advantage of low production costs, a ready work force with mining experience to fill an anticipated 850 jobs, and access to Great Lakes shipping. All in “a state that supports the mining industry.”

Those are the words of Kelly Osborne, CEO of Duluth Metals, the Canadian company that owns a majority of Twin Metals Minnesota, and you might think they would be music to investors’ ears.

Especially since this time they accompanied release of a securities-trading document, known as a pre-feasibility study, prepared by independent analysts under contract to Duluth Metals and filed with Canadian regulators.

As reported by Minnesota Public Radio’s Dan Kraker, who had the best of fairly cursory coverage locally,

Duluth Metals’ stock price tumbled 23 percent to $.33 a share by the end of trading Wednesday [the day of the announcement]. During a conference call to announce the report, investors appeared to have some concerns over the company’ s ability to raise the capital needed to finance the project. They also raised questions about Antofagasta’ s decision last month not to increase its ownership stake in Twin Metals.

That sent me looking to mining and investment publications for further perspective and boy, did I find some.

The Northern Miner, published from Toronto, reported that “Wednesday’s tumble of 11 cents, to 31 cents a share, took it to a new 52-week low, far below its high-water mark of $1.46 for the previous 12 months.”

(The discrepancy with MPR’s figures reflects the fact that Duluth Metals is traded on both American and Canadian exchanges; I checked both the Toronto Stock Exchange and NASDAQ on Monday and found that Duluth Metals’ shares had fallen a few cents further still.)

The Northern Miner appraises the TMM project’s overall, lifetime economic profile as “positive, if not particularly robust.” And it had the clearest analysis I’ve seen yet of how the TMM project may be affected in the fairly short term by cooling enthusiasm at Antofagasta, the Chilean conglomerate with interests in some of the mines that make Chile the world’s largest copper producer by far.

TMM is a joint venture of Antofagasta and Duluth Metals, and in early July, when Antofagasta had an option to increase its ownership share from 40 percent to 65 percent, it took a pass. After describing the executive reshuffling that ensued, The Northern Miner looks to a future that seems just a mite cloudier than last week’s projections from Duluth Metals:

Duluth now has six months to exercise an option to buy Antofagasta’s interest by paying back the company’s sunk costs, estimated at US$220 million, as well as a US$10 million bridge loan advanced by the major.

If it chooses not to buy Antofagasta’s stake, Duluth will still have to pay back the bridge loan, plus accrued and unpaid interest, in either cash or shares. Duluth has hired financial advisor Barclays to help it conduct a strategic review of its options.

All of which may have something to do with why last week’s draft of the pre-feasibility study for the TMM project, initially promised for June or July release — accounts varied on the date — was a bit late in coming. (The full document is due within 45 days of last week’s announcement.)

Where to park the tailings

I looked in vain for a reference in Duluth Metals’ release as to the estimated volume of crushed-rock tailings that will have to be contained during the mine’s operation — with peak operations handling 50,000 tons of rock per day, 18.3 million tons per year — and stored more or less permanently after the mine closes.

However, I did see a clearer statement than I’d detected previously on where the waste will end up: About half will be put back into the underground mine, the other half  held in a “surface facility” southwest of Babbitt. The mine and other operations, of course, remain in the BWCA watershed, near the South Kawishiwi River.

This puts the tailings pond and its long-term potential to create acid drainage across the Laurentian Divide and into the watershed of the St. Louis River, draining toward Lake Superior, not the watershed containing the Boundary Waters Canoe Area Wilderness and Voyageurs National Park.

This will not mollify most who oppose precious-metals mining in the north woods on environmental grounds, but it could lower the regulatory thresholds awaiting Twin Metals’ actual operating plan, which is still probably at least  two years out.

Especially if the NorthMet project proposed by PolyMet Mining Corp. for the Babbitt area — much smaller in scale, lifespan, employment potential and other respects, and much further ahead in the environmental review and permitting process — manages to secure regulatory approvals first.

Despite Duluth Metals’ assessment of Minnesota as mining-friendly, the regulatory road the TMM project will have to travel is considered “difficult” by the writers at Seeking Alpha, a crowd-sourced publisher that covers financial markets from the “buy side” of investors and industry experts rather than analysts working on the “sell side.”

Not because of vigorous regulation, mind you, but because of potent challengers and unpredictable politics. Earlier this month, Seeking Alpha suggested that investors “should prepare for a prolonged process” if the TMM project reaches the permitting stage, because

Numerous NGOs are fighting the project predominantly on environmental grounds, and local politics are split on the project as well. So much so that Minnesota Democrats decided against debating the support of non-ferrous mining development in Minnesota at the state party political platform to avoid acrimonious confrontation … .

But finances were a more immediate concern. Finding a replacement partner for Antofagasta “will be no easy task,” Seeking Alpha suggests, because “capital-intensive large bulk mining projects have fallen out of favor in recent times, and several other comparable projects have also come on the market.”

(Indeed, according to a report at mining.com on Antofagasta’s annual shareholder meeting in May, the Chilean conglomerate is among the world’s mining companies that have decided on a consolidation strategy of getting more copper out of existing “brownfield” mines and less from new, “greenfield” operations like the TMM project, because of lower capital costs. A full text of the Antofagasta’s chairman’s remarks, including his expectation that the TMM project couldn’t clear regulatory hurdles before the end of the decade, is available from the London Stock Exchange.)

Therefore, opines Seeking Alpha, “Duluth Metals does not seem to be in a strong position to negotiate a way out of the current situation.”

It won’t be long before we can see if they’re right.