If I had a dollar for every mile of the North Shore that I’ve driven or hiked over the last 30-plus years, I might buy a few acres near the Temperance River and build my own Glensheen.

Until last weekend, though, I’d seen precious little of Minnesota’s much-loved coastline from the water, as opposed to a road or footpath.

It happened sort of by whim, as three realizations converged: The weather forecast for the Twin Cities was for beastly heat; the count of weekends available for our annual kayaking journey to the Apostle Islands was growing short; but we didn’t want to go through the thrash of assembling gear and provisions for a multiday stay on the water.

So Sallie and I threw our kayaks atop the car, packed the minimal necessities for day paddling, and headed for Tofte.

Also, as it turned out, for the Lake Superior State Water Trail. Going through our file of outdoor travel maps, Sallie had found a pocket-size guide that one of must have picked up nearly two decades ago, when the trail was still in pilot project stage for the Minnesota Department of Natural Resources.

Copyrighted in 1996, it shows only a few miles of designated landing sites, landmarks and lakeshore mileposts in the Gooseberry Falls region. But it hints at a grander ambition: a kayaker’s resource stretching more than 150 miles from Duluth to the Canadian border, with some three dozen available campsites and nearly 80 safe-landing spots organized and annotated for safety and convenience.

Today the trail is a reality whose four-part guide can be downloaded as PDFs and then folded for the pocket of your PFD.

Having looked over the wealth of opportunities, we decided to make our first launch from the DNR’s small-craft harbor and storm refuge at Taconite Harbor, in the shadow of an old pellet- loading dock and power plant.

This system of sheltered anchorages is another great idea, and convenience, for waterborne travelers on the North Shore, and though it’s really meant for sailboats and powerboats, you couldn’t ask for an easier place to park, prepare and launch a kayak, or a less crowded one.

It was late on a Friday morning and a few fishermen were coming in from the lake, reporting light breezes, little wave action and — like most days, apparently — no kayakers. One told me that he hardly ever sees a paddler on the lake, except for groups going out in rental boats from resorts and outfitters along the shore.

We paddled into the outer harbor, vacant but for a single fishing boat tied up on the outer breakwater. Opting for a view of the far horizon over one of industrial infrastructure, we backtracked very slightly toward Duluth to get into the open lake. 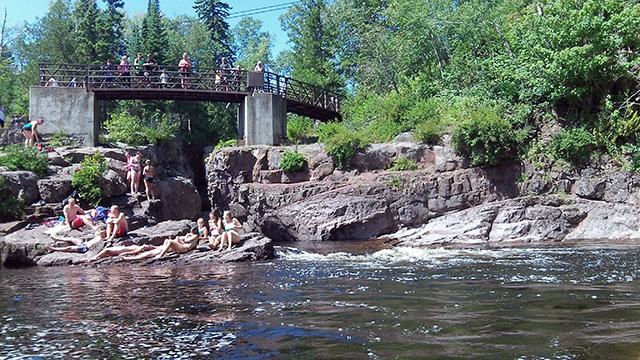 MinnPost photo by Ron Meador
Swimmers at the mouth of the Temperance River.

Instantly we felt the long, slow swells that serve to announce your arrival on the big water. Ahead and to either side, for a full 180 degrees or more, was the unbroken line where lake meets sky.

As we turned toward Grand Marais and settled into the rhythm of light, choppy waves delivered by the easterly breeze, a good-sized salmon or lake trout leaped out of the lake just off my bow, and it occurred to me that we were about to enjoy a fish-eye view of the North Shore.

One obvious difference in seeing this coast from the water instead of the road is that you get to look at a lot more settlement, which typically is screened from Hwy. 61 by aspens and spruce.

I don’t mind this a bit — it’s interesting to look at the houses people have built along the lake and to imagine what their lives might be like. Several within the first mile of Tac Harbor had stairs leading down to exactly the sort of small cove and gravel beach that avid kayakers would love to have at their disposal.

The wind lessened after a bit and we found ourselves in calm water with clear views of boulders on the bottom, 20 or 30 feet down. A clump of four young mergansers floated out from behind a rock, spotted us and paddled away with that comical, waddling-on-the-water wiggling of their butts. There were cormorants and just one bald eagle.

Before long we came to the landmark I most wanted to see on this stretch of shore  — the granite cross erected as a monument to Father Frederic Baraga and his safe though unplanned crossing of the lake from the Apostles to the mouth of the Cross River in 1846, supposedly some 70 miles. In a storm. In an open canoe.

It’s a well-marked spot on the driving maps of the North Shore, and I’ve walked to it more than once, but I wondered if it wouldn’t be more impressive if approached from the water, as the priest had done, even on a calm day in a well-provisioned, watertight kayak. And it was.

As we bobbed offshore, taking pictures, I saw two couples walk out to the point where Baraga’s marker stands, study the plaque, peer at the two of us, shake their heads and return to the parking lot.

Further up the shore we came to the mouth of the Temperance River, which was running higher and faster than I’d ever seen it, and it was a special delight to paddle upstream past the spots where I’d so often stood to fish or make photographs or beachcomb with my little boy in years past.

But it was a noisy, boisterous place this day, with scores of swimmers scattered in the water or along the shoreline rocks where river and lake came together, savoring the coincidence of a hot summer day and a wee bit of Lake Superior made swimmably warm by the river’s contribution. 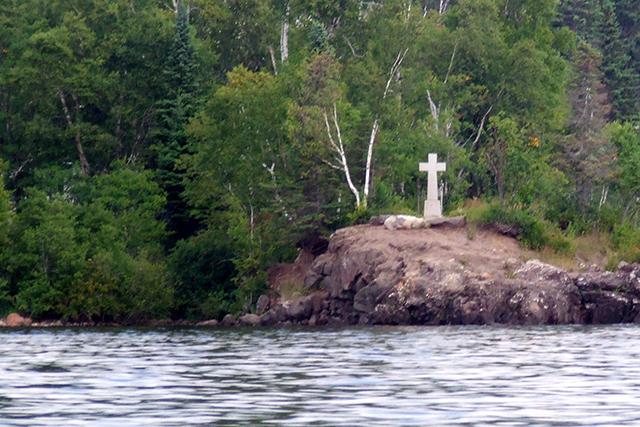 MinnPost photo by Ron Meador
Father Baraga’s Cross, a granite monument at the Cross River where the priest found shelter from a storm that had blown his canoe across Lake Superior from the Apostle Islands on a summer day in 1846.

A little solitude here would have been nice, but I was also pleased to note — as I so often do in our state parks these days — the joyful Spanish, and Slavic, and other not-English jabbering of folks from faraway places. Their love for these natural places is so plain, and so essential to maintaining a constituency for their preservation after my generation is gone.

The winds pick up

Heading on up the shore, emptier and less settled now, we coasted along stretches of steeper,  rockier shoreline, paused for lunch, then started back toward Taconite Harbor, planning to pass our launch point and mosey down to Sugarloaf Cove and a beach our fisherman friend of the morning had praised as a fine source of collectible agate.

But now the winds had picked up and the paddling was no longer lazy. The winds were still abeam but a little more behind us now, quartering, shoving our near-empty boats around in a way we’d quite forgotten about in our years of paddling them jam-packed and heavy.

It wasn’t scary by any means, but the lake held our attention and gave us an unexpected workout as we returned to the big breakwater, this time entering at the upshore end. No sooner were we inside than a 30-foot sailboat churned in behind us, dropping sail and dieseling for a mooring buoy.

We stayed in the outer harbor for a while, enjoying the return of calm water, poking around the natural islands and manmade rockpiles that formed our shelter, having a second look at the ore-loading facility and power plant that, truth to tell,  I also found scenic in their own way.

It was but a half-hour’s work to land, unpack, load the boats and go for hot coffee at the cafe in Schroeder, and maybe 10  minutes more back to our lodgings in Tofte for a shower and a good restaurant meal, closing out a fairly perfect impromptu day on the planet’s largest freshwater lake.

Saturday and Sunday were windier and/or wetter than we like for day paddling, so we hiked instead and without regret — knowing we can come back for daily dips along the water trail whenever and wherever we choose.

Going out onto Lake Superior without proper equipment and preparation is not a good idea; if you want to try the water trail, be sure you’re ready to do so. The DNR’s advice is a good starting point, especially the parts about having good PFDs, traveling in groups, dressing for immersion in seriously cold water, and knowing what to do in an unexepected out-of-boat experience.