At best, nuclear power accounted for only 10.8 percent of the world’s electricity last year — down from a peak of 17.6 percent in 1996 — and faces a difficult future in at least the short term because the world’s reactor fleet is aging, while new projects are burdened by high costs and construction delays.

So says last week’s World Nuclear Industry Status Report 2014, which so far is getting more attention in business and power-industry publications than in general media.

The report’s chief author is Mycle Schneider, an analyst who has also been an activist on matters of nuclear energy and proliferation (opposing both) and who sees no conflict when scientists also engage on issues as citizens.

This year’s report, part of an annual series, was underwritten in part by the Rocky Mountain Institute of Snowmass, Colorado — known for its well-researched, science- and economics-based advocacy of renewable energy systems — and the German Green Party.

Schneider’s credentials and sponsorships may be cause enough for some to dismiss his conclusions out of hand. But I think it’s interesting to note  that his consulting clients have included the International Atomic Energy Agency, the French and German environment ministries, the Belgian energy ministry and members of the European Parliament.

The IAEA has distributed his reports in the past; some have been reprinted in the Bulletin of the Atomic Scientists. This year’s report has gained attention from U.S. News & World Report, hardly a journal for lefty, anti-nuke bunny-huggers, as well as Power, concerned with “business and technology for the global generation industry.”

And Power’s take on the Schneider analysis, by the way, is that the true decline is even steeper than stated above. It leads with statistics putting nuclear’s share of “global commercial primary energy production” — which does sound like the thing you’d really want to measure — at 4.4 percent last year, “a level not seen since 1984.”

Count mothballed plants, or not?

Power takes issue, however, with Schneider’s most interesting, and perhaps most controversial finding, that “the 388 operating reactors worldwide are 50 fewer than the peak achieved in 2002. The number is misleading, though, because much of the reduction is due to Japan’s nuclear program being in a state of ‘long-term outage’ (LTO) since the Fukushima disaster.”

Other points that Power’s Aaron Larson felt were worth noting but not challenging (lightly compressed):

From a separate piece in Power, I learned how the Japanese are making up for lost fission: a little more oil, a lot more coal and liquefied natural gas; nuclear’s share has fallen from 50 percent to 1 percent and renewables have actually gone down, from 20 percent to 9. But in other countries, or “wind and solar seem to be winning the battle [with nuclear] for new capacity.”

In 2013 alone, 37 gigawatts of solar and 32 GW of wind capacity were added throughout the world. In contrast, nuclear capacity has declined by 19 GW since 2000. Again, much of that decrease is due to Japanese reactors being placed in LTO, but even with those reactors considered operational, nuclear capacity would only have increased 17.5 GW during the 14-year period. 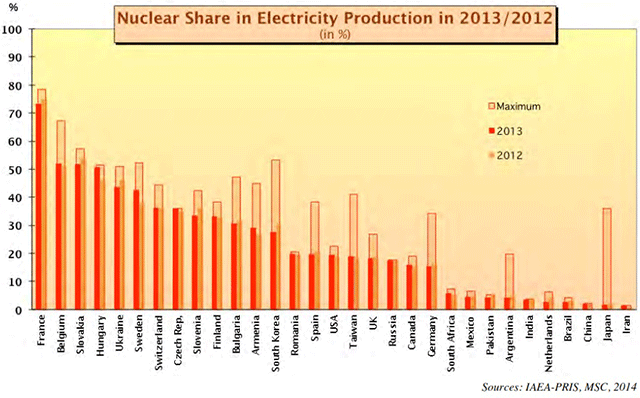 World Nuclear Industry Status Report 2014
Nuclear power’s share of electric-power generation has fallen from peak levels in nearly every nation of the world, according to 2013 and historic data assembled by the International Atomic Energy Agency.

The reasoning on long outages

Now, let’s have a look at Schneider’s reasoning on long-term outages — not just in Japan, by the way, but worldwide, as an indisputably aging fleet increasingly encounters protracted down time.

The world’s nuclear statistics are distorted by an anomaly whose cause is not technical but political. … With the exception of the six units at Fukushima Daiichi, the entire Japanese reactor fleet of 48 units is considered operating. The International Atomic Energy Agency (IAEA) classifies all of these Japanese reactors as “in operation”—11 percent of what the IAEA considers the world nuclear fleet—despite the fact that none of them have generated power since September 2013, only two produced electricity in 2013 and just ten in 2012.

The average outage of these Japanese “operational” units is over three years, as this report documents. In fact, three units have not generated power for the past seven years. To find a more appropriate way to deal with this situation, the World Nuclear Industry Status Report 2014 proposes a new category called Long-Term Outage (LTO).

Taking into account reactors in LTO, the number of operational reactors in the world drops by 39 (9 percent) from 427 in July 2013 to 388 in July 2014—50 fewer than at the peak in 2002— and brings world nuclear statistics into closer alignment with reality.

It is time to match the international nuclear statistics to the industrial reality. The introduction of the new category Long-Term Outage more appropriately represents the operational status of nuclear power plants and provides industry analysts, political decision-makers and investors with a tool that mirrors empirical facts rather than wishful thinking.

To qualify as a long-term outage by Schneider’s definition, a reactor must have not generated any power in the previous calendar year or first quarter of the current calendar year — that is, 15 months. And besides the many mothballed Japanese reactors, which any fair-minded observer must consider at high risk of staying mothballed in Japan’s current state of nuclear dismay, only two others worldwide are on the LTO list, one in South Korea and one in India.

Neither U.S. News nor Power sought industry comment on the Schneider analysis but — interestingly — Climate Central’s blogger Bobby McGill did, and neither spokesman he interviewed actually took issue with Schneider’s methods or measures, including LTO. They just prefer different, more nuke-favorable ones:

David Hess, an analyst with the London-based World Nuclear Association, a lobbying group, told Climate Central that he expects nuclear power to grow in Asia in the coming years, primarily in China, India, Russia and South Korea. Nuclear power is essential if the world wants to get serious about addressing climate change and reducing carbon dioxide emissions, Hess said.

Thomas Kauffman, spokesman for the Nuclear Energy Institute, an industry lobbying group, in Washington, D.C., said more nuclear reactors are under construction today than at any point since 1989, including five in the U.S., while U.S. nuclear power production has increased this year.

“Does that sound like an industry in decline?” Kauffman told Climate Central. “Of the 30 countries that already use nuclear power, all but a handful are either building new reactors or planning to build new ones. We encourage Mr. Schneider to continue his tally in the years to come, so he can document the world’s increased use of energy to generate reliable, affordable, carbon-free electricity.”

An executive summary of the report, with links to a downloadable PDF of all 159 pages, can be found here.