A new report on frac-sand mining suggests that Americans living near desirable silica deposits should brace themselves for a long and lasting boom — not just in Wisconsin and Minnesota, where the bulk of the mining has occurred so far and is likely to keep expanding, but in more than a dozen other states stretching as far to the north and east as Maine.

“Communities at Risk: Frac Sand Mining in the Upper Midwest” is not a neutral assessment by any means. It was prepared by the Civil Society Institute in partnership with the Environmental Working Group; both groups advocate for policies that would shift U.S. energy systems away from oil, natural gas and coal as a necessary response to global warming.

But this survey of the current frac-sand landscape is based on respectable research, much of it from sources without advocacy involvement  and some of it, in fact, from industry groups, business publications and government agencies on the order of the Wisconsin and Minnesota departments of natural resources.

Since its release last week, the report has earned significant coverage in the Los Angeles Times and International Business Times, as well as industry publications, but nary a mention that I could detect in Twin Cities media.

So let’s have a look at some sections that perhaps should concern everyone who stands to be affected by this burgeoning extraction industry, no matter how they might feel about fracking itself.

Over the last year there has been much discussion in Minnesota about the likelihood of a continuing slowdown in production of frac sand from deposits that lie along the Mississippi and Minnesota rivers, in particular, because of slack demand, shifts to other sands (and potentially manmade substitutes) and other factors.

However, as the Wall Street Journal reported in early August, fracking operations now “are expected to use nearly 95 billion pounds of sand this year, up nearly 30% from 2013 and up 50% from forecasts made by energy-consulting firm PacWest Consulting Partners a year ago.”

That article, which is cited but not quoted at any length in the report, explains that zooming demand is a consequence not just of more fracking wells, but also of methods that require more sand per well:

It can take four million pounds of sand to frack a single well, but several companies are experimenting with using more. Companies like Pioneer Natural Resources Inc. … are finding that the output of wells is up to 30% higher when they’re blasted with more sand. About a fifth of onshore wells are now being fracked with extra sand, but the technique could expand to 80% of all shale wells, according to energy analysts at RBC Capital Markets.

Based on the location of sand deposits containing the right kind of silica sand for fracking, the report maps possible future sites for expanded mining in Minnesota and Wisconsin as well as Iowa, Illinois, Missouri and Michigan, where some mining has occurred, as well as potentially exploitable deposits in many states that don’t yet have sand mining: Maine, Massachusetts, New York, North Carolina, South Carolina, Pennsylvania, Tennessee, Vermont and Virginia.

Prices are up, too, and if certain lower-quality sands prove useful for fracking, the report says, additional deposits could be mined in South Dakota, Texas and Arkansas. 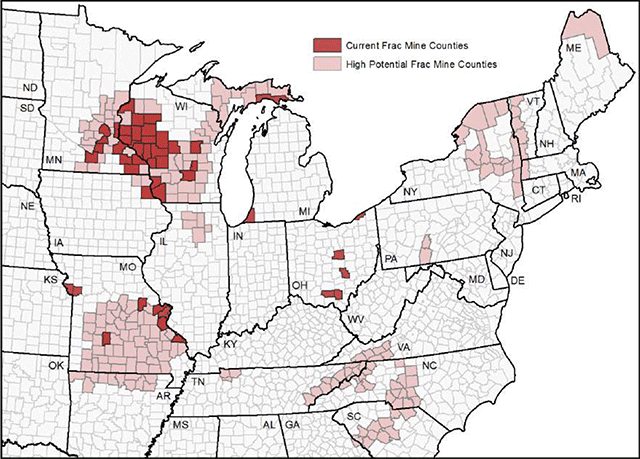 Looking beyond the dust

I think for today we’ll just lay aside the public-health issues associated with dust that accompanies sand mining and processing  — except to say that they are both serious and unresolved, with studies of exposure in mining zones just getting started  — so we can turn to impacts that have received less public discussion.

Land reclamation after mining ceases — a key concern in the bluff country of southeastern Minnesota, especially — remains a major question mark, simply because so little has yet been done:

Most frac sand mine locations are mined in phases, and thus the reclamation phase is done in phases.  Occasionally the process is only an effort to stabilize the land and minimally revegetate.

Of note, while the reclamation process is mandated by state and local regulations, long-term studies have not been completed to determine the viability of the reclaimed land.  To this end, a $232,000 study is being initiated with Chippewa County (Wisconsin) public officials, the University of Wisconsin at River Falls and a few mining companies as participants.  Unfortunately, the study is currently at its inception and will not be completed until 2019. …

Because frac-sand mining “changes the landscape indefinitely,” and on a far larger scale than sand and gravel mines of the past, the report says, “To many, frac sand mining is the Upper Midwest’s version of mountaintop removal.”

Existing local businesses (including farmers and those dependent on tourism) feel threatened by the arrival of the frac sand industry in their communities. These concerns are not baseless.

Frac sand operations concentrated in southwest Wisconsin and southeast Minnesota are located in what is known as the Driftless Area.  It comprises 23,000 square miles and is known for its sandstone bluffs and tourism.  It has attracted significant federal and state dollars for the restoration of streams and possesses a large number of unique and threatened species.  It contains many protected areas.  For many, the frac sand industry represents a threat to the existing economy and quality of life in the region.

Water quantity issues get as much attention as water quality issues in the report, which relies on materials from the Wisconsin DNR as support for this passage, which I have lightly compressed:

For frac sand mine operations, water is typically withdrawn from an on-site well.  The placement of the well at the mine site, along with construction, local geology, and nearby surface waters, all have a distinct impact on the movement and quality of the groundwater.

Pumping from any given well may cause a ‘cone of depression’ to form, lowering the groundwater level in that area.  If poorly managed it can ultimately cause a reversal on the flow of the groundwater. The total amount of water withdrawn and/or consumed by each operation varies, and much of the variation depends on whether the site employs an open or closed loop process.

In terms of water volume, site withdrawals can range from 420,000 gallons per day to 2 million gallons per day. According to the 2013 Wisconsin Water Withdrawal Report, a voluntary survey administered by the state’s DNR, 30 sites in 10 counties reported using more than 1.3 billion gallons of water for “industrial sand preparations,” more commonly known as washing frac sand, down 144 million from 2012 and up 101 million from 2011.

In the 10 counties with reported frac sand water operations, industrial sand preparation was the 6th highest user of water with 93% coming primarily from groundwater and the rest from the surface. In 2013, 18 operators consumed more water for frac sand preparation than 67 of the 70 “Public/Municipal/Community” water systems for all 10 counties.

As for regulatory responses, the report assesses efforts so far in both Minnesota and Wisconsin as lax — a patchwork of inconsistent, highly local and often weak responses by officials who concede they are routinely overmatched, outspent and bullied by the companies they are supposed to regulate. On Wisconsin, the report says:

Similar to other forms of development, frac sand mining has contributed to social conflict. The prospects for economic development, jobs, and profit pit neighbor against neighbor and elected officials against their constituents.

Pushback began to occur and citizens began to influence local decision-making in a number of respects. Some counties began to impose moratoria on further development to study the situation. Other units of local government began to exercise their police powers to impose restrictions on frac sand operations or in attempts to stop expansion altogether.

The industry response has been to file suit, to undermine local jurisdictions through legislative fiat or to avoid barriers to expansion by shifting local jurisdiction by means of annexation  — all of which have implications for local strategies to meet the challenges of frac sand operations.

Compared to that, the report’s authors find the situation in Minnesota a bit better:

The government in Minnesota has exhibited much more caution about allowing the frac sand industry to gain a foothold in the state than in Wisconsin. … There also appears to be much more cooperation between state and local government on the issue.

The state’s Environmental Quality Board recognizes the importance of local planning, zoning and land use authority as pivotal in protecting the unique Driftless Area in Minnesota, characterized by bluffs (home to much of the frac sand), trout streams, many protected species, and groundwater essential to tourism, economic development in general, and sustaining the quality of the streams. …

In addition, the Minnesota legislature passed legislation that directed the state’s EQB to publish a guidance document for local government of what to regulate and how, from an environmental, water quantity, and public health perspective. The Minnesota Pollution Control Agency is developing air standards for the silica dust threat to local populations.

But that doesn’t mean our problems are behind us. Many more impacts, from wear and tear on local roads to the prospects of acid drainage from sand mines, are also discussed in the report, whose full text is available here.