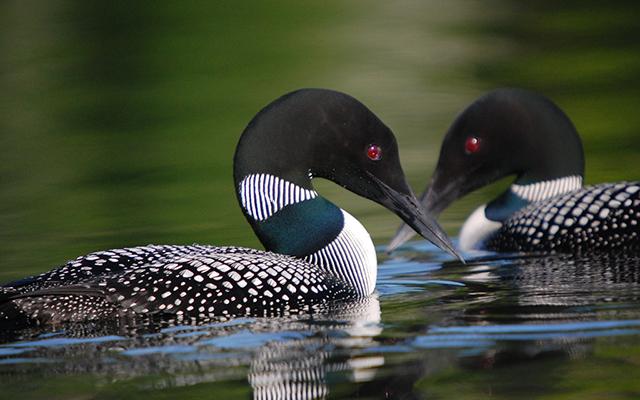 USFWS photo by Gary J. Wege
Among the likely and much-reported examples of how these shifts might play out: a Minnesota without loons, a Baltimore without orioles.

This has been a bad-news week for American birders; also for non-birders who grasp that broad threats to our planet’s feathered species must also imperil the health of all the others.

The first of two discouraging reports came from the National Audubon Society. It has been widely reported as predicting that as a consequence of habitat shifts driven by climate change, half of North American bird species are likely to be homeless within this century.

Actually, that would be an optimistic reading of the main findings in “Birds and Climate Change,” a rigorous seven-year effort to overlay climate predictions of the Intergovernmental Panel on Climate Change on the remarkable data sets generated by a decades of citizen bird counts.

Because of Audubon’s Christmas Bird Count, begun in 1900, and the North American Breeding Bird Survey begun with U.S. and Canadian government sponsorship in 1966, we know a lot more about birds — their numbers, habitat needs, natural ranges, migration patterns — than most other animals.

Thus, it is possible for Audubon’s scientists to look with considerable confidence at the current range of some 588 selected species, and at where the comparably suitable range will be in, say, 2050 and 2080, and compare the overlap.

About one-fifth of the bird species studied  — 126 — will lose at least half their current habitat by 2050 without an ability to regain it elsewhere, the scientists found. Another 314 species, not quite one-third of those studied, will experience that level of loss by 2080.

For 28 species, habitat loss to climate change would be effectively 100 percent.

(It is hard to find a definitive number for bird species of North America above the Mexico border, which is Audubon’s study area; the American Birding Association puts it at 984, other sources put it closer to 800.)

Among the likely and much-reported examples of how these shifts might play out: a Minnesota without loons, a Baltimore without orioles. Potential habitat reductions of 99 percent for trumpeter swans and northern saw-whet owls. Bald eagles reduced to just 25 percent of their current range, potentially reversing their recovery over the last half-century.

Audubon’s scientists and executives have been cautious in discussing the prospects for actual extinction of bird species, because of limitations in their study method, or current ornithological knowledge, or both. These are significant and for the most part not encouraging:

If not, I think most of us understand, that raises serious questions about the health of ecosystems where birds no longer fulfill their functions of pollination, seed distribution, pest control … .

Western North Dakota is famous for its birds. The land here is checkered with neat squares of farm fields and native prairie overlying a scatter of pothole lakes, their curving shorelines shaped tens of thousands of years ago by chunks of melting glaciers. This rich landscape provides critical breeding grounds for millions of birds, from the Mallards and Blue-winged Teal that pour out of the so-called “duck factory” to the Bobolinks of the tallgrass prairie.

But the region is changing fast. Even as birds continue to flock here every summer, expanding agriculture has eaten away at their habitat, and since 2008 the area has witnessed an energy boom of global proportions. Today the fields, prairies, and badlands are punctuated with hundreds of rectangles of raw, orange dirt, each studded with its own set of trailers, storage tanks, and nodding pumpjacks.

Every day, companies use hydraulic fracturing to extract nearly a million barrels of oil from the Bakken formation, a layer of shale that lies about two miles beneath the prairie. Roughly 8,000 wells are operating already, and an additional 40,000 could be drilled and fracked in the next 20 to 30 years. In line at one brand-new convenience store, a woman carrying a hardhat sums up the prevailing attitude: “Patience are for doctors.” In the Bakken, the time is now, and the future is a long way off.

Yet the Audubon Report, a groundbreaking new study by Audubon scientists, suggests that this place will become even more important for birds as the planet warms. For the 26 grassland bird species whose breeding ranges are projected to decrease dramatically by 2050, North Dakota will become an increasingly rare island of viable habitat and suitable climate conditions, one of their few remaining refuges. Protecting a portion of the region for birds could mean the difference between survival and extinction for some species.

But it surely won’t be easy. Although conservation measures have achieved remarkable successes in protecting birds over the last 100 years especially, the pressures to develop natural habitat for other purposes — energy production, agriculture, industry, commercial space, houses — only continues to mount.

A holistic look at those factors is a hallmark of the week’s second bad-news report,  “State of the Birds 2014,” fifth in an annual series produced by 23 government, conservation, hunting and advocacy groups (including Audubon).

Where Audubon looks from particular species to their habitat, SOTB 2014 looks to seven distinct types of habitat — wetlands, aridlands, grasslands, forests (sometimes split into eastern and western forests), coasts, islands and ocean — and surveys population trends for the bird species dependent on each.

Less information is available for the ocean and island categories, but except for wetlands, the others have recorded steady declines for the past 40 years.

And while the report cites many examples of conservation initiatives that have proved effective, its “watch list” of the birds considered at highest risk of extinction continues to grow.

This year it runs to some 233 species, only about one-third of which are receiving special federal protections under the Endangered Species Act. Among Hawaiian birds — excluded from the Audubon study — every forest-dependent species is on the list.

The SOTB 2014 watch list can be downloaded here; the full report is available in PDF format here.

At this writing, the full Audubon study is not available for download; the organization says it has been submitted for peer review and potential journal publication. In addition to the portal link above, Audubon has prepared an interactive map to let you look up birds by species or region; its page for species of the Mississippi Flyway, including Minnesota, is here.