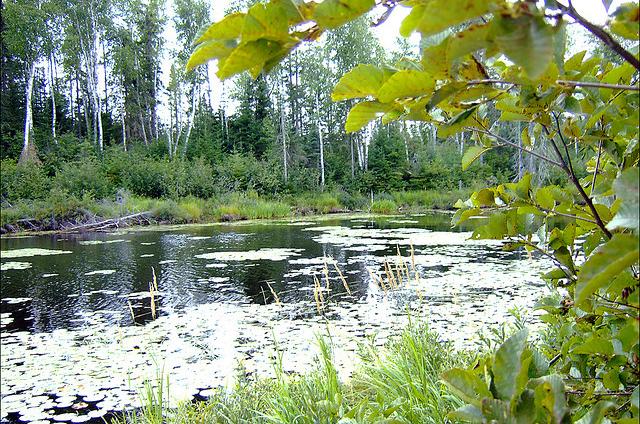 CC/Flickr/Joel Dinda
The Wilderness Act “provides a legal definition of wilderness, as land that’s ‘untrammeled by man’ with a ‘primeval character and influence.’ ”

A wilderness is an area where the earth and its community of life are untrammeled by man, where man himself is a visitor who does not remain.

— From the Wilderness Act, signed into law by President Johnson on Sept. 3, 1964.

With those “surprisingly lyrical terms,” as Elizabeth Kolbert rightly rates them, our national government undertook an audacious and unprecedented step toward saving wild places and wild things — beginning a journey, I want to hope, that remains unfinished.

This rare American victory of self-restraint over ceaseless trammeling deserves all the celebration it is getting this week. All the analysis and second-guessing, too.

Having spent some long hours reading around the territory, I concluded at last that I had no hope of writing anything more lyrical than what had already been put into print. Instead I offer selections from the best of what I found, lightly compressing the quoted passages for reasons of space and pace.

Like many a friend, scholar or champion of wilderness, I have at times been able to recite the law’s key definition italicized at the top of this post. But I didn’t know until Tuesday that Howard Zahniser, the Wilderness Society co-founder who wrote it, once “confided to a colleague that he wished he were writing poetry instead.”

This I learned from Michael Schulson’s essay on “The Religious Roots of The Wilderness Act,” published in the journal of Washington University’s Danforth Center on Religion and Politics.

“If I had to do this again,” Zahniser wrote, “I would much prefer to state all this in iambic rhyming couplets or even in the sequence of sonnets.”

Zahniser drafted his bill in prose, of course, and its details, at least initially, seem prosaic. The Wilderness Act bans all kinds of motors, roads, and permanent structures from large tracts of American territory. It provides a legal definition of wilderness, as land that’s “untrammeled by man” with a “primeval character and influence.” Over the last half-century, the federal government has used the Act to preserve more than 100 million acres of land. It may be the most comprehensive, stringent land protection bill in legislative history.

We take it for granted that wild, inhuman areas are beautiful, uplifting, and worthy of protection; that the natural is superior to the artificial; and that something pristine and untouched by human hands is better than something that’s been touched by human interference. None of these ideas, though, just emerge automatically in the depths of our modern souls. These ways of thinking aren’t religious, exactly. But they’re entangled with religious stories, and religious experiences.

Schulson finds the roots of these notions in three spiritual gardens: the one in Eden, the Paradise Lost of Milton, and the portion of Yosemite that gained permanent protection with Lincoln’s signature in 1864. It’s an interesting take and deftly done.

From religion to science

Shifting from the religious perspective to the scientific, I commend David Biello’s musings in Scientific American on a question that occupied several commentators:

Is a hands-off approach to wilderness protection workable, or even meaningful, in an era where the human influence is felt everywhere, especially but not only in climate disruption?

In the Anthropocene, we will have our novel ecosystems that mix old and new plants and animals, and perhaps even missing species resurrected thanks to synthetic biology. We may even intervene purposefully on a planetary scale to stave off the worst warming from ever-rising CO2 levels as we burn more fossil fuels. But the wilderness will remain in some form, going about its own business in its own way.

Wilderness poses this fundamental question at least: what kind of place do we want for our home? Will our terrestrial abode retain an abundance of plants, animals, microbes and fungi like the world Homo sapiens was first born into? Or will the Earth become a vast monoculture, a grim subset of nominally wild species that co-exist in symbiosis with modern human civilization, like rats and seagulls?

The natural world can only persist now as a deliberate act of human will. That will require firm human purpose as a gesture of humility, yes, but also a form of self-protection. “This is not really an ‘environmental problem.’ It’s a human problem,” writes environmental historian Roderick Frazier Nash of the University of California, Santa Barbara. “What needs to be conquered now is not the wilderness, but ourselves.”

Although the Wilderness Act is often described as having gained congressional passage with a single dissenting vote, that belies its long and difficult route to passage, through successive waves of compromise, after it was introduced by Minnesota’s Sen. Hubert Humphrey (among others) in 1956.

A detailed, not terribly quotable history can be had from Congressional Quarterly, which documents the most important Senate vote as 73-12 in favor and — for trivia players in the house — identifies the lone nay vote in the other chamber as Rep. Joe Pool, a Texas Democrat.

Kolbert’s National Geographic piece makes plain, too, that the law’s proponents were responding not just to the wholesale destruction and development of wild places, but also to a style of protection in national parks and forests that they found misguided:

During the Great Depression tens of thousands of Americans were put to work by the federal government in national parks and forests. They cleared trails, erected shelters, and laid down mile after mile of pavement. The Going-to-the-Sun Road in Glacier National Park was opened in 1933, Skyline Drive in Shenandoah National Park in 1939. The new highways opened up the parks to millions more visitors.

But the very success of these efforts troubled many conservationists, who worried that the country’s most majestic landscapes were being turned into so many roadside attractions. A group of them, including Aldo Leopold, got together to defend the national parks and forests against overuse. They called themselves the Wilderness Society, and their first mission statement denounced the roadbuilding “craze.”

“The fashion is to barber and manicure wild America as smartly as the modern girl,” it said. “Our duty is clear.” In 1924, while working with the Forest Service in New Mexico, Leopold had persuaded his superiors to designate 755,000 acres of the Gila National Forest as roadless wilderness. The challenge was to persuade Congress to give that idea national scope.

It was a monumental achievement, no question, to set aside 54 areas totaling 9.1 million acres for wilderness protection in 1964, even if some of them — including the Boundary Waters Canoe Area — were already heavily protected.

Today, the National Wilderness Preservation System includes more than 750 places totaling more than 109 million acres, most of it national forest land — and more than half of it, let’s remember, in the single state of Alaska. Designated wilderness comprises about 4.5 percent of all the land in the United States; subtract Alaska (and Hawaii) and that number falls to a bit more than 2 percent.

Many a writer is dealing this week with the future of protection efforts, and the outlook for major advances is not generally seen as favorable.

Over at the International Business Times, Maria Gallucci spent some time with Jeff Ruch of Public Employees for Environmental Responsibility, whose members work for the federal land and natural resources agencies. He pointed out that the designation of a parcel in Michigan’s Sleeping Bear Dunes this past spring was Congress’ first addition to the system in five years — 32,500 acres, while another 26 million languish somewhere “in the pipeline.”

PEER also contends that the Park Service is failing to meet a host of legal requirements under the Wilderness Act, including conducting assessments of lands, preparing wilderness management plans, creating clearly defined boundaries for designated areas and assessing all road-less land for wilderness eligibility. The alliance has filed five lawsuits against the agency in recent years, including a 2011 legal challenge to keep off-road vehicles out of Florida’s Big Cypress National Preserve.

And Phil Taylor, writing in Greenwire, predicted that wilderness protection faces a harder road in its sixth decade than in the past five. And he noted that the act’s empowerment of Congress — instead of federal agencies — to apply the wilderness label within their holdings was a compromise that Zahniser found a particularly bitter pill.

Many of the wilderness designations to date have secured protections for high-elevation “rocks and ice” with relatively little controversy. What’s left to protect are lower-elevation lands coveted by energy developers, off-highway vehicle riders and ranchers. Even when deals can be ironed out, wilderness bills must navigate a gantlet of congressional partisanship.

The 112th Congress was the first since the 1960s to not designate a single acre of new wilderness — it actually reduced the size of the National Wilderness Preservation System by 222 acres.

The 113th Congress has hardly fared better. In March, it passed a bill backed by Michigan’s delegation to designate [the parcel at Sleeping Bear], but only three sessions of Congress since 1964 have designated fewer acres.

A suggestion for further reading, if I haven’t worn you out: An actual syllabus for study of the Wilderness Act, including links to Wallace Stegner’s “Wilderness Letter” and writers from Aldo to Zahniser in the “Blue Review” journal of Boise State University’s College of Social Science and Public Affairs.