The way to make God laugh, it’s been said by Woody Allen and other philosophers, is to make a plan.

But if you really want to make him howl, and call his buddies over to share in the fun: Make a garden plan.

I used to know this, years ago: Early every spring I would lay out my vegetable gardens on graph paper, the rows and patches and trellises color-coded and drawn to scale. Come Mother’s Day I would transfer the design to the dirt with a trowel in one hand and a tape measure in the other.

And then, through weeks of planting and tending, I would follow my scheme as closely as possible, making the inevitable adjustments here and there … right up until the point, usually mid-September, when I surveyed the chaos and wondered what I’d been thinking. Eventually winter would come, I’d put everything to bed, and proceed to forget most of whatever I’d learned.

This April, as I planned a new garden for the first time in a decade or more, I was determined to do it all differently from the ground up — starting with not using the ground at all.

The first inspiration came from my neighbor Nancy, a gardening wizard with vast plantings of flowers, vegetables, fruits and other flora, always lush and beautiful. She has been working with a variety of containers and planting bags in recent years, and offered me a couple of EarthBoxes from her collection to try out.

No tilling, no weeds

These are advanced gardening gizmos, developed  by commercial tomato growers, that hold two cubic feet of planting medium above a water reservoir, in an arrangement that delivers both moisture and fertilizer in a steady, optimized flow and promises to be virtually weed-free.

Outdoor hydroponics is how I think of it, in attractive, durable, plastic containers that resemble terra cotta window boxes on wheels, which means you don’t even have to kneel and can roll them back and forth from sun to shade as your plantings change or bolting time approaches.

No planning is required with EarthBoxes — in fact, it’s actively discouraged by the manufacturer, who supplies a set of placement diagrams tailored to typical plant choices, for a growing surface that, after all, is but 2 feet long and 1 foot wide. What’ s to plan? What could possibly go wrong?

When I told Nancy my intention to use the boxes for salad greens and herbs, aiming to supplement the twice-a-month deliveries from our CSA share, she just chuckled and said, “You’ll have more greens than you can keep up with.”

Not possible, I thought. I remember years of too many tomatillos, too much zucchini, way too many string beans. I remember the year of the eight basil plants, or maybe it was 10, when the harvest came into the kitchen by wheelbarrow and I spent a weekend putting up 16 pounds of semi-pesto — just the leaves, garlic and oil — frozen into three-ounce cubes and foil-wrapped  in a frenzy I imagined might have resembled hashish processing.

But too many salad greens? Nah.

And so, with the special strain of unfounded optimism  that comes from forgotten expertise, I started my 72 peat-plug seedlings … and then another 72 as our slow, cold spring crept along and I paced in front of the windows and decided to try a straw-bale garden, too, because, well, why not?

The straw-bale garden has some conceptual similarities to EarthBoxes in the sense that both involve containerized gardening’s benefits of easy control over water and fertilizer inputs, high yields from small spaces, relatively minimal preparation (compared to, say, roto-tilling a patch of the backyard) and little if any weeding.

The “containers” are bales of wheat straw, placed on the lawn over a barrier of landscape fabric to keep the grass from growing up through them. For two to three weeks or so, the bales are conditioned with nitrogen fertilizer and soakings from a garden hose, which composts the bales from the inside out.

At a pace dependent on the weather — but susceptible to acceleration, I found, if you cover them with dark-colored tarps — the voids between the straws fill up with a blackish, fertile slime that only stinks for a while and yields amusing eruptions of weird mushrooms from time to time.

When conditioning is complete, you wind soaker hoses back and forth across the tops of the bales, to simplify watering, then add a layer of peat moss or planting mix to retard evaporation as the water that has soaked down from the hoses rises back up through the wicking action of the straw.

To create a space for seedling or bedding plants, you just pry the straw apart and insert the plant — either on top of the bales or, if you like, into the sides. You can sow seeds directly into the surface as well. And when the final harvest is done, you can cover the bales with tarps and use them for a second and possibly third year, or cut the baling twine and pitchfork the collapsed remains elsewhere for further composting.

Although the method has been massively popularized by Joel Karsten of Roseville, it resembles a practice known as “hot composting” that may have been developed in California and possibly — I read or heard this somewhere, but can’t find a source now — by the pot growers of Humboldt County.

Without question, however, Karsten has lifted the technique from obscurity and to a large, nationwide following, perhaps bordering on a craze.

When I went to the farm store in Roberts, Wisconsin, to buy my bales, I anticipated having to explain what I was up to. But right inside the door was a display of bale-gardening supplies with Karsten’s book at the center, along with a poster advertising his upcoming appearances.

I bought eight of them at $6 apiece — for a total right around the retail price of a single EarthBox — and arranged them in a block two bales wide and four deep, with the long sides together, creating an overall  “container” about three feet wide and 12 feet long.  Once again, planning was minimal, as normal in-the-dirt spacing doesn’t apply to bales and Karsten’s advice is highly approximate.

Two staked tomato vines went in at one end. A zucchini vine anchored the opposite end, with two more spaced evenly toward the tomatoes and at the outer edges; I imagined leading the vines downward and alongside the bales. I placed a couple of trailing nasturtiums in each side with the same idea in mind.

In between I planted patches of basil, dill and arugula; scatterings of kale and edamame seedlings; rows of chard, collards, radishes, spinach, edamame, escarole …. and some other stuff that now, approaching mid-September, I don’t remember and can no longer locate in a garden that has become seriously unruly. 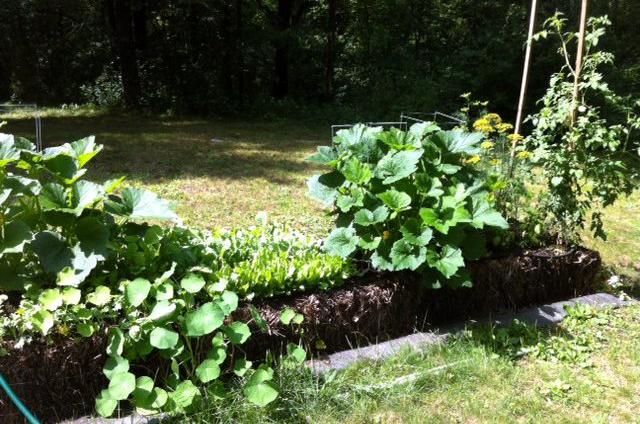 Everything has done well except the radishes, which failed to thrive in either the bales or the EarthBoxes, I suspect because the conditions were too cushy. And some things have done way too well.

At least twice a week, it seems, I’ll cut 15 or 20 of the hugest leaves off the zucchini vines to keep them from shading out the shorter plants, taking note of where the small squashes are forming. Next time I check, the leaves have spread out larger than before, the escarole and chard are looking spindly, and the zucchini have swollen to the size of a cat.

When they failed to sprawl as hoped, I shored them up with tomato cages; having tried vertical climbing, they decided to sprawl.

The nasturtiums took their own sweet time getting under way; it was a few weeks before I noticed much change in size and a couple more before the first blossoms came. Then Sallie and I went north for a few days and returned to find them sprawled all over the bales, as if trying to outdo the zucchini, flattening the tender greens in their path.

A steady harvest of greens

Meanwhile, the EarthBoxes continue to produce lettuces, chard, mustard greens and basil in quantities that are short of overwhelming, but only just, and only because I’ve taken to having greens for breakfast. We harvest the leaves as they come and the leaves keep coming, and either this harvesting method or sheer good luck with their placement and the weather kept the plants from bolting seriously until late August.

A main objective this summer was to let my approach to cooking and meal-planning be driven by the cycle of the season and its bounty, and man oh man, have I come up with a bunch of ways to stuff and roast a huge zucchini. Best so far: Italian sausage, cherry tomatoes, sweet onions and bell peppers with a bit of panko and cooked Israeli couscous to hold the mix together. 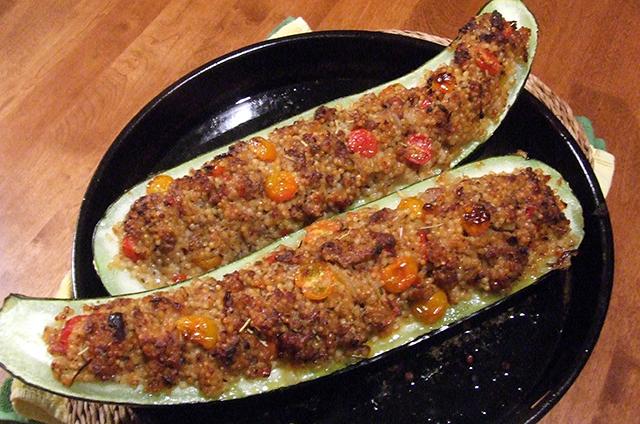 My favorite recipe find, though, has been for zucchini butter. I found versions of this in a few places, the first perhaps being at the Local Foods page on about.com. Here’s mine: 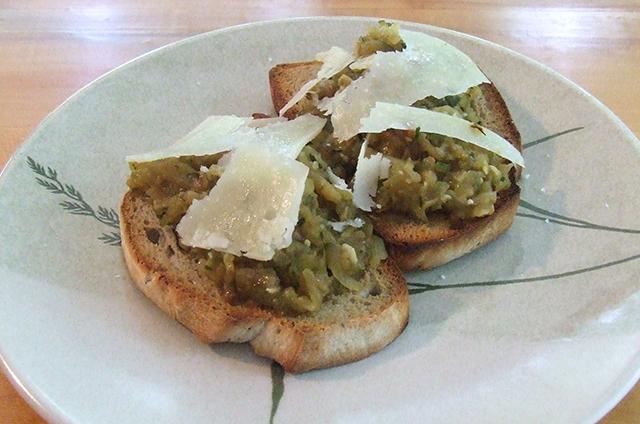 (* A note on peeling: With small squash, the grated peel will soften completely and add nice slivers of deep green to the finished dish; with larger ones, the skin may be so fibrous that it remains somewhat chewy despite the long cooking time, which I don’t mind but you may.)

Letter from Skunk Hollow: Straw-bale bounty, with zucchini the size of a cat