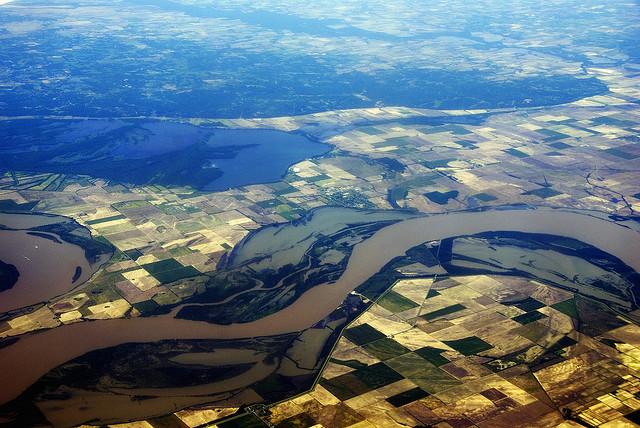 CC/Flickr/Katy Silberger
Much of the pesticide load in the environment comes from large-scale farming.

I am ever on the lookout for news of improving environmental quality, and so was drawn to the New York Times report last Friday headlined, “Pesticide Levels in Waterways have Dropped, Reducing the Risks to Humans.”

Well. That’s one way of looking at it, I guess.

The article, by the admirable Michael Wines, dealt even-handedly if somewhat swiftly with a set of scientific findings on trend lines in pesticide sampling that are — as you might well imagine, given the subject matter — quite complex.

And not so encouraging overall, by my reading.

The analysis was prepared by scientists of the U.S. Geological Survey, which monitors pesticide levels in a shifting set of about 200 streams and rivers around the country.

This particular report compared the results of sampling conducted in two different decades, 1992-2001 and 2002-2011, and looked at overall trends between those periods. It was published last week in the journal Environmental Science & Technology.

So, OK, it’s undeniably good news is that only one stream had pesticide levels above federal standards for human health in the latter decade, compared to about one-fifth of streams in the earlier period.

(I had to ask which unfortunate stream that was, and learned from Wes Stone, a hydrologist in USGS’ Indianapolis office, that it was  Maple Creek near Nickerson, Nebraska, which was high in the agricultural herbicide atrazine. Stone cautioned that this is not a measure of drinking water quality, as the samples are taken from untreated stream water. On the other hand, it’s not a blip: The standard is whether, over the course of at least one year, a stream’s mean level of contamination exceeds the standard.)

Because so much of the pesticide load in the environment comes from large-scale farming, USGS classifies its monitoring and reporting into three categories — those in rural/agricultural areas, those in urban areas, those in areas of mixed land use.

(Two metro-area streams are in the assessment — the Mississippi River, which is classed agricultural, and Shingle Creek, classed urban; more about their test results in a moment.)

A surge in urban waters

From decade to decade, things stayed about the same in mixed-use areas; 45 percent of streams exceeded an aquatic-life standard, down from 46 percent. Agriculture areas improved more, with 61 percent exceeding a standard, compared to 69 percent in the previous decade.

But in urban areas, things got dramatically worse, with 90 percent of streams exceeding an aquatic life benchmark, compared to just 53 percent in the previous decade.

What’s going on? Several things, according to USGS:

One example is diazinon, an organophosphate insecticide, which was banned for non-agricultural uses like home gardening in 2004. Another — though not an insecticide — is atrazine, whose use has been declining in the last 10 years, and whose presence in agricultural streams is also declining, although it is both mobile and persistent.

More than half go untracked

And that brings us to the really bad news, as I see it. Although Americans in all walks of life use some 400 pesticides on a regular basis, fewer than half are even included in USGS monitoring, because of resource constraints.

That goes for volume as well as number of products. According to a pair of telling charts in another recent report on this topic, the USGS assessments cover pesticides that account for less than 220 million pounds of the more than 570 million pounds of product applied each year.

Among herbicides, most of the unmonitored material is in glyphosate products; for insecticides and fungicides, grouped together for charting purposes, it’s mostly fungicides (of which few are tracked) but also neonicotinoids (the newer insecticides implicated in the honeybee die-offs, and also as a problem for other insects and invertebrates).

The charts also show that while insecticide use has declined dramatically since the early 1990s, from just under 100 million pounds per year to a little over 60 million, the surge in herbicide use has more than made up for that. 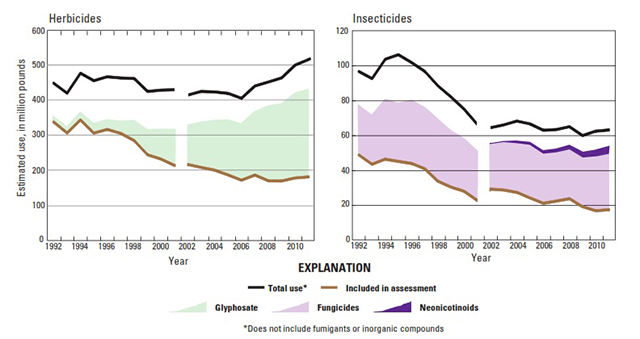 USGS
Although insecticide use has dropped dramatically since the 1990s, herbicide use has more than made up the difference in total pesticide use, and the U.S. Geological Survey still tracks less than half the volume in its stream assessments.

The story in Minnesota

She said Shingle Creek was tested for 16 pesticides and breakdown products during two overlappoing eight-year periods, 1996-2004 and 2000-2008. Most were at levels too low to detect or characterize clearly. However:

As noted earlier, atrazine isn’t typically applied in urban settings, but it doesn’t stay put, either, and nowadays only glyphosate is used more heavily among herbicides in the U.S. The trend line in Shingle Creek, Ryberg said, is a demonstration of the “ubiquity” atrazine has achieved.

She also noted that the upward trend in levels of carbaryl, used for professional turf management, were reversed a bit in the later period, but not enough to be statistically significant.

The news from the Mississippi River sounded a bit better. Ryberg said the monitoring took place in three overlapping periods, 1992-2001, 1997-2006 and 2001-2010. Most of the significant trends were for herbicides, she said, and most of them were downward; the data for insecticide concentrations were too sparse to support trend calculations.