Rail shipments of U.S. crude oil produced in the fracking zones rose by 2,400 percent from 2008 to 2012, according to a report issued Monday by the Government Accountability Office — a period when oil production from the shale and sandstone formations, though booming, increased by less than sixfold.

Main result: More deaths and injuries past and future, because rail shipping is inherently more prone to these than pipeline transport. Also, a much higher risk of catastrophe as oil-laden “unit trains”  of 80 to 120 tank cars move through the nation’s largest, densest metropolitan areas, including the Twin Cities. (More oil is moving by truck and barge as well.)

It is difficult, for some reason, to clearly attribute injuries and fatalities to rail shipments of oil and gas versus other cargo. However, GAO’s auditors found that from 2007 to 2011,

Fatalities averaged about 14 per year for all pipeline incidents reported to the [Pipeline and Hazardous Materials Safety Administration, part of the U.S. Department of Transportation], including an average of about 2 fatalities per year resulting from incidents on hazardous liquid and natural gas transmission pipelines.

Pipelines have problems, too

Of course, pipelines are vulnerable to accidents as well, sometimes with massive environmental consequences. And the report lists a number of reasons why we might not want to see pipeline utilization and expansion move at maximum speed anyway.

Looking particularly at “gathering lines,” which collect gas and oil at drilling sites and move it to central locations for shipment by long-distance pipeline, rail or other means, GAO found that:

All of which, says GAO, “raises concerns about the adequacy of emergency response preparedness, especially in rural areas where there may be fewer resources to respond to a serious incident.” (my emphasis)

Although the “fracking boom” is often thought of in terms of natural gas production, the increase in oil production has actually been proportionally greater:

To put this into context, according to U.S. Energy Information Agency data, the United States consumed an average of more than 18 million barrels of petroleum products per day in 2012. According to EIA officials, oil from shale and tight sandstone formations accounts for 31 percent of total U.S. production. According to EIA, increased production in 2012 and 2013 was the largest annual increase since the beginning of U.S. commercial crude oil production in 1859.

Much of the increase in crude oil production has been from shale formations, such as the Bakken in North Dakota, the Eagle Ford in Texas, and the Niobrara in Colorado. According to EIA officials, U.S. production of crude oil is expected to continue to increase — by 48 percent from 2012 to 2019 — and will remain above the 2012 level through 2040.

As for natural gas:

In September 2012, we found that, assuming current consumption levels without consideration of a specific market price for future gas supplies, the amount of domestic technically recoverable shale gas could provide enough natural gas to supply the nation for the next 14 to 100 years. Much of the increase in natural gas has been from shale formations, such as the Barnett, Fayetteville, Haynesville, and Marcellus formations.

But investments in transportation infrastructure have grown far more slowly, the GAO found.

Though capital investments in U.S. infrastructure for oil and gas transportation, processing, and storage have increased significantly in recent years — by 60 percent from 2008 to 2012, according to a December 2013 industry report — expansions in infrastructure have not kept pace with increased domestic oil and gas production.

In the United States, most oil and nearly all natural gas are transported by pipeline. According to EIA data, U.S. refinery receipts of domestic crude oil by pipeline increased almost 25 percent from 2008 to 2012, from 1.6 billion barrels to nearly 2 billion barrels.  However, according to a number of studies and publications we reviewed, including a 2013 report from the Fraser Institute, oil and natural gas production in the United States is outpacing the capacity to transport the resources through existing pipeline infrastructure. …

GAO found that most of the pipeline infrastructure in use today was built in the 1950s, 1960s and 1970s and sized not only to the demands of those times but to the directional flows as well — south to north, whereas much of today’s flow is from west to east. This means, according to industry figures, that oil production in North Dakota alone exceeds pipeline capacity by 300,000 barrels per day. 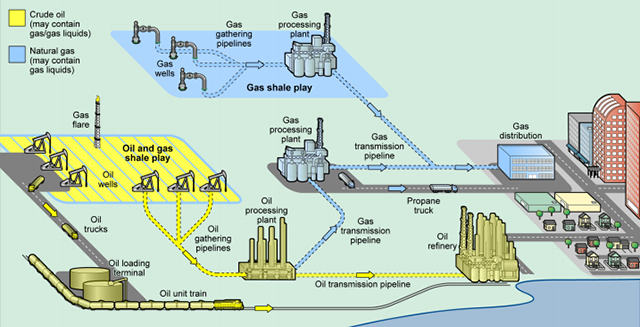 You might think that this would be reason enough to bring infrastructure investment more in line with production levels and revenues, but if so, you are probably not in the oil and gas business. One consequence of undercapacity is supply constriction, and one consequence of short supply is, ta-dah, higher prices.

An incentive to waste

Another and particularly obnoxious consequence is a far stronger incentive to engage in the ridiculously wasteful and polluting practice of “flaring” excess gas production at the wellhead.

In January 2014, the North Dakota Industrial Commission reported that nearly 30 percent of all natural gas produced in the state is flared. According to a 2013 report from Ceres, flaring in North Dakota in 2012 resulted in greenhouse gas emissions equivalent to adding 1 million cars to the road. …

In addition to the risks to air quality from flaring, we found in October 2010 that flaring natural gas has economic implications, and in April 2014 the Environmental Protection Agency reported that flaring results in the destruction of a valuable resource. …

There’s much more to this report, including sections on tank-car safety, bad barge accidents — including some notable spills in the Mississippi River — but I’ve gone on long enough. The full report can be had right here.

Good luck searching out other media summaries of the content, though. As of this writing, about all I found was a brief piece over at NBC News, which has devoted some serious investigative resource to the issue. You can find its good work on the pipeline side of the issues here, and the railroad side here.