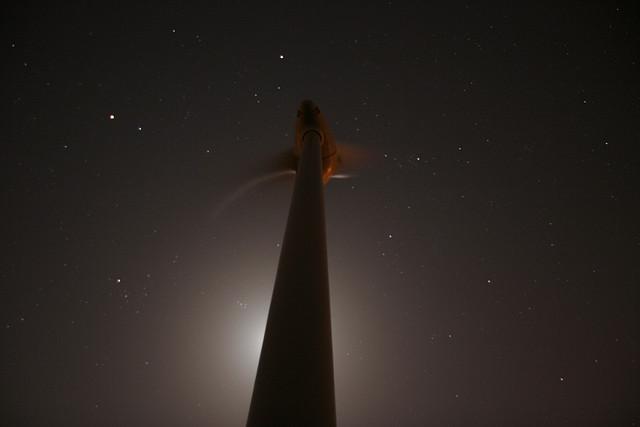 CC/Flickr/Luke Westall
On approaching wind turbines, bats appear to use air-flow sensations registered by wing hairs to guide them, often to their sorrow.

A new study of bat behavior at wind farms suggests that the towering turbines may actually be attracting the winged mammals to their doom — especially those of the newer, monopole designs that are thought to be less alluring to birds.

If you have ever watched bats scooping up mosquitoes while dodging obstacles, and each other, in a summer sky at twilight, you might well be thinking:

Huh — why doesn’t their excellent echolocation capacity protect them from collision with such towering, slow-moving machinery?

The tentative conclusion of the new paper, published in the Proceedings of the National Academy of Sciences, is that tree bats in particular are drawn to the big turbines by vision, mistaking them in silhouette for tall trees and prime roosting territory.

On approaching the turbines, bats appear to use air-flow sensations registered by wing hairs to guide them, often to their sorrow.

And to our sorrow as well, I must say, for reasons that go beyond the authors’ narrative of bats undone by “behaviors that evolved to provide selective advantages when elicited by tall trees, but are now maladaptive when elicited by wind turbines.”

Hibernating bats are already beleaguered by white-nose syndrome, a spreading epidemic whose catastrophic impact on their populations has newly underscored their value as providers of pest-control and pollination services valued in the billions annually.

The new paper, by scientists primarily from the U.S. Geological Survey, does not attempt is to estimate the number of bat fatalities attributable to wind farms, but a report on its findings Monday in the Washington Post cited other recent research putting the number as high as 600,000 or even 900,000 annually across the United States, which at the high end could rival the ravages of white-nose syndrome in some years.

It could also mean that wind farms are killing even more bats than birds, whose losses have received far more attention.

Of course, there are far more birds in the sky than bats, so even if the death tolls were equal the proportional impact on bats would be far greater.

A key passage from the paper, lightly compressed:

Before recent observations of dead bats beneath wind turbines, fatal collisions of bats with tall structures had been rarely recorded. [Another difference from birds, who die by the millions each year on colliding with big buildings.]

Most fatalities reported from turbines in the United States, Canada, and Europe are of species that evolved to roost primarily in trees during much of the year (“tree bats”), some of which migrate long distances in spring and late summer to autumn. In North America, tree bats compose more than three-quarters of the reported bat fatalities found at wind-energy sites.

Another prominent pattern in bat fatality data from northern temperate zones is that most fatalities are found during late summer and autumn, sometimes with a much smaller peak of fatality in spring.

Concurrent involvement of species with shared behaviors suggest that behavior plays a key role in the susceptibility of bats to wind turbines, and that tree bats might somehow be attracted to wind turbines.

How to watch bats in the dark

To investigate this possibility, the researchers set up shop at northwest Indiana’s Fowler Ridge wind farm, a facility of 355 wind turbines scattered across 50,000 acres near Lafayette.

They got permission to outfit three turbines with heat-sensitive and infrared video surveillance cameras to monitor  bats in the dark, when they are most active, as well as radar equipment and acoustic detectors, all set to record activity from the ground to a height of 200 feet.

They also got permission to change the speed of the turbines, in order to test a notion that bats can be saved by slowing down the blades during peak migration periods.

During the two-month study period, 3 to 4 million flying critters were detected, the great bulk of them insects, but about one-quarter of them vertebrates. Of the 1,261 “flying animals” caught clearly on video, 79 percent were identified as bats and another 15 percent as “bat-like”; only 2 percent were birds.

Excerpts from the findings:

Most (88%) video detections of bats involved flight trajectories indicating the individual was moving toward the turbine,  hereafter referred to as “focal” behavior.

We observed multiple focal behaviors of bats at turbines, several of which have not been previously reported. Behavior included close approaches to the monopole and nacelle (enclosure of machinery on top of monopole to which rotor and blade are attached), close approaches to slowly moving blades, flight loops and dives centered on the turbine, distant hovering, and chasing other bats toward or near the turbines.

Most bats exhibiting focal behavior made single approaches and then moved away (72%), but many (27%) approached turbines multiple times during a detection and such interactions at times lasted several minutes.

Bats were more frequently detected during periods when the moon phase was more than half full and visible above the horizon. Because the thermal cameras do not rely on reflected light, we assume this relationship with moonlight was attributable to biological causes rather than detection bias.

Only 12 fresh bat fatalities were found beneath the test turbines during this period, although more probable collisions were noted; this might support the contention that corpse counts alone underestimate the problems at wind farms because injured bats may move away and perish elsewhere.

The interactions were also too few to test the relationship of wind and turbine speeds to collision rates. However, the researchers did find that bats were more likely to approach the turbines when wind speeds were low, whether the blades were spinning or not.

When wind speeds were higher, however, bats were less likely to approach when the blades were spinning then when they were held motionless, suggesting detection and avoidance.

Interestingly, while the researchers’ radar detected migrating birds in large numbers, the cameras detected few near the turbines themselves, suggesting that birds also avoid the structures. And the acoustic sensors, beaming skyward from the tops of the turbines, found that lots of bats were choosing to fly overhead as well.

The researchers saw no clear attempts by bats to land on the turbine blades themselves, but many close approaches to the nacelles and monopoles.

Because bats appear to closely investigate the structures during low-wind periods, “and sometimes linger for minutes to perhaps hours,” the researchers suggest that fatalities could be reduced by managing the turbine blades to prevent rapid acceleration during wind gusts.

And they suggest wind-farm operators take a lesson from the Texas facility which seems to have reduced bat fatalities by fitting the structures with flashing red aviation lights — a helpful recognition that bats, after  all, are not blind.

The full paper, “Behavior of bats at wind turbines,” is freely available in PDF format here.

Turbines may be luring bats to their deaths, wind-farm research suggests