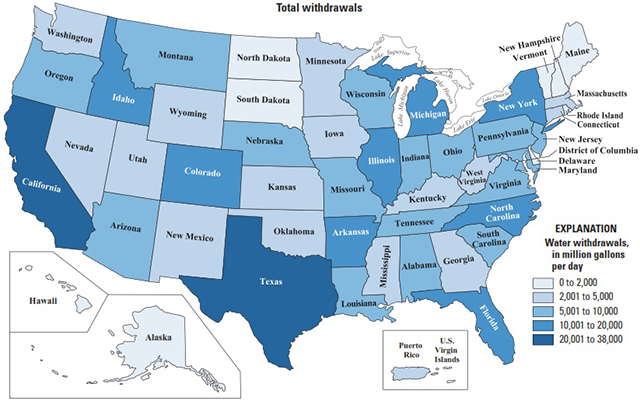 USGS
Estimated use of water in the United States in 2010

A rare piece of good environmental news came across my desk on Wednesday, and a pretty big one at that:

Water use across the United States is in a steep and probably continuing decline — all kinds of water, and for almost all uses except for mining and fish-farming, where demand is still going up.

How steep a decline? As of 2010, the latest year for which comprehensive figures are available, Americans were using significantly less water than at any point since 1970, and in some categories since the 1960s or earlier.

Indeed, in the period from 2005 to 2010, total usage declined about 13 percent. And according to the U.S. Geological Survey, which assembles and analyzes the figures every five years, the explanation is this simple: Improved management and other conservation measures are more than offsetting growth in nation’s population and its economy.

For so-called saline water, withdrawals from surface sources dropped 24 percent in that five-year period. (This is not seawater, but rather water containing levels of dissolved solids high enough to make it undesirable for drinking water and most industrial uses.)

Saline groundwater, however, was used at more than double the rate in 2010 over 2005, mostly because of withdrawals for mining operations — one of the very few sectors in which water use is consistently going up in America, by nearly 40 percent in 2010 over 2005.

One big caveat before we go any further down this highly interesting road: USGS measures water use purely in terms of water taken out of the supply for some purpose; it doesn’t attempt to subtract the amount of water returned to the source.

That net figure, sometimes termed “consumptive use,” was part of the service’s calculations back in 1950, when it started issuing these reports twice a decade. But because of limitations on available data and the cost of overcoming them, it stopped estimating return flows after 1995.

Where does it go? The largest users by far are electric power plants, agriculture and public water systems; together, they accounted for 90 percent of all withdrawals in 2010. However, use is down in all of those sectors:

Withdrawals in 2010 for thermoelectric power were 20 percent less and withdrawals for irrigation were 9 percent less than in 2005. Similarly, other uses showed reductions compared to 2005, specifically public supply (–5 percent), self-supplied domestic (–3 percent), self- supplied industrial (–12 percent), and livestock (–7 percent). Only mining (39 percent) and aquaculture (7 percent) reported larger withdrawals in 2010 compared to 2005.

By the way, that 5 percent decline for public water systems, to 42 billion gallons a day, is the first calculated by USGS since the reporting program began 64 years ago, when the U.S. population was a bit over 150 million. It’s more than twice that now, and a larger portion than ever before are on city water:

The number of people that received potable water from public-supply facilities in 2010 was 268 million, or about 86 percent of the total U.S. population. This percentage was unchanged from 2005. Self-supplied domestic withdrawals [that’s me and my well] were 3.60 Bgal/d, or 3 percent less than in 2005. More than 98 percent of the self-supplied domestic withdrawals were from groundwater sources.

Self-supplied industrial withdrawals were 15.9 Bgal/d in 2010 [nearly all of it fresh groundwater], a 12 percent decline from 2005, and continued the downward trend since the peak of 47 Bgal/d in 1970.

Despite justified concern about the rate of groundwater pumping in Minnesota, primarily for agriculture, we aren’t in the big leagues nationally in terms of irrigation withdrawals. The top 12  states, in order, are California, Texas, Idaho, Florida, Illinois, North Carolina, Arkansas, Colorado, Michigan, New York, Alabama and Ohio. Together, they accounted for more than half of total withdrawals in the United States for 2010. Although the rate of population growth is slowing in the U.S., the report attributes the changing usage patterns to other factors as well, and notes that many parts of the country still grapple with short supply. Also, that changing climate is a complicating and non-uniform factor:

In parts of the United States, communities have sought additional water sources or instituted water-conservation measures to meet increasing demands. New cooling-system technologies and wastewater management practices at thermoelectric power plants and industrial facilities are examples of water-saving practices that are being implemented. Power plants have reduced the demand for cooling water by implementing more efficient cooling systems, such as changing to recirculating systems or building new plants with dry-cooling systems. Industrial facilities are using more efficient water-conserving manufacturing technologies, driven by higher costs for water and energy.

Industrial manufacturing has declined with more goods being produced outside of the United States. Increases in industrial reuse and recycling of wastewater help to reduce withdrawals from the available resources and treated discharges to surface waters over time.

Climate fluctuations affect water use, particularly for irrigation, power generation, and public supply. In 2010, the contiguous United States (CONUS) experienced average annual air temperatures slightly above normal and precipitation above the long-term average. An abnormally cold winter with abundant moisture resulted in record-breaking precipitation in the East and Northeast for December-February.

While the East enjoyed an abnormally warm spring, the Western United States experienced below normal temperatures. The summer of 2010 was the fourth warmest on record for the CONUS, but was the ninth wettest in 116 years in the Upper Midwest and Great Lakes. The West and Southeast had below-normal precipitation during the summer. The fall of 2010 was warmer than normal, but the Upper Midwest and Northeast continued to receive above-average precipitation, while Florida suffered through the second driest September–November period on record.

So, what about the sectors where use is going up? That would be aquaculture and mining, and the latter is already significant in Minnesota, and perhaps poised to become more so with planned expansions of taconite and silica-sand mining, and the possibility of new precious-metals mining.

The full report, with a wealth of tabular material in its 64 pages, can be read or downloaded here.

Despite growth, U.S. water usage has fallen to levels last seen in 1970