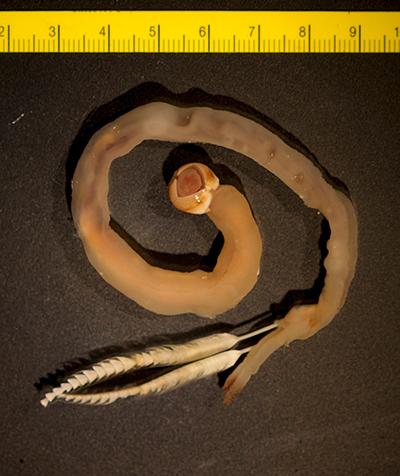 Courtesy of Dan Distel, Ocean Genome Legacy Center at Northeastern University
The shipworm is at best an unlovely creature.

The shipworm is at best an unlovely creature. Reviled for centuries as a sort of aquatic termite, this voracious, lampreyish wood-borer is blamed for wrecking the ships of Columbus, the dikes of the Netherlands and, at the beginning of the last century, the wharves of San Francisco.

But within its primitive tubular body, the shipworm may carry a highly elegant solution to perhaps the most vexing and persistent contemporary problem in biofuels: how to make ethanol from woody materials like switchgrass and aspen — even waste from a sawmill — instead of from food crops like corn, and without resorting to extensive and energy-intensive processing that raises production costs and lowers net energy returned.

Woody carbohydrates’ resistance to breakdown poses an enduring barrier to industrial-scale production of cellulosic ethanol, and it is unbreached despite a century of sporadic effort and a more recent ramping up of private and government investment.

But a finding that looks like a possible new pathway emerged last week in a research paper devoted to the gills, the gut and the populations of prodigious wood-digesting bacteria residing within the shipworm Bankia setacea.

Dan Distel, principal investigator in the shipworms research (please see correction at end), explained it to me this way in an interview from his lab at the Ocean Genome Legacy Center at Northeastern University:

“We’ve known about the bacteria in shipworms since 1974, and it’s long been generally suspected that they were involved in the digestion of wood, but we didn’t have the tools to demonstrate it.  We needed the new tools of molecular biology — genomics and proteomics —for that.”

Gene-mapping enabled researchers to identify the particular types of bacteria at work in the shipworms’ gills, which take up about one-third of their strange bodies. (Although we call them worms, and they look like worms, they are actually mollusks — close cousins of the steamer clam with a two-part shell, flanking the mouth, covered in tiny teeth and employed as a drill bit).

Next, Distel and associates were able to associate particular genes with production of specific proteins —enzymes — that are shipped from the gills to the gut, where they turn the complex carbohydrates of wood into usably simple sugars.

The shipworm appears to be unique among animals in this approach to digestion, and exactly why its system was built this way remains a mystery, along with some aspects of how the enzymes are transported.

However, Distel’s team has established that the process relies on only four bacterial strains and a mere 45 enzymes, and this small scale is a big deal.

On the industrial scale, turning cellulosic material into sugars for fermentation is a complex, multistage process of breaking down woody lignocellulose’s three constituents — cellulose, hemicellulose and lignin. Just getting the raw material down to digestibly small particle sizes can require treatment with acids, heat, high-pressure “steam explosion.”

So there’s been interest in learning how this happens in low-intensity biological venues like, say, the digestive tracts of termites and cattle.

When you look in the digestive system of a cow, in the rumen, you find thousands of types of bacteria. They’ve identified 25,000 proteins that could be involved in the breakdown of wood — I mean, it’s grasses, leafy material, but it has essentially the same cell-wall material as wood.

To me, that’s almost worse than not identifying any — because how do you select from among those 25,000 proteins the ones that might actually be important? Or which ones might be good candidates for a commercial enzyme?

In the case of shipworms, although we found close to 1,000 that could be involved in wood degradation, and were produced by bacteria in the gills, only a relative handful were actually sent to the gut — about 45. So, in a way, the shipworm is telling us which ones are important.

As a later step, Distel said, researchers synthesized the 45 proteins in the lab and tested them to see if they showed the predicted wood-degrading activity. It worked!

Distel’s work is funded in part by the U.S. Department of Energy, and as we spoke it occurred to me how little progress had perhaps been made toward industrial-scale production of cellulosic ethanol since the afternoon in 2002 when I visited the National Renewable Energy Lab outside Denver with a group of journalists.

A pretty good-sized still was on display there, way too big for a laboratory bench but still too small to produce a merchantable volume. We stood around a large vat containing several hundred gallons of intermediate product that looked and smelled dismayingly like Guinness stout, a personal favorite then and now, with undertones of vinegar and molasses, and talked with the scientists and engineers about the seemingly simple hurdles that stood in the way of scaling up their demonstration project.

Mostly we talked about the lignins, the sturdiest and most challenging of the three components, and as I read up this week on recent developments in cellulosic ethanol it seemed to me that the lignin riddle remained key.

I raised this with Distel and he agreed that while much more is now known about the problems of converting complex wood carbohydrates to simple sugars, the outlook for making cellulosic ethanol in industrial quantities has not changed all that much in the last dozen years. And sturdy, enduring lignins remain a key challenge — even to the innards of a shipworm.

“I’ve heard it said that you can make anything you want out of lignin except money,” Distel said with a laugh, and while his enzymes readily consume cellulose and hemicellulose, they leave the lignin undigested (although it’s possible they are modifying it in ways that could prove useful).

“I think any notion that we can expect to find one kind of super-enzyme that can handle the whole process is naive,” he said.

Wood is a complicated material, and different kinds of wood are quite different from one another in how their different components are assembled. But it’s very clever material —extremely strong, very light for its strength, durable.

I liken it to advanced aerospace composite material, in that you can achieve all kinds of different properties by cleverly assembling the different components. But that also means it can be very difficult to take it apart.

And in case you’re trying to envision what kind of ethanol plant would operate by feeding chunks of wood into a brine tank full of hungry shipworms, that’s not how the Distel team’s discovery would play out.

It would be much more efficient, he said, to have the wood digested by whole bacteria cultured outside the shipworm host. Even better, maybe: Synthesize the enzymes and leave the bacteria out of it altogether.

And, he noted, it’s highly possible the critical enzyme-producing genes could be engineered into some other organism entirely, which would leave the shipworms and their internal fauna to go on devouring whatever wooden-hulled ships and unshielded pilings they can still find in this modern world of fiberglass, ferrocement and steel.

Correction: An earlier version of this piece described Distel as lead author of the paper discussed above; in fact, that distinction belongs to Roberta O’Connor of the Division of Geographic Medicine and Infectious Disease at Tufts Medical Center. My apologies to Dr. O’Connor for this error.

Her paper was published last week in the Proceedings of the National Academy of Sciences, available when I read it only to subscribers or on a pay-per-view basis. In addition, a very engaging video of a presentation that Distel made on the shipworms work in 2011 is available via YouTube.