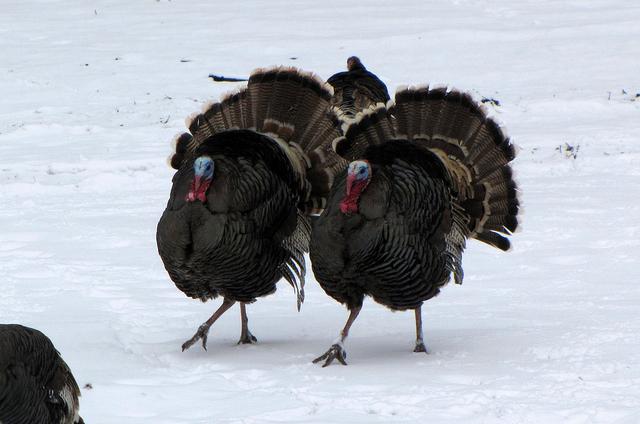 Did you know that wild hen turkeys leave spiral-shaped droppings, while the gobblers’ deposits take the form of a tall “J”?

I didn’t until last week, when the first toms appeared among the leafless trees behind the house, prompting me to resume a sporadic inquiry into the lives and habits of these beautiful, weird and increasingly ubiquitous birds.

After Tuesday’s fresh snow, and armed with this new knowledge, I went looking amid the signature tracks where they had approached the house to pick through spillage from the seed feeders, gifts from the goldfinches and nuthatches.

No poops at all, though, and come to think of it, I don’t think I’ve ever spotted any in the general mayhem they make as they scratch around beneath the feeders and remove the garden mulch in a search for acorns.

Like bears, I suppose, they do that in the woods.

The birds themselves are easy to sex at any distance once they’re full-grown. The toms are massive, rounder, darker, and they stride officiously, with deliberate steps and much fanning of the tail feathers, herding the smaller, lighter females this way and that.

They remind me of abbots, or palace guards, and when they come to the windows of my study now they are no longer intimidated by the human who comes to the glass for a closer look, nearly nose to beak.

I remember well the first bald eagle I ever saw, up close, that wasn’t in captivity. It was an afternoon 1998 and I was following the freeway west across Montana, doing a little less than 100, mindful of the Open Range signs and keep an eye peeled for cattle ahead.

Our national symbol lifted off a mess of roadkill at the right-hand edge of the pavement with a skriek that I could hear over the Jeep’s engine and the tires. A spreading shadow, flashes of white and yellow resolving into head and tail, talons and beak, aloft and then gone.

But I can’t seem to recall the first wild turkey I encountered, and from listening to others I’ve concluded this is typical. With eagles it’s the first sighting that’s unforgettable; with turkeys it’s often the last, perhaps because it happened in an unexpected place: an inner-city backyard, a freeway median, the fringe of a shopping center’s parking lot.

They are everywhere now, and the American wild turkey’s recovery to these abundant numbers is every bit as impressive as the eagle’s, though their stories are very different. The turkey’s, of course, owes much to its status as a prized game bird and centerpiece for American feasting, and its flexibility as to habitat.

Turkeys never came as close to extirpation as bald eagles, but overhunting pushed their numbers below 30,000 early in the last century, and to zero in as many as 18 states, including Minnesota. (According to The Wild Turkey Zone, a hunting-oriented site, Minnesota had no wild turkey population as late as 1969; my home state of Indiana had a comparatively robust cohort of 1,300 back then, and 75,000 by 1999, of which I still have seen exactly zero.)

Too robust a recovery?

Today their numbers are north of 7 million nationally (30,000 in Minnesota), thanks to reintroduction and protection efforts aimed largely at restoring opportunities to shoot them. In some parts of the country, especially in the southeast, it’s possible the efforts were a little too successful, according to an Audubon Magazine article:

In Mississippi, wild turkey numbers peaked at about 410,000 in the late 1980s, and have since declined to a current population of 270,000. In Georgia, 400,000 turkeys prowled pine flats and hardwood ridges in the mid-1990s; during the next decade that number fell by a quarter. Although numbers have since rebounded, the 2010 estimate, the latest available, pegs the Georgia population at 335,000. Arkansas turkey populations may have fallen as much as 65 percent since 2003. Missouri’s statewide turkey flock has shrunk by 30 percent in 10 years, with some regions of the state losing half their birds. …

A host of potential problems are under discussion. Some of the hardest-hit states, such as Arkansas, have endured a succession of cool, wet springs, which fuels concern about the “wet hen hypothesis.” Damp air and soggy feathers create ideal scenting conditions for predators, which might then find nesting hens more easily. Many biologists point to an increase in mid-sized predators such as raccoons in the wake of the collapse of the trapping industry. The relatively recent arrival of a new predator, the coyote, to parts of the South has raised a flag. So, too, has the expansion of fire ants and feral hogs. No one knows just how much of an impact, if any, these things might have on wild turkey populations.

Some theorize that the declines may not be as bad as feared; decreasing population numbers could be a natural response to the reintroductions. In other words, in many areas, wild turkey numbers may have reached an equilibrium after years of rapid growth.

They can swim, too

Did you know that turkeys can swim? The Cornell Lab says they can, “when they need to … by tucking their wings in close, spreading their tails, and kicking.”

Love to see that.

Did you know that a hen may lay as many as 20 eggs each spring, and that in winter, turkeys may roost in groups of more than 200 birds?

I found these numbers impressive even though our backyard crew has been well into  the mid-20s for the last couple of winters, a level that can approach annoyance when the truculent toms decide to bang on the windows or tear down a suet feeder.

But such problems are minor compared to what some folks in Massachusetts are enduring, if these excerpts from a report in the Brookline Patch can be believed:

There have been more reports of turkeys attacking people in town in recent weeks—continuing what has become a semiannual tradition. WHDH reported turkeys have attacked a group of students, a crossing guard, and residents across town.

Police receive calls about aggressive turkeys every few weeks. The birds have been known to charge at people and try to claw their faces. State wildlife officials say people should act aggressively if confronted by a turkey and make loud noises or swat at the animal with a broom.

That level of conflict may be exceptional, but problems with nuisance turkeys have become sufficiently common that the Humane Society of the United States has put out a pamphlet of advice on how to repel the troublemakers — but in a nice way, no guns.

And it’s interesting to see that what really seems to put the fear of winged mayhem into people is simply the sight of turkeys gathered in numbers above, like, 10. Not unlike the fear factor with gaggles of teen-agers at the Mall of America, I suppose.

But so far, the turkeys of Skunk Hollow still scatter as soon as I open a door.

Come to think of it, so did a much larger massing that Sallie and I encountered one October morning in the Black Hills as we went out to our car. There were 40 or maybe even 50 of them in the parking lot of the State Game Lodge, apparently unable to read the sign.

Wild birds off the table

There will be a turkey on our table tomorrow and it won’t be one of these black-and-bronze majesties, not yet.

It will be a standard factory bird, as unlike a natural turkey as a Gold’n Plump fryer is unlike a ring-necked pheasant or a sage grouse, selectively bred and born and slaughtered for the purpose in conditions I would rather not think about too much.

For gastronomic, not ethical, reasons I still look forward to the day when I sample one of our wild visitors, savoring the culmination of  personal effort involving shotshells, shallots, red wine and a long, low braise.

But Sallie would just as soon I didn’t, which is putting it mildly, and my enthusiasm for the project seems to wane just a bit with each passing year as the turkeys striding in and out of range become more familiar, less exotic; as I learn to reference their peculiar body parts with words like snood and wattle; as I gather more instructional material on what’s required to gut and prepare them, digging out pellets, scalding to remove all those feathers ….

Feathers so lovely that I still collect them from our backyard trails and sometimes fashion one of the best into a quill pen, which holds and dispenses ink just as effectively as a goose quill and, thanks to its smaller size, does not poke me in the eye as I write.

Letter from Skunk Hollow: Wild turkeys strut their stuff, back from near obliteration