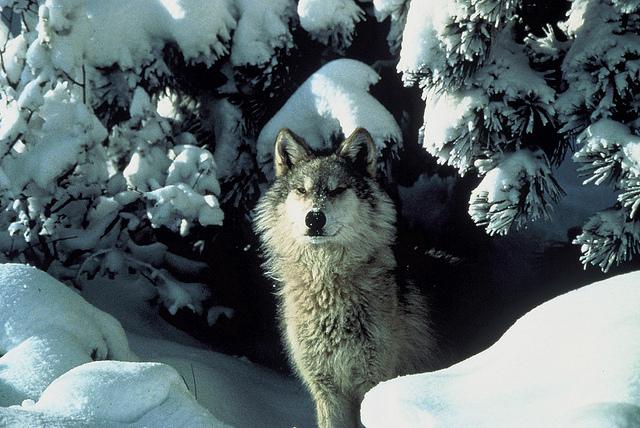 CC/Flickr/USFWS – Pacific Region
The data can’t demonstrate why the killing of wolves has this unintended effect on livestock loss rates, but the researchers offer some hypothetical explanations and they are not exactly new.

What if shooting and trapping wolves actually increase livestock losses in wolf territory, instead of reducing them?

As Minnesota closes the books on a third year of sport trapping and shooting of gray wolves – along  with legal preventive killing by landowners to protect livestock and pets – a new research paper presents perhaps the strongest evidence yet that as a livestock protection measure, killing wolves may in fact be counterproductive.

The paper, published earlier this month in the online journal PLOS One, is the work of researchers at Washington State University, and was funded by the state’s equivalent of Minnesota’s Department of Natural Resources. From the university’s announcement:

Their study is the largest of its kind, analyzing 25 years of lethal control data from U.S. Fish and Wildlife Service’s Interagency Annual Wolf Reports in Montana, Wyoming and Idaho. The researchers found that killing one wolf increases the odds of depredations 4 percent for sheep and 5 to 6 percent for cattle. If 20 wolves are killed, livestock deaths double.

Although the work has received significant attention in such publications as Smithsonian magazine, where I spotted it over the weekend, and The New York Times, it appears to have gone essentially unmentioned in Twin Cities media (except for the Strib’s online-only pickup of a brief AP report).

Of course, the data can’t demonstrate why the killing of wolves has this unintended effect on livestock loss rates, but the researchers offer some hypothetical explanations and they are not exactly new.

The leading possibility seems to be that when a wolf pack’s alpha male or alpha female is removed, so is an important control over breeding behavior among other pack members. Not only does this create more mouths to feed, it constrains the new parents’ hunting to a smaller area, close to their den.

And if that area overlaps with livestock operations, there’s gonna be trouble.

Killing an alpha member, he said, is “like killing the schoolteacher, the animals that keep everyone else in line. You’ve got no brakes anymore.”

However, the study also found that if killing rises to, say, about a quarter of the wolf population, a sort of turning point is reached:

After mortality exceeded 25%, the total number of breeding pairs, wolves, and livestock depredations declined. However, mortality rates exceeding 25% are unsustainable over the long term.

Lethal control of individual depredating wolves may sometimes necessary to stop depredations in the near-term, but we recommend that non-lethal alternatives also be considered.

Livestock protection has long been used as one justification for the resumption of legalized wolf killing in Minnesota three years ago, after federal protections were lifted.

But its efficacy is still under challenge by groups advocating for expanded use of non-lethal controls.

At a legislative hearing last winter, for example, DNR officials acknowledged that they lacked good data to document any clear trends in how livestock depredation might be changing in the short period since sport hunting and trapping were authorized. And some of the figures they did present were sharply challenged.

Among the most compelling witnesses that day was Adrian Treves, a large carnivore specialist at the University of Wisconsin, who has advocated for intensively focusing all wolf hunting and trapping – whether by sportsmen, landowners or government agents – on areas where wolves are actually killing lots of livestock.

More than half of  Wisconsin’s livestock losses to wolves have occurred on just 7 percent of its land, he said, and if officials used some tools he had developed with colleagues, they could predict the locations of such activity with 91 percent accuracy.

But he conceded that there was little hard evidence on the efficacy of lethal controls, no matter how narrowly and professionally they were applied, let alone the value of hunting and trapping for trophies.

He said the best work up to that point had been done in Minnesota by Elizabeth Harper, now at the DNR. Harper’s work was also cited in Wielgus paper, so I thought I’d look it up.

Published in 2008 in the Journal of Wildlife Management, the paper reported on Harper’s analysis of 20 years of data on wolf depradation and trapping compiled by federal officials from 1979 through 1998.

In general, it found that targeted trapping in response to sheep kills “is generally effective in reducing further losses,” explaining that

Sheep are more vulnerable to wolf depredation than are cattle, because sheep usually ﬂock and are defenseless against wolves, so wolves may continue to return for sheep, whereas cattle depredations may be more single-event opportunities.

And that’s just one element of a very different story for cattle:

A possible explanation for the positive relationship between number of wolves killed and higher depredations was that farms where more wolves were captured may have been farms where more wolves lived. A second possibility is that any wolves remaining after trapping had learned to prey on livestock, possibly becoming more dependent on livestock once pack mates have been removed.

For all analyses, trapping but catching no wolves led to lower recurrence than not trapping at all,  which suggests that the mere increase in human activity and the introduction of foreign odor and objects at a depredation site might have been enough to reduce future depredations.

Conceivably, then, any apparent decreases in depredation from killing wolves may actually have been due to increased human activity…. Human activity may also at least partly explain the effectiveness of ﬂadry (plastic ﬂagging hanging on fencing surrounding farms) as a barrier to wolf depredations.

And the killing continues apace

For the third year in a row, Minnesota hunters and trappers exceeded predictions of their prowess by killing more wolves than the targets set by the DNR, and at a much brisker clip. A season that was to extend from Nov. 29 to Jan. 31 ended last Friday in the last open zone; one zone had been open just seven days. In all, hunters and trappers reported taking 22 wolves more than the DNR’s late season target of 126, part of an overall target of 250; of the 148 taken in the late season, 24 were shot and 124 were trapped. [These figures have been updated since the initial post.]

In Wisconsin, where the seasons were to run as late as Feb. 28, all zones were closed as of Dec. 5 with hunters and trappers reporting that 154 wolves had been taken, four more than the DNR’s target. Eighty percent were taken in traps, 20 percent by shooting. (Six were shot by hunters using dogs to improve their chances, in the only state that allows the practice.)

In Michigan, where hunters killed 23 wolves last year against a target of 43, voters were actually allowed to have their say on wolf management in the November elections – and roundly rejected trophy hunting. The DNR then canceled the 2014 hunt; whether there will be one in 2015 and beyond is up to the courts, which are considering various legislative and administrative efforts to ignore the will of the people.  Landowners are still permitted to kill wolves that threaten livestock.

Meanwhile, in Wyoming, federal protections have been temporarily restored to wolves, after a court overturned a state management plan that allowed wolves to be shot on sight almost everywhere as a preventive measure to keep them from preying on livestock. Trophy hunting, never permitted under federal rules, was also allowed but only in a small area around Yellowstone National Park.