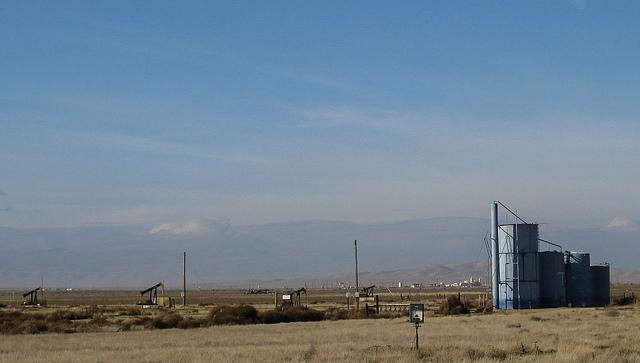 There are roughly 3 million spent oil wells around the United States, and for what appears rather amazingly to be the very first time, someone has tried to answer an important and obvious question:

How much methane is leaking into the atmosphere from these abandoned production sites?

The answer is potentially quite a lot, according to a paper published this week by the National Academy of Sciences — somewhere between 4 percent and 7 percent of all human-caused methane releases in the study area, which would include agriculture and landfills.

Because this source has been overlooked, none of that methane is counted in the nation’s official inventories of greenhouse gas emissions, which are supposed to serve as a foundation for effective policy-making.

This matters, of course, because atmospheric methane’s heat-trapping capabilities are more than 25 times greater than carbon dioxide’s (although it is shorter-lived). It contributes to other pollution and public-health problems as well, including ground-level ozone formation.

You may be wondering how such an oversight can happen, since it’s certainly no secret that methane comes to the surface with oil and natural gas. In fact, it’s the primary component of natural gas, and considerable attention has focused on issues around producers’ wasteful “flaring” of gas they find inconvenient to process and sell.

But as Mary Kang told phys.org, she went looking for information on the subject while finishing up a doctorate at Princeton, and came up empty. So she picked a corner of northwest Pennsylvania that had plenty of dead wells and went to work on a sample in McKean and Potter counties.

As it happens, I retain vivid childhood memories of McKean County’s plentiful oil wells, which fascinated me because they looked to my grade-school eyes like so many robotic dinosaurs.

My mother was from Bradford, and when we went back to visit we’d follow mile after mile of country roads — and city streets, too — where it seemed that every yard had one or two pickup-sized  black pumps, some seesawing like ground-feeding insects and some already silent.

These devices made northwest Pennsylvania an oil-rich boom territory for a while (think Kendall, Pennzoil, Quaker State) and then they went dry.

Kang had no trouble gaining legal access to 19 of them, five of which were listed as having been “plugged” with a concrete cap, but only one of which was on the state’s official roster of abandoned and orphaned wells.

Although Kang concedes that there is no way of knowing whether these 19 are representative of all wells across Pennsylvania, neither is there any reason to assume they are not.

Moreover, the rates of methane leakage from these wells were fairly close to the measured leakage rates at active wells producing natural gas, on the order of one-half of 1 percent of production.

A half-century of overlooked venting

Drawing on various sources, Kang estimates that Pennsylvania today is home to somewhere between 300,000 and 500,000 abandoned and orphaned wells (the latter being abandoned wells for whom no owner or other responsible party is known).  Moreover,

The measured wells presented in this paper are likely to be half a century old or older, and the positive flow rates measured at these wells indicate that the methane emissions from these wells may have been occurring for many decades and possibly more than a century. Therefore, the cumulative emissions from abandoned wells may be significantly larger than the cumulative leakage associated with oil and gas production, which has a shorter lifetime of operation.

As oil and gas development continues to grow in the United States and abroad, the number of abandoned oil and gas wells will continue to grow. Inclusion of abandoned wells in methane emissions accounting (e.g., GHG emissions inventories) will facilitate an improved understanding of their impact on the environment and the development and implementation of effective mitigation strategies and policies. In addition, the measurements provided here may be useful for characterizing groundwater contamination sources and estimating subsurface accumulations of methane and other fluids.

Speaking of wells still in production, a second study just out this week looks at another source of methane leakage — the intentional venting of natural gas whose flow is used to power certain pneumatic equipment at the wellhead.

Pneumatic controllers use gas pressure to control the operation of mechanical devices, such as valves. The valves, in turn, control process conditions such as levels, temperatures, and pressures. When a pneumatic controller identifies the need to change liquid level, pressure, temperature or ﬂow, it will open or close a control valve in order to return to a desired set point.

In the process, some gas is released, and the volume of those releases is accounted for in industry estimates of methane leakage and in the national greenhouse-gas inventories prepared by the U.S. Environmental Protection Agency.

But according to this paper, published in Environmental Science & Technology, actual emissions are significantly higher than the official figures — suggesting both a problem to be solved and an opportunity to capture more of the gas that’s going to waste. And the lead author, David T. Allen of the University of Texas, ought to know; he’s on an EPA advisory panel that deals with these questions.

Until now, Allen writes, most estimates of methane leakage from gas and oil operations have been “top-down” — derived from ambient air monitoring, satellite measurements, and so on. Less extensively developed are “bottom-up” methods that measure actual equipment and process leakage and extrapolate the results to larger scales.

Kang’s work on abandoned wells is a good example of a bottom-up approach, and Allen’s new work on the pneumatic controllers is another.

The EPA counts these devices, and Allen’s paper puts the current figure it 477,606 nationwide. Altogether, they are estimated to vent 17.4 billion cubic feet of methane per year. (The average U.S. household uses a little under 200 cubic feet of gas per day, a little over 70,000 cubic feet per year.)

Allen’s purpose in this new research was to figure out if that estimate seems to be accurate, and also to identify ways in which the emissions might be reduced. His work had support from a few oil companies as well as from the environmentalist community, in the form of the Environmental Defense Fund.

Oil company support eased his access to 377 pneumatic controllers and 65 production sites around the country, which in turn enabled to important findings:

And these findings matter, too, because they complicate the notion that increased reliance on natural gas is necessarily a great leap forward environmentally from, say, coal:

Natural gas may have a lower greenhouse gas footprint than other, more carbon intensive, fossil fuels (coal and petroleum), since the carbon dioxide emissions associated with natural gas combustion are less than those associated with the combustion of coal and petroleum. For example, for identical heat releases on combustion, natural gas generates less than half of the carbon dioxide emissions of a typical coal.