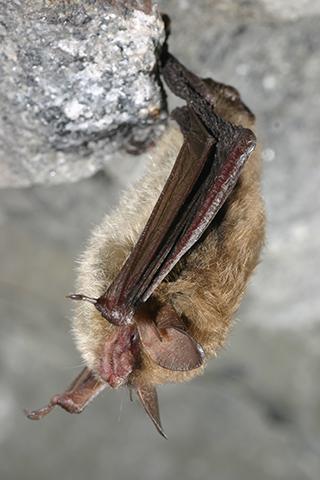 According to Tony Sullins of the U.S. Fish and Wildlife Service, proposals to extend Endangered Species Act protections to the northern long-eared bat may have generated more public input than the issues around gray wolves  — or any others he has worked on in his more than 20 years with FWS.

Sullins is the service’s endangered species chief for the Midwest region, and also FWS’s lead manager nationally on the proposed listing of the northern long-eared bat as a threatened or endangered species, because of the devastation visited on millions of bats since white-nose syndrome emerged in the winter of 2006-2007.

Though there’s considerable technical difference between those two designations, either would invoke habitat protections that would almost certainly restrict logging to some degree. Thus the opposition of Minnesota and most, if not all, of the 37 other states in the bat’s range to having it receive endangered status (see correction at end).

Sullins was in St. Paul Wednesday to speak at a University of Minnesota policy seminar on the role of science in shaping decisions on species protection, and what we’ve learned as a society since the firestorm over protecting the northern spotted owl by restricting logging in the Pacific Northwest.

The second question was the easier to answer: A quarter-century of experience has led to a whole range of procedural changes that emphasize consultation and stakeholder participation.

But the subject of science-based decisionmaking was considerably thornier, not least because so little is yet known about the intersection of forest management and the health of bat populations, let alone how modified practices could aggravate or ameliorate losses to the fungal plague that is bringing catastrophic collapse to bat populations all over the U.S.

Thus a public-comment volume of more than 40,000 submissions even before FWS’ most recent extension of the comment period, which has added many thousands more, and will continue to grow until the next deadline, Dec. 18.

Joining Sullins on yesterday’s panel were:

Here are some excerpts from each panelist’s comments that struck me as not only representative but particularly provocative, insightful or otherwise interesting:

Although it’s well understood how the northern long-eared bat rears its young — each spring, the females give birth to one pup apiece, and nurture them in “maternity trees” during a flightless period of about six weeks — much less is known about their requirements at a landscape scale.

Until the emergence of white-nose syndrome, standard logging practices are not thought to have caused any problems for bats at all, Sullins said. But a disease that can cause 99 percent mortality over the winter in a bat hibernaculum changes everything.

In a reduced population, reduced by 99 percent, if you cut down a maternity tree that has several females with pups in it, what is the impact of that on that local population? Is that more meaningful now? That is a question that we’re studying and debating. We don’t have the answers yet.

Whatever the eventual answer, Sullins said, any restrictions would deal with the “taking” — that is, killing — of protected bats, rather than a prohibition against logging per se. But whether that might prove to be a distinction without a practical difference remains difficult to predict.

Although it remains unclear what shape any ESA-driven restrictions on logging might take, Boe said the DNR’s opinion is that any restrictions are likely to be problematic, even if they only apply to a period of several weeks or a couple of months in summer.

Commercial logging is the only tool the DNR has to manage forest health and fund its forestry program, he said, and “we can’t manage every forest species, for every benefit, on every single acre.”

The DNR, he said, manages 5 million acres of forestland statewide, while 17 million acres is under the control of local governments or private owners.

The mills buy the wood from the loggers, the loggers buy stumpage from the state or the counties, and the state gets our forest management work done by the loggers. … The potential for constraints on summer logging, that specifically exist in this case [would interfere] with projects that create seed beds for native tree species that really need that disturbance, that you can’t regenerate at other times in other ways. And we can only get that disturbance done in the summertime.

Watson said her association and its members regard even the interim guidance from FWS about minimizing impacts on nesting bats to be disturbingly aggressive, including what she described as the threat of steep fines and even jail time for activities found to have killed a few bats.

We were surprised by the really very narrow harvesting windows and broad restrictions on very useful tools like prescribed burning and herbicides. In addition, if you look at the proposed listing itself, it sort of frames forest management as a tool for habitat destruction.

There are a growing number of threatened and endangered species on private lands, and this is a good chance for wildlife agencies and professional foresters to really see how they can harvest the landowners’ sense of stewardship and proud tradition of conservation.

Perhaps rebutting Watson’s image of loggers in leg irons for accidentally evicting a mother bat and pup from their tree, Lewis clarified that criminal penalties are rarely if ever imposed under the ESA, and that as a matter of policy the Justice Department won’t prosecute unless the taking of a protected animal or plant clearly involves criminal intent.

While the three comment periods since October 2013 have been lengthy, and extended beyond their original time frames, she pointed out that the process is in no way a plebiscite on the eventual policy, and that while the aim is to develop a better information basis for the final rules, the process cannot be indefinite.

At the Fish and Wildlife Service we think of ourselves first and foremost as a scientific organization, and we take our charge from Congress very seriously. We really value the rigor of science and our decisions, we think, are based on the best information that we can find.

Many species that we’re asked to make a listing decision on don’t have a great deal known about them, and it may look like we’re making a decision on scanty information. However, we don’t have the luxury in this case, because we have a court-ordered deadline — or in other cases because we just don’t have the funding or time available — to just postpone our decision for more research.

Boe pointed out that while the fungus that causes white-nose syndrome — though not the disease itself — had been found in places in Minnesota in 2012, it had not been found there since.

And Sullins said a few encouraging signs had begun to emerge nationally:

There are rays of hope in New England, in the hard-hit areas, and there’s a remnant population on Long Island that seems to be healthy, with no mortality that’s known. There’s some suggestion in West Virginia that the bat may be doing better in some places. In Pennsylvania there are places where the mortality loss is only 75 percent, which is still a very significant loss, and we’re trying to analyze what this means, but these are hopeful signs.

Yesterday’s presentation was part of the R.A. Skok Policy Analysis Seminar Series, and the university has posted a video of the full 90-minute panel discussion, with audience questions and answers, here.

In addition, here are links to some interesting documents that were posted during the session, thanks to the efforts of Eli Sagor, a faculty member who teaches at the Cloquet Forestry center who shared them with webinar participants via chat window even as the presentations were taking place:

This post originally said, somewhat simplistically, that Minnesota opposes ESA protection for bats. Rich Baker, endangered species coordinator for the DNR, called to point out that the DNR opposes a listing of the species as “endangered,” but not a listing as “threatened.”

The distinction is somewhat technical but it is not trivial, and I wish I had been clearer on this point.

However, it is also clear from the DNR panelist’s comments, and the department’s letter [PDF] to the U.S. Fish and Wildlife Service, that the department is indeed opposed to the summertime logging restrictions that all seem to agree would be a primary consequence of either designation, and that were a primary focus of both the panel discussion and my post.