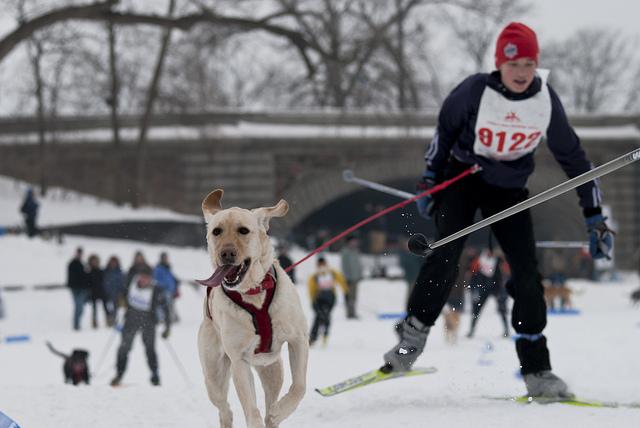 CC/Flickr/Patricia Cich Lee
Average winter temperatures in the upper Midwest are likely to climb to levels that place serious constraints on winter sports.

If mid-January’s unseasonal cruddiness has got you down – it being too cold and dreary to enjoy a hike, too warm and snowless for cross-country skis – the Risky Business Project has a message for you:

Get used to it.

Assuming the earth’s warming trends continue on their current trajectory, Risky Business says in a new analysis being unveiled today in downtown Minneapolis, average winter temperatures in the upper Midwest are likely to climb to levels that place serious constraints on winter sports.

And it isn’t only skiers, snowshoers and snowmobilers who will feel the squeeze. So will an estimated 35,000 people with jobs in winter tourism:

Winter sports are serious business in this region. The Midwest is home to almost one-fifth of the nation’s ski areas. Minnesota, Michigan, and Wisconsin lead other states in snowmobile registrations, with a combined total of almost 732,000. The ski and snowmobile industries combined are worth an estimated $2.4 billion in value added to the overall region’s economy. Snowmobiling and cross-country skiing are more vulnerable than downhill skiing to temperature changes since they rely solely on natural snowfall, rather than snowmaking equipment.

The hockey industry is watching these looming climate risks with concern. A 2012 study found that the length of the Canadian skating season at outdoor rinks had decreased by 20-30% over the past five decades due to changing climatic conditions, presenting a serious challenge to an industry dependent on early player training on frozen ponds, lakes, and groomed outdoor rinks.

In 2014, the NHL voiced its concern over the impacts of climate change and water scarcity on the future of hockey in North America and detailed its actions to help slow these effects in a first-of-its-kind report. “The ability to skate and play hockey outdoors is a critical component of the league’s history and culture. Many of the NHL’s players, both past and present, learned to skate outside on frozen lakes, ponds and backyard rinks. The game of hockey is adversely affected if this opportunity becomes unavailable to future generations.”

Warmer temperatures can also reduce the length of the ice-cover season, which is critical for ice-fishing. For example, researchers at the University of Wisconsin found that the average number of days that Lakes Monona and Mendota in Madison are frozen has decreased by approximately one month over the past 150 years.

I’ve excerpted the findings on these points at some length because I think they frame so clearly the probable wintertime impacts of current climate shifts on our culture, our commerce and, some might say, our regional character; usually, it’s the summertime plagues of heat waves and drought that get the most attention.

Also, because they address so directly the idiotic chatter you still hear these days, suggesting that a little global warming wouldn’t be such a bad thing up here on the tundra.

Does the report consider that such a complete reshaping of the winter recreation landscape might have some upside? You betcha:

On the other hand, warmer temperatures could expand the use of ski areas for outdoor activities during the spring, summer and fall, such as mountain biking and hiking, and could present new business opportunities for these areas if owners are able to make the equipment and expertise adaptations necessary to completely alter business practices.

I’ve added emphasis there for two reasons: First, because it underscores the point that the supposed potential benefits of a warming climate in this region still carry a significant price tag for the responses necessary to seize those advantages.

Second, because the Risky Business Project’s work differs from some other forecasts in its emphasis on economic impacts that it feels are worthy of here-and-now attention from American businesses, their executives and their shareholders.

That’s why today’s report is being unveiled at a luncheon meeting sponsored by the Economic Club of Minnesota, with former Treasury Secretary Hank Paulson and current Cargill Executive Chair of the Board Greg Page as the principal presenters. (You can watch it live online here starting at noon CST.)

The project’s first analysis was published last June; it looked at probable climate impacts across the United States. Today’s followup is one in a series of regional or state-level closeups, and focuses on a midwestern zone consisting of Minnesota, Wisconsin, Michigan, Iowa, Illinois, Indiana, Ohio and Missouri.

In a twist on other approaches for distinguishing between the most likely impacts and lesser but still troubling prospects, Risky Business makes it a point to calculate many risks on two scales: “Likely” scenarios, which have at least a two-thirds chance of occurrence in a given time frame, and what investment strategists called “tail risks,”  which have only a 1-in-20 chance of happening, but carry such catastrophic downsides that they cannot prudently be ignored.

It’s the latter principle that motivates us to buy fire insurance on our homes, but pass up the extended warranty on a toaster.

In general, I think it’s fair to say that Risky Business’s projected climate impacts across the lower Midwest are likely to be significantly harsher and more costly than those at our latitudes. That may be of some comfort, I suppose, to those who figure we’re all in this alone.

Among the notable, Minnesota-specific points in the new analysis:

For example, Minnesota will see a likely increase of up to 17 percent in soybean yields by 2040-2059, with a one-in-20 chance of an 8 percent decrease. However, our research did not take into account possible negative byproducts of warmer winters, such as the potential for some insect species to live through the winter. Warmer winters will also extend the geographic distribution of weeds northward, exposing farms in northern latitudes to new or enhanced threats to productivity. … Moreover, many invasive species, both plant and insect, may actually benefit more than crops from the increased CO2 and temperatures brought about by climate change.

The full report on projected Midwestern impacts can be found here, and the Risky Business Project’s home page is here.