One of Alaska’s senators calls it an Obama administration attack on her state’s sovereignty and economy, even an effort to roll back statehood and restore territorial status.

The other senator calls it an example of President Barack Obama’s continuing war on Alaskan families, aimed at turning the nation’s largest state into its largest national park.

Alaska’s lone congressman calls it a brazen and illegal act, “akin to spitting in our faces and telling us it’s raining outside.”

Well, OK, they’re Republicans. But in Alaska, even the Democrats won’t stand with the president on this one. They joined the fray with a statement blaming it all on the voters for electing a fully GOP  congressional delegation, suggesting that if Democrat Mark Begich had held onto his Senate seat last November, a “firewall” would have stayed in place to protect Alaskan lands from presidential poaching.

From all of this blather, and some unfortunately cursory coverage of Sunday’s White House announcement on the Arctic National Wildlife Refuge, you might think that some major shift was occurring in protection of this portion of Alaska’s North Slope.

But it simply isn’t so.

Or, on the other hand, you might be thinking: New protections for ANWR? Didn’t we preserve it all as wilderness already?

Some wilderness, some not

Despite the sound and the fury, and headlines like USA Today’s “Obama seeks to put Alaska refuge off-limits to drilling,” Sunday’s White House announcement quite likely signals no meaningful change in the outlook for either oil production or wilderness protection in ANWR. Here’s why:

Though many in the lower 48 tend to think of the refuge as one entity, its 19.6 million acres comprise several distinct units covering mountains, river valleys and a vast coastal plain, which is where the oil is.

Its history of protections, like that of the Boundary Waters Canoe Area, stretches back before enactment of such modern laws as the Wilderness Act of 1964, which created the federal wilderness protection system as an overlay on national parks and national forests and other protected places, let alone the Alaska National Interest Lands Conservation Act of 1980, which gave the refuge its present size and shape. 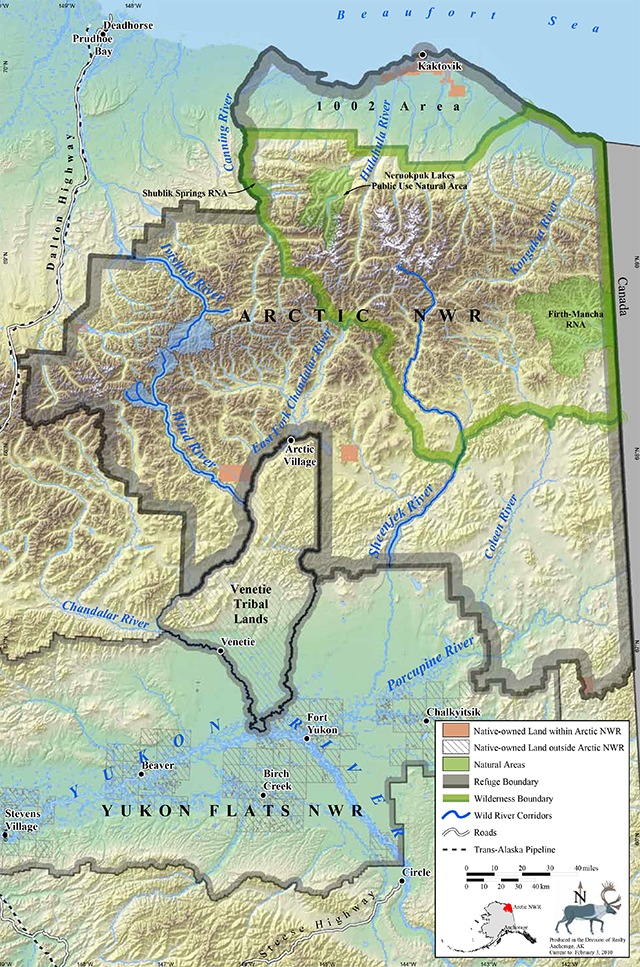 U.S. Fish & Wildlife Service
Though many in the lower 48 tend to think of the refuge as one entity, its 19.6 million acres comprise several distinct units covering mountains, river valleys and a vast coastal plain, which is where the oil is. Click for larger map.

Indeed, the first federal protections in what is now ANWR were established in 1960 – a year after Alaskan statehood – by President Dwight D. Eisenhower and Interior Secretary Fred Seaton.

Their 8.9-million-acre Arctic Range in Alaska’s northeast corner, up against the Yukon border, ran from the Brooks Range across the coastal plain to the edge of the Beaufort Sea. Its purpose was preservation of “unique wildlife, wilderness and recreation values.” No oil and gas wells allowed.

The oil reserve, too, included a vast swath of coastal plain – territory that some scientists and advocates, even today, will say is more ecologically significant and precious than the ANWR lands, especially for migratory birds who summer in the Arctic.

And less than a decade later, in 1968, came the discovery of the continent’s largest oilfield at Prudhoe Bay – on the Arctic coast and smack between the two federal reserves, also on state-controlled lands.

That began an oil boom that has waxed and waned over time, the only constant being the protest of Alaskan politicians and oil companies that no matter how much North Slope territory is made available for drilling – federal or state, coastal plain or offshore – it ain’t enough.

The 1980 law now universally referenced as ANILCA brought a sweeping settlement of most conflicts over federal and tribal lands in Alaska that statehood had not resolved. Most, but not all.

ANILCA expanded the Arctic Range into ANWR, doubling its size, and banning oil and gas development throughout the refuge without specific congressional authorization. But the fate of one critical slice – 1.5 million acres of coastal plain – was kicked down the road.

According to the U.S. Fish and Wildlife Service’s official refuge history, compromise proved impossible between a House position favoring wilderness designation and a Senate stance in favor of further study, on which findings a decision between wilderness protection and oil development might be made.

And so ANILCA’s Section 1002 gave us what is now know as the 1002 Area (pronounced “ten-oh-two”), a strip of beautiful, desolate, unspoiled, oil-rich coastal tundra which both sides regard as a check that’s due them, and one they can’t cash.

Going to the coast

I went there once to learn about the place, and the issues, and to experience firsthand a few days of life on the Arctic Coast, right where the Turner River runs into the salt. This was in the northeast corner of the old Arctic Range, of the contemporary Arctic Refuge, and of the entire state of Alaska.

Looking one way, I could see pack ice and leads of seawater that would stretch to the North Pole. Turning 180 degrees around, I could gaze across the golden velvet of the tussocks and knee-high willows and wildflowers that carpet the coastal plain, stretching here only a short ways to the palisade of the Brooks Range, walling off the rest of my country, which now lay entirely to my south.

Day after day I experienced the deepest and most perfect quietude I have ever known, interrupted occasionally and strangely by a chatter of faint, distant voices.

I mentioned this later to an Inupiat man from Kaktovik, on Barter Island, and he told me that his people hear voices in the refuge, too, and believe there are “little people” alive in the tundra, gossiping about the big people and sometimes offering advice.  “Were they speaking English?” he wanted to know.

Well, yes, mostly, although the words were indistinct, and I feel now that the likeliest explanation is that some part of my psyche struggled to supply a sense of home as I adjusted to being so very far away, in an utterly unchanging environment of 24-hour daylight, 40 degrees or so, the occasional light breeze … and that otherwise flawless silence.

Beating the drum for more

Not quite 20 years later, no month passes that I don’t think of the refuge with fondness and a longing to go back. Especially when the Alaskans start beating the battle drums, with Sen. Lisa Murkowski now taking the lead bequeathed to her by her old man:

What’s coming is a stunning attack on our sovereignty and our ability to develop a strong economy that allows us, our children and our grandchildren to thrive. It’s clear this administration does not care about us, and sees us as nothing but a territory.

The promises made to us at statehood, and since then, mean absolutely nothing to them. I cannot understand why this administration is willing to negotiate with Iran, but not Alaska. But we will not be run over like this. We will fight back with every resource at our disposal.

This from a place, remember, where state revenues from oil wells – on both state and federal lands, on the coastal plain and now offshore – provide state residents with a dividend check instead of an income tax bill each year.

Here’s the truth of what the Obama administration is proposing, and the likely result:

( It is quite a common thing, by the way, for areas that are candidates to become wilderness to be managed, in the interim, as if they already were. Why allow a bunch of trammeling in a place you plan and hope to preserve as “untrammeled by man”?)

No one will be surprised if congressional Republicans use Obama’s move as justification to try legislating drilling access to the 1002, but the odds are against them.

The Alaskans’ arguments had more appeal in the lower 48 before the Exxon Valdez spill in 1989; since then, the closest they’ve come to success was a drilling authorization tacked onto budget legislation in 1995, which passed both houses but drew a veto from President Bill Clinton. The veto stood.

Nineteen years on, oil production in other parts of the U.S. has soared, the national security arguments for developing domestic supplies have softened, Americans have come to realize how much of Alaska’s production has gone to export markets.

Finally, world oil prices keep falling, which makes the cost premium of drilling in the North Slope’s challenging climate an even greater disincentive to the oil companies.