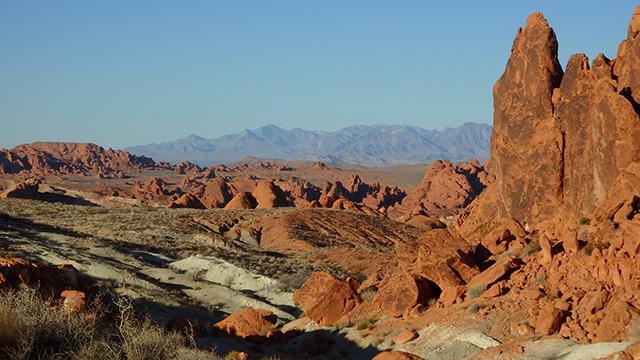 There’s an obvious problem with going to magnificent natural places at the best times of year: You can find yourself waiting in line, wading through crowds, searching in vain for the moments of solitude that led you out there in the first place.

A less obvious advantage of the American Southwest: Its vast reaches of public land hold dozens of astonishing destinations that nine tourists out of 10 will speed past in their hurry to get to Grand Canyon, be it winter, spring, summer or fall.

Finding these out-of-the-way treasures takes more research, but only a little more, and for nominating the three below I am grateful to Rod and Sharon Johnson of Midwest Mountaineering, whose travel talk during the November expo nudged Sallie and me onto this path in the first place.

After picking up your rental car at the Las Vegas airport, you have this clear choice:

The federal Bureau of Land Management, which administers Red Rock, says the park gets a million visitors a year (Grand Canyon gets five times that), but I don’t think we saw more than a few hundred in the course of our day there on Jan. 2. 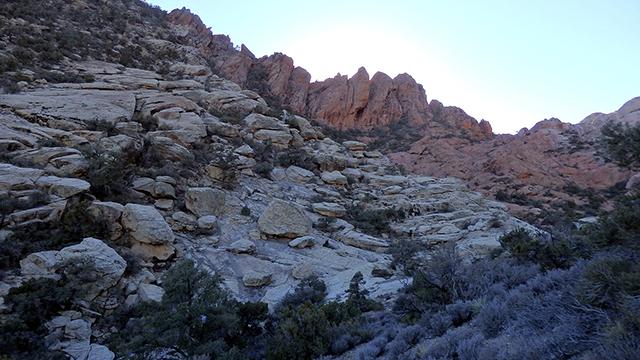 We had the trail very nearly to ourselves on a 7.5-mile day hike in the White Rock area off the end of the park’s scenic drive, climbing and descending in mild temperatures and pale sunshine.

The drive itself offers a 13-mile auto tour of the park’s vistas and is mostly one-way traffic, which takes a little pressure off the gawking driver.

It also takes some pressure off the cyclists who flock to Red Rock on road bikes and mountain bikes alike; this time of year, sharing the road looked like a low-stress proposition. And Red Rock is said to be a prime venue for rock climbers year-round.

Ours was an upland hike over rough ground with significant elevation changes; the trail was easy to follow and introduced us to an impressive array of cactus and agave species, as well as the pinyon pines, cedars and scrub live oaks that turn the cooler, wetter slopes and washes into deep green gardens.

Owing to some misreadings of the park’s highly not-to-scale visitor map, we finished the hike well after sundown, tired and chilled but treated to an unexpected and spectacular view of Las Vegas aglow in the valley below.

(Having now spent a couple of days there, too, I feel that Vegas is a city best viewed from afar.)

About an hour northeast of Las Vegas, just short of Lake Mead, is Nevada’s first state park and we can score this as an excellent start; it went on the list of U.S. National Natural Landmarks shortly after that registry was established in the 1960s.

This is a park to see if you are interested in geology, geologic time scales and the shaping of the intermountain West by volcanic activity, tectonic plate shifts and endless erosion.

I say this as someone who finds the subject of geology to be a closed book bordering on the impenetrable. But I do so envy the ability of geologists to see time in a landscape the way non-geologists can see only space, and Valley of Fire is a great place to try.

The visitor center features an easy-to-follow guide to the rocky vistas beyond its windows and to the historical forces that first laid down the valley’s layers of rock, then flipped them upside down in a series of massive uplifts and fractures. 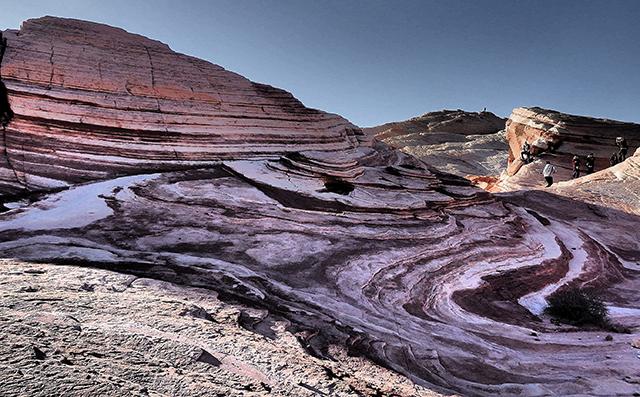 MinnPost photo by Ron Meador
This is a park to see if you are interested in geology, geologic time scales and the shaping of the intermountain West by volcanic activity, tectonic plate shifts and endless erosion.

There is petrified wood here, and petroglyphs made by Indian occupants three millennia ago, but the single most popular feature is a swirling, red-and-white sandstone formation called the Fire Wave.

This is not to be confused with The Wave at Vermillion Cliffs National Monument, over in Arizona, north of Grand Canyon and almost to Lake Powell.

That Wave requires a visitor permit, of which only 20 are issued each day. If you want to see it, you have two options:

On the day we visited the Kanab office, for other purposes, 175 people had turned up before dawn to try their luck, and 165 went away sadder and five bucks lighter (no refunds).

As we browsed in the bookstore, I heard the young ranger answer perhaps a dozen phone calls, each time explaining the lottery process. Because Kanab is also the headquarters for the 1.9-million-acre Grand Staircase-Escalante National Monument, I asked her how often anybody phoned with a question about anything but The Wave. She thought for a moment and said she couldn’t recall the last time.

But over at the Fire Wave, on the day we took our short and gentle walk through another breathtaking patch of desert, we were once again virtually alone.

A ranger-guided tour convoy showed up partway through, but compared to the throngs we’d recently  endured at Grand Canyon, this was trivial. And interesting, actually, in its opportunity to watch others reacting to the swirls of rock, now shifting across the color spectrum as the sunlight began to flatten and fade.

This is my new favorite among the national parks, a true love-at-first-sight experience, and we probably wouldn’t have considered it in any other season.

First, because roads to Grand Canyon’s north rim would have been open, and that side of the canyon has long been on my bucket list. Second, because in any other season, this southern Utah gem is likely to be kind of a mob scene.

Visitation is so high in warmer weather that for 15 years now, the park has closed most of its interior roads to vehicle traffic from April through October; you park your car in Springdale and go in by shuttle bus.

Nevertheless, Zion’s canyon and trails rose from our Maybes list to the Musts on the testimony of a waiter at Grand Canyon’s El Tovar Lodge, who said visiting Zion Canyon was like touring Grand Canyon but from the floor instead of the rim, and in settings and on a scale he termed “intimate.”

It is indeed a stunningly gorgeous place, lying north and uphill from Grand Canyon, its own fine canyon carved by the Virgin River through rock whose lowermost layers of white and red sandstone are a continuation of Grand Canyon’s uppermost strata, if I understood the ranger correctly, which is possible.

Zion in warm weather is a prime destination for backpackers but in the snowy months most of its trails are closed or impassable or both, and what visitors came by last week seemed mostly content to stay in the comfort of their cars or the visitor center. 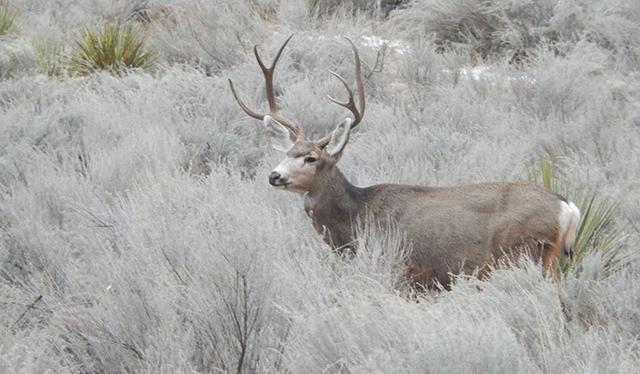 We had a short but lovely walk over paved trail along the river one late afternoon, and the next day took a longer hike on a sandy trail that traces a long and skinny oval between the river and a wall of peaks called the Court of the Patriarchs, climbing into flurries and descending in a substantial snowstorm.

At the top we stumbled onto, almost into, a pair of mule deer bucks utterly untroubled by our close proximity, no more skittish than the does who’d climbed up to graze within a few yards of us earlier in the day, down the canyon.

These would easily have rated as the up-close wildlife sightings of the week if not for the bighorn sheep we saw along the road next day, heading back to Nevada and eventually, reluctantly, to home. 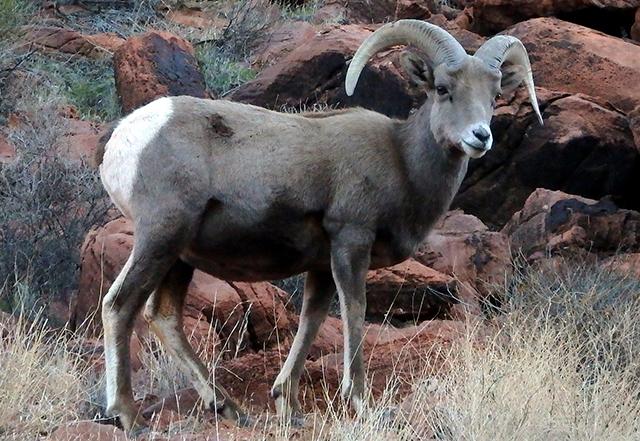 Letter from Nevada: Finding quiet spots amid snowbirds flocking to the desert