Lake Pepin is filling up with sediment. I think everybody knows that by now.

And many have opinions – often self-interested – on how much of this problem is a consequence of unsound agricultural practices, how much from more “natural” sources like riverbank erosion.

But dirt is dirt, isn’t it? How can it ever be traced back to its source, especially when the potential sources are spread across most of the state and even beyond its borders?

A fascinating series of answers to that question was delivered in St. Paul last week by Peter Wilcock, who heads a watershed science department at Utah State University and was brought here by the Freshwater Society and various programs at the University of Minnesota. I didn’t get to see it live – I opted to watch the president’s State of the Union Speech – but yesterday I caught up it with on video.

If you have an interest in any part of this subject, from the fate of Lake Pepin to the need for new methods of soil conservation, to our governor’s fresh pitch for expanded investment in riparian buffers, I urge you to do the same.

Part gee-whiz science and part frank policy discussion, Wilcock’s talk and a panel discussion that followed made these complicated subjects accessible to anyone, and probably held a few bits of news even for specialists in the audience.

The watersheds of the Minnesota, Mississippi and St. Croix rivers all contribute something to the sediment load in Lake Pepin; based on current science, Wilcock assigns the Minnesota’s an 88 percent share.

Partly this is just a function of topography: Most of the watershed is fairly flat terrain, former prairie that was a seabed under glacial Lake Agassiz.

When the great ice sheets melted, about 13,400 years ago, the meltwater carved not only the Minnesota’s remarkably wide valley, compared to the river’s modern size, but unusually steep cuts of up to 60 meters in depth.

This occurred at paces, Wilcock said, that “make the rivers of the Minnesota River basin some of the fastest-incising rivers anywhere in the world.”

At about the same time, sediments deposited by Wisconsin’s Chippewa River were narrowing the Mississippi River near what’s now Reads Landing, backing up the volumes of water that created Lake Pepin.

Pepin is an iconic body of water for many reasons, Wilcock said, but also a temporary one. Sediment loading means it will eventually disappear, not in our lifetimes but at a future point that’s difficult to know.

(I had some brief personal experience with this trend the summer before last, when we tried to maneuver our little sailboat to the town dock at Maiden Rock. We went aground a long way out,  and when Sallie jumped over the side to try walking to shore, she sank to mid-thigh in silt like almond butter.)

What’s easier to know is that the arrival date’s approach is accelerating, because the rate of sedimentation has been accelerating over the last 150 years, and especially since the late 1940s. And clearly the primary driver is agricultural practices that have made row crops the dominant land use throughout the basin.

Within agriculture’s contribution, most recently, is the impact of never-ending expansion of drainage tiling to remove any unwanted water from the soil, whether deposited by normal rainfall or flooding or even irrigation.

At Lake Pepin, Wilcock said, the impact can be gauged with sediment cores that show stable sedimentation rates for at least 300 years prior to the middle 1800s, then rising steadily through World War II. At that point, he added, they “max out and remain fairly steady until today.” 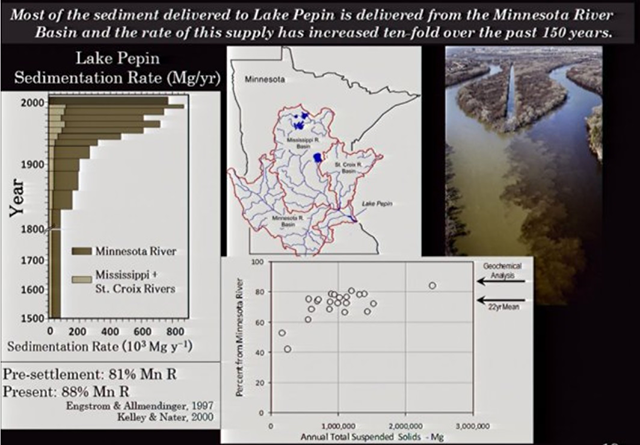 Before the 1940s, soil erosion of the topsoil type we associate with Dust Bowl days was the main contributor; as conservation practices reduced those losses, drainage tiling of farmland has taken its place as a prime driver.

Though there’s no real denying the big picture here, there is hot debate over many details of exactly how modern agriculture drives sediment loads – and what should be done about it.

And gaps in our scientific understanding remain.

For example, Wilcock observed that even such a fundamental point as whether the Minnesota is being loaded up today by small erosion rates occurring over a huge area of the watershed, or by huge erosion rates on small portions, is not a settled question yet.

That doesn’t keep people from picking sides, though. The first scenario clearly implicates upland farm fields, while the second looks more like natural deposits from bluffs, ravines and stream banks.

But the pace of discovery is picking up, too, Wilcock said. As a case in point, he presented a recent research effort with Minnesota colleagues to create a “sediment budget” for the Le Sueur River’s watershed, which empties into the Minnesota at Mankato and forms what Wilcock calls “the beating, muddy heart” of sedimentation for the entire Minnesota River basin.

Here’s some of what science is able to do today, most of which was impossible as recently as 20 years ago:

“Basically, we can tell if sediment has been on the surface, like a plowed field, or whether it comes from a steep bluff. … Stuff rains out, sticks to the soil, and that allows us to take a teaspoon of soil from Lake Pepin and say, this much came from [upland] soil and this much came from stream banks.”

In trying to bring all of sediment sources and destinations into balance, Wilcock said, researchers made one big and unexpected finding: A majority of the sediment is coming not from upland, meaning cropland, sources but from bluffs, stream banks, ravines, floodplains.

Is agriculture off the hook, then? Well, not quite.

Citing research from Minnesota’s Shawn Schottler, and others, Wilcock summarized findings that rivers and streams are becoming more erosive, eating away their banks more rapidly because of increased flows that can be attributed primarily to drainage tiling, with climate-related precipitation patterns in second place, and cropland expansion a distant third.

Schottler was on the panel that discussed Wilcock’s talk and fielded questions from the audience. For his comments and those of Carrie Jennings, a geologist with the Minnesota Department of Natural Resources, and Paul Nelson, who grapples with these issues as environmental services program manager for Scott County, check out the program video here.