Minnesota has had its brushes with drought in recent years, but nothing like the experience of the American Southwest, where 11 years out of the last 14 have been marked by seriously deep, dry spells across large parts of Arizona, Nevada, New Mexico, Oklahoma and Texas.

Not to mention California, now in its fourth year of a drought that could go into the record books right now as the worst in more than a thousand  years.

Such a comparison is possible – and verifiable – because of tree-ring data assembled into the North American Drought Atlas, which came out in 2009 and presents a record stretching back roughly 2,000 years.

Two millennia is an unusually long timeframe for climate data, and last week the atlas enabled this striking conclusion from climate scientists at NASA, Columbia and Cornell:

Under any reasonable outlook for global warming over the rest of this century, both the American Southwest and the central Great Plains – including much of Minnesota – are likely to experience drought on a level “unprecedented” since the year 1000, and significantly more severe than a pattern known to have occurred early in the last millennium.

I put the quotes around “unprecedented” not to qualify it, nor to quibble with it, but because it is precisely (and I think remarkably) the term used in the title of the paper, which was unveiled late last week at the American Association for the Advancement of Science’s annual conference in San Francisco, and published simultaneously in AAAS’s new online journal, called Science Advances.

(Because it’s an open-access journal,  you can read Unprecedented 21st century drought risk in the American Southwest and Central Plains for yourself without fee and at your convenience.)

The paper’s point is not that the coming drought regimes lack for serious though less severe  predecessors. In medieval times, the paper says, both the Southwest and the Central Plains  experienced “megadroughts” — periods of seriously depressed soil moisture much worse than anything in the so-called historical period of 1850-2005.

Disappearance of the Anasazi

For one example, there’s the prolonged drought about 1,300 years ago that is thought to have wiped out the Anasazi Indians and the pueblo culture they had developed on the Colorado Plateau, in today’s Four Corners region.

And as shown in the graph below, from an earlier paper on megadroughts as recorded in tree rings, the current patterns are approaching the intensity of some earlier extremes. 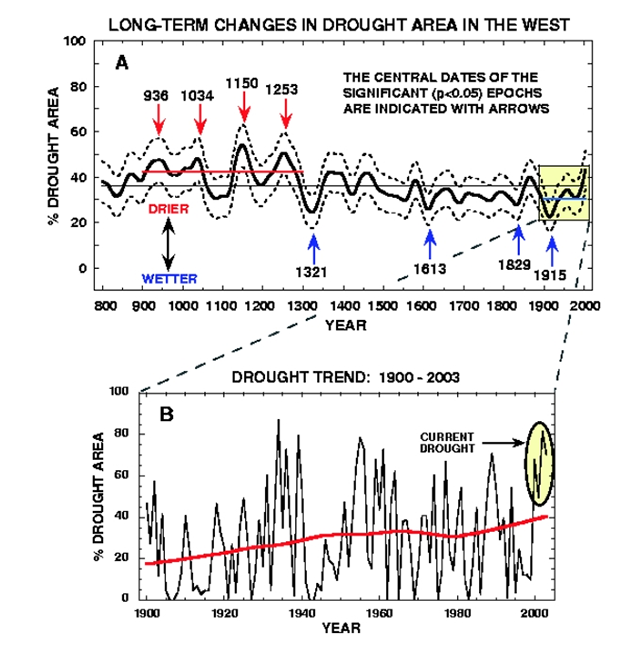 But megadroughts of the future, according to the new publication, will be worse, because of global warming and other climate shifts driven by our loading of the atmosphere with greenhouse gases.

From the announcement issued by Columbia:

Many studies have already predicted that the Southwest could dry due to global warming, but this is the first to say that such drying could exceed the worst conditions of the distant past. The impacts today would be devastating, given the region’s much larger population and use of resources.

“We are the first to do this kind of quantitative comparison between the projections and the distant past, and the story is a bit bleak,” said Jason E. Smerdon, a co-author and climate scientist at the Lamont-Doherty Earth Observatory, part of the Earth Institute at Columbia University. “Even when selecting for the worst megadrought-dominated period, the 21st century projections make the megadroughts seem like quaint walks through the Garden of Eden.”

“The surprising thing to us was really how consistent the response was over these regions, nearly regardless of what model we used or what soil moisture metric we looked at,” said lead author Benjamin I. Cook of the NASA Goddard Institute for Space Studies and the Lamont-Doherty Earth Observatory. “It all showed this really, really significant drying.”

Reaching this conclusion required aligning tree-ring data with three modern metrics of available soil moisture, to “calibrate” them, then aplying the forecasts of 17 state-of-the-art climate models. (Interestingly, Ben Cook’s father, Ed, is also a father of the atlas project.)

Regardless of how soil moisture is measured, its essential drivers are only two – how much precipitation falls on the ground, and how quickly it evaporates back into the atmosphere. Both can be expected to change with continued global warming.

While much of the current conversation about impacts, adaptation and mitigation strategies centers on precipitation – because water is so critical, and because shifting rainfall patterns are difficult both to predict and to manage around — it looks like the latter is going to be the bigger drought driver. From the paper:

All three moisture balance metrics show a remarkably consistent drying during the later half of the 20th century. Drying in the Southwest is more severe than that over the Central Plains. In both regions, the consistent cross-model drying trends are driven primarily by the forced response to increased greenhouse gas concentrations…

Even though cold season precipitation is actually expected to increase over parts of California in our southwest region, the increase in evaporative demand is still sufficient to drive a net relocation in soil moisture.

Over the Central Plains, precipitation responses during the spring and summer seasons (the main seasons of moisture supply) are less consistent across models, and the drying is driven primarily by the increased evaporative demand.

The researchers also considered two scenarios for global warming over the rest of this century: the RCP 8.5 or  “business-as-usual” scenario, in which emissions continue to increase on pretty much on their present course, and “middle-of-the-road” RCP 4.5, in which emissions are stabilized through concerted international action.

This desiccation is consistent across most of the models and moisture balance variables, indicating a coherent and robust drying response to warming. … Notably, future drought risk will likely exceed even the driest centuries of the Medieval Climate Anomaly (1100-1300 CE) in both future emissions scenarios, leading to unprecedented drought conditions.

Here’s how they think this century will look compared to the last millennium, with the brown line representing tree-ring data and the others representing three different metrics of available soil moisture, for the business-as-usual scenario:

For further reading, I can recommend good  coverage I found at Scientific American, Slate, National Geographic and the UK’s Guardian.

California’s drought, and recent trends, may pale beside our probable future