Every so often I get the question from friends or family: Doesn’t writing twice weekly about some aspect of our environment’s troubled health and clouded prospects make you discouraged, even depressed?

It’s a question I prefer to duck because it pokes at an occupational problem about which, I confess, I prefer not to think too much.

However, I will say this same problem was the source of the high hopes with which I picked up “The Big Ratchet,” by Columbia University’s Ruth DeFries.

In this book and a series of interviews and commentaries following its publication in September, DeFries has argued that doomsaying environmental pessimists are wrong because they are simply shortsighted. If we look at things through a long enough lens, she says, and over a long enough period of time, we will see that, in the phrasing of her subtitle, “humanity thrives in the face of natural crisis.”

To be fair, she also parts company with folks who claim that every conceivable problem is susceptible to a technological fix. But she consistently casts her lot with the optimists, and given her credentials this matters a lot, at least to me. So I wanted to know: Why?

DeFries holds an endowed professorship in ecology and sustainable development at Columbia, and by the count on her website has published “over 100 scientific papers related to how people are manipulating the planet and its consequences for humanity.” She has been elected to the National Academy of Sciences and in 2007 received a MacArthur Fellowship (the one invariably described as a “genius” grant).

DeFries’ background is in geography, earth science and engineering, with a specialty in remote sensing of the planetary surface via satellite.  And she styles herself as an “environmental geographer,” which of course puts one in mind of Jared Diamond.

So, is “The Big Ratchet” a sort of rebuttal to Diamond’s “Guns, Germs, and Steel” and its sequel, “Collapse”?

The short answer is no, which is one big reason that while I entered DeFries’ narrative with high hopes, I finished it with a heavier heart. 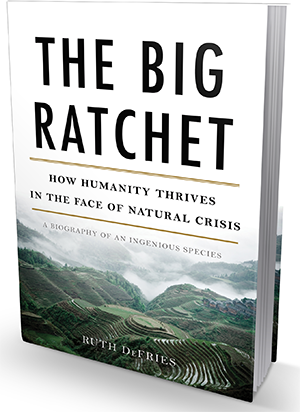 But first, let me say a bit about the many ways in which “The Big Ratchet” impressed, educated and even entertained me.

For starters there is the title metaphor, initially obscure but in fact perfectly apt.

DeFries conceives our species’ planetary manipulations (and some of Earth’s prehuman history as well) as processes that follow an ever upward, onward, expanding trajectory that may pause periodically but never reverse course – like the mechanism in your socket wrench or cargo strap that allows you to apply increasing pressure without fear of losing ground when you ease off.

Eventually, the ratcheting reaches a point of unsustainability that arrives in the form of a “hatchet” – a somewhat less apt way of characterizing sudden, perhaps catastrophic reversals of fortune.

If we are lucky, as DeFries feels we have invariably been so far, we then enter the phase of “pivot,” in which lessons are learned and courses corrected, allowing us to thrive once again. A leading illustration is the Irish potato famine:

After the voyages of Columbus brought the New World tuber back to the Old (in a typically delightful detail, DeFries cites the record of a hospital’s potato purchase in Seville in 1573), the new food’s nutritional value, culinary versatility and easy production quickly made it a staple  across Europe. People got taller, life spans lengthened, birthrates rose.

But as industrialization advanced in England, cottage industries across Ireland collapsed and a new peasant class turned to farming with a ready-made crop. Which worked just fine until 1845, when a fungal blight demonstrated the insecurity of this monoculture system with devastating speed.

Some 8 million people lived in Ireland then. A million of them died, another million fled to other lands. Those who remained figured out ways to fight the blight, with new potato varieties and different growing strategies, and many were able to give up farming for new factory jobs. But even today, DeFries observes, Ireland’s population remains below pre-famine levels.

This is an instance of “thriving.”

One may argue with the optimistic tone of that appraisal, but there is no quibbling with DeFries’ scholarship. If you are looking for a lucid, economical review of the factors in human prehistory that have made this planet uniquely suitable for its almost limitless diversity of life – from its location relative to the sun, to the tilt of its axis, to its magnetic core or mineral richness  or the surficial creativity of its shifting tectonic plates – this is your book.

But eventually one has to move with her narrative into the present day, where we are still on the upward/onward/outward expansion of what she terms the really Big Ratchet – the convergence of industrialization trends both old and new in agriculture.

Now, the ills of abundance

For most of human history, she notes, our manipulations and our populations were held in check to some degree by food shortages that periodically reached the scale of famine. Now, however,

Our current problems are more about abundance than about lack of food. Our species has never before had to grapple with such surplus. What once seemed like a dream has led to new crises: exploding numbers of overweight people, others still without enough despite the plenty, and an excess that leaks pollutants into the air and water. The pattern of unintended and unforeseen consequences continues, but the hatchets are new. …

The shift from high death and birth rates to low rates for both is known as the demographic transition. It is responsible for the massive explosion in the number of mouths to feed during the Big Ratchet, although it began around 1800 in northwestern Europe. The Big Ratchet’s transition ranks among the largest upheavals in human history, and in most countries it is still underway. In 1800, there were 950 million people in the world. By 1900, there were slightly more than 1.5 billion. And then the population began to explode: to 2.5 billion in 1950, 6 billion in 2000, and nearly 7 billion by 2010.

The dramatic upswing in numbers probably won’t level off until 2050, by which time there could be 9 billion people on the planet. … Human ingenuity will be put to the test yet again by all those mouths to feed and stomachs to fill, by all of those people in cities buying their food in stores rather than growing it on the farm.

Frightening prospects, you say? DeFries would differ. Here’s a bit of reassurance, with citation  to the Danish economist Ester Boserup, who clearly has her philosophical loyalty:

The Boserupian view leans on human ingenuity to find pivots for ratchets. The environmentalists’ idea of overshoot assumes that nature will run out of pivots. Neither of these views is sufficient in itself to explain the billions-strong dominance of our species on the planet, or to guide society’s decisions about the future.

If the bag of ecological tricks runs out, or if nature’s backlash is so overpowering that no pivot can evolve quickly enough to help, then overshoot could truly ensue. So far, and in aggregate, though, history tells the opposite story.

Today, fewer than a billion people are going hungry day after day, but more than a billion are overweight. … For every five people who were suffering from chronic hunger at the end of the 2000s, eight people were overweight. … Girths are getting wider throughout the developing world, and people are suffering from diseases related to being overweight as much as they are from diseases related to being underweight.

As for climate regimes disrupted by global warming, DeFries feels that “whether changes in climate from humanity’s meddling with the greenhouse effect are truly catastrophic for our species remains to be seen. Nevertheless, the expectation of the stable Holocene climate – the climate that has prevailed since humans transitioned to farmers – is no longer valid.”

So, much is going wrong these days; what is going right? I looked closely for signs of promising responses to these problems and found only scant, small-scale examples of “pivots starting to turn”:

People in cities are planting gardens on rooftops and slivers of land between buildings to grow a few vegetables. Some cities and communities are closing the loops to recover nutrients from human waste rather than washing them into the waste stream, as the ancient Chinese had learned to do long ago. Farmers are learning to use water and fertilizer more efficiently than in the bonanza times of the Big Ratchet.

Oh – and “while much of the world is upping its consumption of meat and other animal products, some people are moving toward more plant-based diets.”

Occasionally DeFries seems to have her thumb on the scale as she argues for the optimistic over the pessimistic view of our current predicament. For example, she sees the genetic modification of foods as no big departure from our history of selective breeding and hybridization, while omitting any mention of the “superweeds” problem they create.

And as for Jared Diamond – to whom we might expect a substantive response, given the similarity of their disciplines and subject matter, and the influence of his work – DeFries makes but three brief references, all in back-of-the-book footnotes. Only one mentions his actual thesis, noting without elaboration that his findings point not to triumphant technological pivots and human thriving, but rather to civilizations’ wholesale collapse.

I’m all for hopeful news about our predicament, at least as much as the next person, and perhaps there really is more of it out there. But I think you have to ask yourself:

Given the territory she has staked out in this book, who better to bring it than Ruth DeFries?