After a long siege of public pressure and negotiations, punctuated occasionally by media-savvy comic stunts, the 3M Co. has gone from the doghouse to darling of sustainable-forestry activists.

All it took was a wholesale rethinking of its responsibility for the steady stream of wood fiber it turns into Post-Its, masking tape and other products – and an unusual, against-the-trend decision to stop outsourcing accountability to third-party certification groups.

In a conference call with reporters on Thursday, 3M veep Jean Sweeney said the Maplewood-based corporation will end its reliance on assessments by the Sustainable Forestry Initiative, widely regarded as a greenwashing arm of large logging companies, to ensure that its purchasing doesn’t needlessly harm forests, communities or workers’ rights.

In doing so, 3M joins a roster of SFI ex-partners that includes AT&T, Office Depot, Allstate, Pitney Bowes, US Airways and Allied Electronics.

But rather than simply replace SFI with a more respectable certification outfit, such as the Forest Stewardship Council, for one leading example, 3M has elected the unusual and surely more expensive approach of doing its own screening, auditing and reporting throughout a vast supply chain.

While 3M is a huge producer of paper products, thus a huge consumer of wood fiber and pulp, it owns no forestland of its own. Instead, it relies on some 5,000 suppliers scattered across more than 70 different countries.

Though the company casts its new policy as a continuation of corporate strategies stretching back for decades, it also acknowledges that “comes on the heels of a multiyear campaign by ForestEthics,” joined last year by Greenpeace.

You could think of ForestEthics, headquartered in Canada but with offices in the United States as well, as an outfit as aggressive as Greenpeace in its challenges to SFI, which have included formal complaints to the Federal Trade Commission, but with a larger sense of whimsy when it comes to targets like 3M.

To spotlight issues in the 3M campaign, ForestEthics has unrolled a giant Post-It from the Washington Ave. bridge above the Mississippi River, and staged a bit of street theater with caribou-suited players outside a corporate meeting.

Last summer it hired a plane to drag a banner through the skies over Target Field before the All-Star Game that read, “3M do the right thing for forests.”

But yesterday, at least for public consumption, Sweeney and ForestEthics’ executive director, Todd Paglia, were talking of nothing but peace and progress in a future of mutual cooperation. Indeed, Paglia went out of his way to say that ForestEthics had learned a lot from 3M’s representatives in their negotations, a point he underlined to me in an interview. 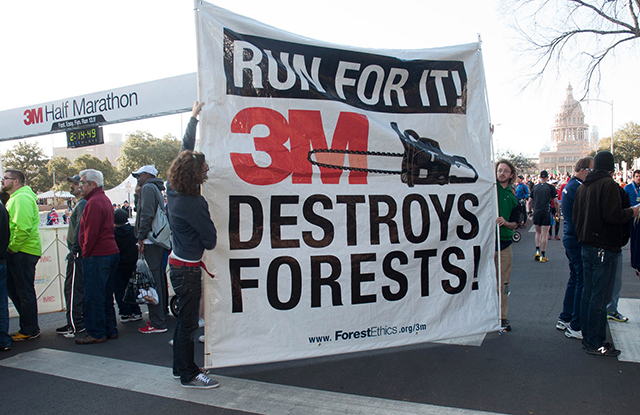 Creative Commons/ann harkness
ForestEthics protesting during a 3M-sponsored half marathon in Austin, TX, in 2014.

Going forward, FSC and other groups engaged in forestry certification – including Minneapolis-based Dovetail Partners and The Forest Trust of Santa Fe — will advise and assist 3M in its new approach. But it will be the company’s own employees – some newly hired for the purpose — who will:

On that last point, 3M announced that it has cancelled contracts with an Indonesian supplier, the Royal Golden Eagle Group, over logging practices and human-rights violations. It has also put a Canadian supplier, Resolute Forest Products, on notice that it must improve both its relationship with tribes and its stewardship of caribou habitat.

I wanted to know a little more about why 3M chose the intriguingly opposite strategy of taking its outsourcing back in-house. I reached out to Sweeney, whose vice-presidential portfolio covers environmental, health, safety and sustainability operations for 3M. In reply I got a company statement that I quote here in full:

The policy expectations are based on 3M’s sustainability values. As you heard on the call, by implementing the policy in this way, we are choosing not to delegate the responsibility for setting expectations to a third party. We recognize this might be the more challenging approach, but it aligns with how we do business.

So I asked Paglia for his thoughts, not only on 3M’s reasoning and whether its model might be widely emulated, but also on the prospect that taking all the work inside could actually result in less public transparency about sustainability performance, not more.

He acknowledged that darker possibility, but said it was not something he was concerned about. Many details of the new system remain to be worked out, he said, but there really should be no doubt about the sincerity of 3M’s change of heart:

We picked 3M very specifically for this campaign. We didn’t pick Monsanto.

We had a history of working with 3M, and we didn’t really think they were doing what they were capable of, but we also knew that they are very innovative and have a strong, values-driven culture.

And that’s what happened here.