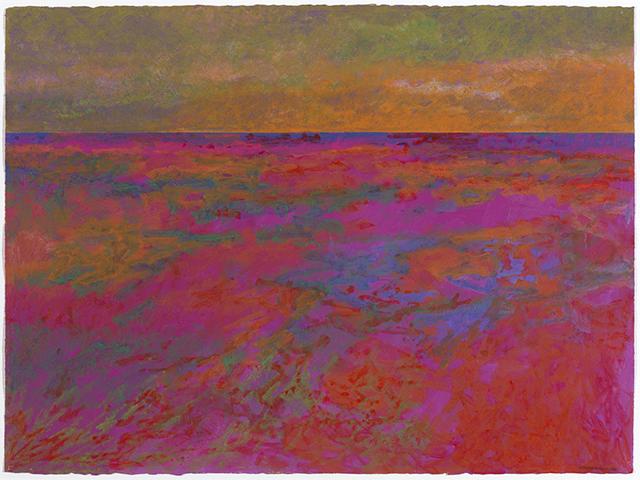 Courtesy of the Minnesota Museum of American Art
“Spirit Path, New Day, Red Rock Variation: Lake Superior Landscape, 1990.” Morrison painted it in his studio near Grand Portage in acrylic and pastel on paper.

One of the notions in my imagination was to capture the infinite variations and changes of moods that pass over the lake at different times. I am fascinated with ambiguity, change of mood and color, the sense of sound and movement above and below the horizon line. Therein lies some of the mystery of the paintings: the transmutation, through choosing and manipulating the pigment, that becomes the substance of art. — George Morrison, speaking to Margot Fortunato Galt.

It would be exaggeration to say I have been waiting all my life for “Modern Spirit: The Art of George Morrison,” now on view at the Minnesota History Center in St. Paul.

It only felt that way.

Not quite 25 years ago, in Phoenix on business, I carved out a couple of hours for a visit to what was then called, I believe, the Heard Museum of Indian Art.

The big draw was a chance to see Barry Goldwater’s vast collection of Hopi kachina dolls, but in the end I barely glanced at these.

Instead I spent the bulk of my time with a single sculpture: a 12-foot-tall column of carved and red-stained cedar just inside the main entry. I just kept circling it, moving away and coming back again and again, trying to fathom its gravitational hold, its rhythmic beauty, its apparent direct channeling of some force that brought tears to my unblinking eyes and forced me to remember to breathe.

Eventually I got to the exhibition tag and learned that it was called “Red Totem” and that it was completed in 1980 by a George Morrison of Grand Portage, Minnesota.

I’d never heard of this guy nor encountered one of his sculptures, paintings, prints or drawings in a decade of regular visits to the Minneapolis Institute of Arts, the Walker Art Center and other Twin Cities museums and galleries.

Soon enough I came to learn that Morrison had something like rock-star status, not only among American Indian artists but among American modernists generally – and certainly among contemporary artists from Minnesota, a state that displays worshipful pride in its constellation of actual rock stars.

Here was an artist who had studied, worked and taught in New York, Paris, Provincetown, Providence, Washington. His pieces were discussed (and displayed) alongside works by Willem de Kooning, Louise Bourgeois, Louise Nevelson, Robert Motherwell, Franz Kline … all of whom were easy to find represented at the Walker or the MIA.

But I had to go to Arizona to discover George Morrison – and then wait another quarter-century for this exhibition whose organizers at the Minnesota Museum of American Art call the first comprehensive retrospective of his work to be displayed anywhere. 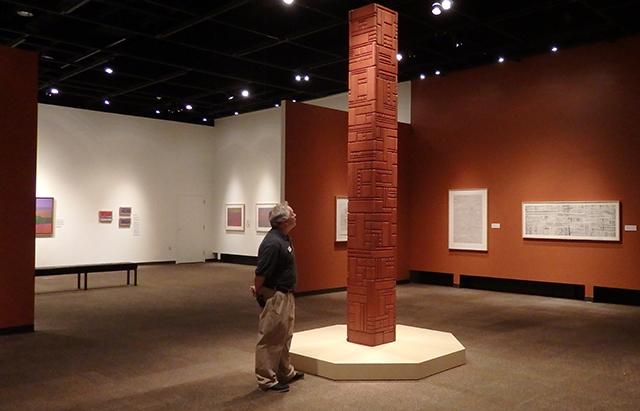 MinnPost photo by Ron Meador
Red Totem I, made in 1980 of stained redwood

I happen to think that George Morrison’s artistic vision of this earth was uniquely deep and spiritual, and that the work it informed is magical.

That’s my opinion, I suppose, but not mine alone, to judge from the awed reactions I observed among others responding to the 80 or so works now on display in “Modern Spirit.”

When I asked Sallie to see the show with me over the weekend, her response could fairly be described as ambivalent. She likes some art a lot, most modernist art not so much.

But as she went from painting to sculpture to drawing to print I saw her grow increasingly impressed and also moved; days later we are still passing the exhibition guide back and forth in wonderment.

And as for me …  well, let me first step back and say I am kind of the opposite of that guy who says, I don’t know anything about art but I know what I like.

I do know a little about art, from steady museum-going and intermittent spates of self-guided study, but I can never seem to say what I like in any coherent way.

Having seen “Modern Spirit,” I now know what I love about George Morrison’s work:

It’s the experience of seeing this earth through lenses of abstraction that actually shorten your distance from his subject matter, both its surface and its spiritual core.

Courtesy of the Minnesota Museum of American Art
“Cumulated Landscape,” a driftwood collage from 1976

I’ll confess that I had some ambivalence of my own as we headed over to the history center, because in the course of reading exhibition previews and watching a companion documentary, I knew that this show would tilt heavily toward paintings and prints that in some cases looked like forgettable student work and even, perhaps, a bit too much like other people’s stuff. 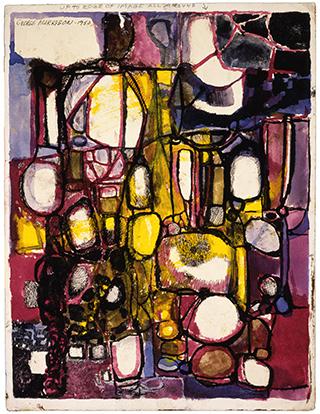 Courtesy of the Minnesota Historical Society
“Abstract Composition,” a watercolor from 1950

I well remember noticing, as I circled the Heard’s totem back in 1990, that its captivating charge reminded me of how I’d felt in the presence of Louise Nevelson’s monumental assemblages of scrap wood and bits of broken furniture, especially the ones painted flat black.

So I was interested and delighted to learn from “Modern Spirit” that Nevelson and Morrison were friends.

Not that their works are anything alike: Nevelson’s are urban and architectural; Morrison’s collages are about natural landscape and seascape, and his totems are singular. But there is a similarity of effect, I think, whose nature mostly eludes description for me – tough concession for a guy whose life’s work has centered on making paragraphs.

On the other hand, I read recently that “ineffability” is regarded by scholars as a fundamental element of mystical experience.

Which makes it easier for me to trust (and talk about) the vibration I feel from wood that’s been worked by Morrison or Nevelson – and, now, from Morrison’s paintings, prints and drawings as well.

If there’s mystery running through the works of “Modern Spirit,” there is also a consistent and plain-as-day devotion to landscape, organic forms and natural materials that unifies these works across all groupings by medium, format or period.

Morrison liked to speak of his driftwood collages as works made by “painting in wood.” From the earliest student paintings, a preference for thick layers of paint applied with a knife as often as a brush gives the surfaces a sculptural relief. Texture is important everywhere.

In this show are prints and drawings that look like rubbings made from driftwood. Intricate, painstaking drawings with a fine-point pen that resemble topographical maps, with contour lines charting swells that would be chaotic if not so quiet. Ballpoint and watercolor scribbles that blur any distinction between human figures and landscape forms.

As for composition, his famous horizon line, appearing somewhere from one-quarter to one-third of the way down from the top edge, seems to be almost everywhere from some point in the 1970s until his death in April 2000.

Morrison famously and consistently resisted efforts to categorize him as one kind of artist or another, and especially as an Indian artist. He was an art scholar and professor as well, perfectly willing to trace the influence of cubism, surrealism and automatic drawing techniques on his work.

But he spoke just as steadily of the experience of looking out over land, across water, up into the stars and painting not just what he had seen out there, through conscious observation, but also inwardly, through direct access to spirit.

It is magic, as I said, and if you doubt it you might just want to go see for yourself. The show continues through April 26 and you may find, as we did, that having waited for the first few weeks to pass pays off in a less crowded, more intimate experience of the work.

I think of the horizon line as the edge of the world, the dividing line between water and sky, color and texture. It brings up the literal idea of space in a painting.

From the horizon, you go beyond the edge of the world to the sky and, beyond that, to the unknown. I always imagine, in a certain surrealist way, that I am there. I like to imagine it is real. – George Morrison.

The quotations at the top and bottom of this piece are from “Turning the Feather Around: My Life in Art,” by Margot Fortunato Galt, published in 1998 by the Minnesota Historical Society Press.

An excellent exhibition catalog has been produced in connection with “Modern Spirit.”

A fine new biographical film about Morrison and the works in this exhibition has been produced by Twin Cities Public Television and the Friends of the St. Paul Public Library, and you can watch it online if you don’t catch one of the many rebroadcasts. And I happened on this interesting short film by Tom Kanthak, in which Morrison discusses his artistic responses to the natural world.