When the Obama administration rolled out its new plan for fighting antibiotic resistance last Friday afternoon – timing typically associated with announcements that fall, politically, on the spectrum between fraught and fuhgeddaboudit – critical reaction was swift, predictable and, I think, completely reasonable.

How is it possible that the federal government plans to double spending, to more than a billion bucks, in the interest of preserving the efficacy of drugs that have reshaped human health worldwide – and still declines to get serious about limiting their use, or even tracking their use, in commercial meat production?

The miracle of antibiotics is their ability to fight off bacterial infections when normal bodily defenses cannot. They can also be used, sometimes wisely and sometimes not, to prevent infection from gaining a foothold in the first place or, for convenience, to speed a recovery that was moving along anyway.

But nowadays at least half of the antibiotics administered in the United States – and possibly much more, as estimates vary — are given to healthy livestock purely to ensure that they reach the slaughter line at maximum weight.

To the extent the U.S. Food and Drug Administration tracks this practice, it collects data on the use of antibiotics in animal production only by drug class, not by particular drug or livestock type.

That is, it can say the general extent to which quinolones were utilized in making meat, but not how much was ciprofloxacin, nor how much went to bulk up hogs versus cattle – useful  things to know if there’s an outbreak of resistant E. coli among people who seem to have gotten it from hamburger, and whose doctors are reaching for the Cipro.

From a report in Saturday’s New York Times:

Researchers have been warning for years that antibiotics — miracle drugs that changed the course of human health in the 20th century — are losing their power because of overuse. Some warn that if the trend is not halted, the world could return to the time before antibiotics, when it was common for people to die from ordinary infections and for children not to survive ailments like strep throat.

One problem has been a lack of data, but the plan released Friday lacks specifics on how that would be addressed. More than 70 percent of the antibiotics sold in the United States goes to chicken, pigs, cows and other animals that people eat, yet producers of meat and poultry are not required to report how they use the drugs — which ones, on what types of animals and in what quantities.

This makes it difficult to document the precise relationship between routine antibiotic use in animals and antibiotic-resistant infections in people, scientists say. 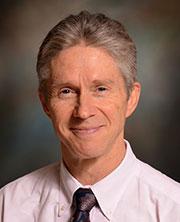 Among those scientists who often turn up in national media to talk about these topics is Dr. James R. Johnson, an infectious-disease specialist who treats patients at the Veterans Administration hospital near Fort Snelling and teaches medical students at the University of Minnesota. He has been studying the problem of antibiotic resistance for more than 20 years.

Although he has been quoted in assessing the administration’s continued reluctance to take on the meat industry and its drug habits as “depressing,” Jim Johnson is less inclined to reach for the ready sound bite than to prefer a measured, thoughtful discussion of the complicated realities that surround antibiotics’ use, misuse and potential decline from their status as true miracle drugs.

So I called him on Monday and we talked for the best part of an hour about why the continued carve-out for animal agriculture in our evolving approach to antibiotics policy is such a big deal relative to all the other factors driving antibiotic resistance. Excerpts from his comments follow:

With my clinician hat on, I have become very involved in analyzing a particular family of strains of E. coli that are called  ST131. It happens to have just taken off over the last 10 to 15 years, spread worldwide, and is now causing the largest fraction of E. coli infections of any strain, and also accounts for most of the  resistant infections.

This is something we’ve not really seen before: a major worldwide epidemic, you could call it a pandemic. It’s a very impressive strain, and people are now trying to figure out where did it come from, what allows it to do what it does, to be such a rock star. And what makes it particularly challenging is, it’s very hard to get rid of – once a person has it, it tends to stick around – and it’s extensively antibiotic resistant. So the treatment options are fairly limited.

If doctors aren’t aware that the patient has such a strain, they may use a wrong drug for a while, and patients can get worse and even die before the drugs have a chance to take hold.

Patterns of a pathogen

It seems to spread within families, to pass from person to person and even involve pets, so that when one person has an infection with this strain it’s not uncommon to find one or more additional household members carrying the strain, and they can carry it for quite some time.

I really don’t think it’s a super-aggressive pathogen. I think it’s more a really good colonizer that also, by the way, has the ability to cause disease. Or it may be able to elbow out other strains by crowding them out, outcompeting even other strains that are antibiotic resistant. But it sure does get around, and persist.

It likes old people, debilitated people; it seems to hang out in nursing homes, in people who have in-dwelling catheters and such. The typical ST131 strains are resistant to ciprofloxacin and related drugs, which have become the go-to drugs for urinary infections.

Some strains seem to be picking up new resistance as they go along. And there are some strains – rare as yet, thank goodness – that are so resistant that there are just about no antibiotics that will kill it.

Yes, ciprofloxacins were used in poultry production, but they were banned from that use in 2005 after five years of lawsuits between the Food and Drug Administration and poultry producers. And there has been a benefit in terms of a dropoff in resistance to drugs of that quinolone class.

The meat industry uses a large number of antibiotics, but the ones that can be administered in feed are not the ones that require injection – so, not some of our latest and greatest, the super-antibiotics.

But most of our workhorse antibiotics, the ones that can be taken by mouth, have forms that can be given in feed. And that includes the old-fashioned antibiotics and many of the newer, commonly used, heavily relied upon drugs.

Some drugs used in meat production have no human form at all, and are used strictly to control infections that occur only in animals and are not chemically related to drugs that are used in humans. But this gets tricky, because increasingly we realize that drug-resistance genes tend to link up, so a drug that you say, OK, has no human issues – it  can still create resistance to drugs of human importance, just because of the way genes tend to work together.

It’s really hard to show a direct link between meat-production patterns and specific human illness because it’s such a complex system and there’s a long, long separation between what happens on the farm and what ultimately ends up in a consumer who may or may not go on to develop an infection.

But there are studies linking dietary practices – like eating certain kinds of meat – to having drug-resistant urinary infections. There have been studies showing changes in food-production animal practices leading to different rates of resistant organisms on the meat as it shows up in the store, and also in community-wide levels of resistant human infection caused by the organisms that can be found on the meat, and in the animals.

But they weren’t tracking infections in humans, so they couldn’t show an impact on those rates.

A study from the Netherlands – which doesn’t use a lot of these advanced drugs in humans, they’re very cautious and reserved about drug use in humans, but their poultry producers have become more generous and liberal with them – noted a lot of E. coli infections in poultry and the beginnings of a rise in humans.

So the drugs were being used in poultry, but the resistant infections were turning up in humans. A genetic analysis was done, and a subset of E. coli that was causing bloodstream infections in humans, genetically, looked like dead ringers for the ones that could be found on the poultry products.

This line of evidence led to big changes in the last few years in how antibiotics are used in food animals in tbe Netherlands, and there has been a dropoff in resistant E. coli in the meat products and also in human infections.

The best data about the extent or appropriateness of antibiotic use in human medicine comes from Europe, because they actually collect the data in a uniform and systematic way, much to their credit, and much to the discredit of the U.S. for not being able to do something similar – we just don’t have the system in place, nor the political or economic will to set one up.

And of course there’s tremendous variation in the U.S., too, from practice to practice or hospital to hospital, and there are regional patterns. Every time it’s been looked at, it’s clear that there’s a lot of unnecessary antibiotic use. And the reasons for this are many – it’s a hot topic.

On the food animal side, there’s also concern about huge overuse, but it includes a usage that doesn’t exist  in humans – the so-called growth promotion or production use, where it’s not about disease treatment or prevention, has nothing to do with infection. Here the drugs are being used as metabolic stimulants or nutritional supplement, to get a little more weight gain per unit of feed applied.

One can quibble over the numbers, but it’s a lot, a lot, a lot – certainly more than half of the antibiotics used in this country going into host animals that are loaded with bacteria, so there’s a lot of selection pressure for resistance genes and resistant organisms.

There’s no transparency about that, no willingness to cooperate – no recognition that there might even be a hint of a problem – on the part of the food-production industry and the pharmaceutical manufacturers, and active resistance to doing anything about it.

In human medicine, there’s been a huge effort and acknowledgement that, yes, we have a problem, we need to clean up our act, we need to train people better, figure out why doctors are overusing antibiotics, come up with systems and educational programs, restrictions, antimicrobial stewardship, find a way to get by with less, on and on and on.

And on the animal side, deafening silence – or shouts of, it’s not our problem, leave us alone, and, no, we don’t want to share the data so anyone can figure out what’s actually happening.