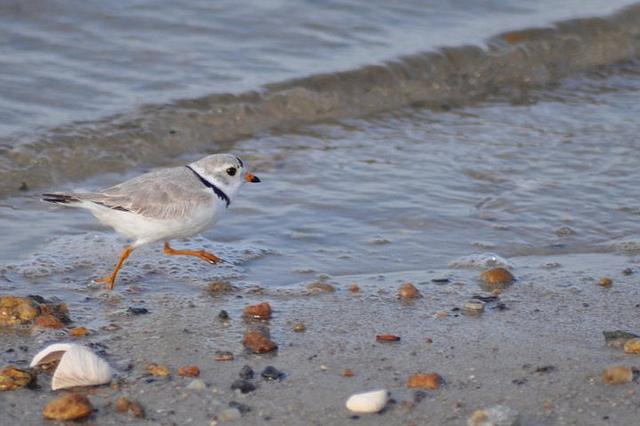 Sometime around midmorning last July 24, a piping plover took wing at Sleeping Bear Dunes on the eastern shore of Lake Michigan and headed for winter digs in greater Miami.

It was a pretty little bird, about the size of sparrow, and might have weighed two ounces give or take. It beat the air with a pair of wings that, fully extended, probably spanned less distance than your hands stretched wide with the thumbs touching.

On its legs were some researchers’ colored bands, placed in a pattern that permitted identification from a fair distance, not to mention from time-stamped snapshots. Which in turn made it possible to say with confidence that this particular plover had reached its cross-country goal in 44.5 hours max, covering a minimum of 1,385 miles at a pace that averaged 31 mph.

Now, that might be considered a decent clip even for a migrating Michigander of the human species, allowing as we must for a couple of overnights in motels and a half-dozen stops for chow at Cracker Barrel, Bob Evans and Applebees. Not to mention fill-ups at the gas pumps.

The plover, on the other hand, probably never even paused for a nap.

Its journey came up in in a presentation at the Minnesota Zoo last week by Francesca J. Cuthbert of the University of Minnesota, who has been watching our region’s piping plovers tread the teetering edge of extinction for more than 30 years. 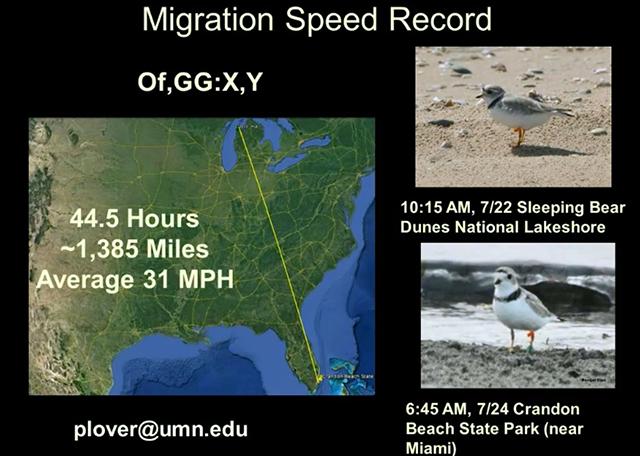 It was part of a narrative in which she explained how this bird came to be the single most imperiled species among more than 70 shorebirds now classed as threatened or endangered across North America – and also  delivered the good news that it’s plainly on the road to recovery now.

For that happy turn of events we can be thankful for the work of scores of  conservationists nd scientists, including Cuthbert and a stream of her graduate students, like the one who calculated the journey of last summer’s southbound traveler. If the plover has become the most imperiled shorebird, she said, it is also the most thoroughly documented.

Two types of plover, or three?

Piping plovers have never been terribly numerous; for a baseline natural population in the Great Lakes region, including Minnesota, Cuthbert offered the estimate of 200 to 300 breeding pairs at the turn of the last century. That would be after a certain toll taken by market hunters, who slaughtered the birds for their plumage – prized for ladies’ hats – and also, amazingly, for their meat.

The Great Lakes plovers are one of two or perhaps three distinct species, depending on who’s counting and why.

One summers and breeds along the Atlantic coast, and its numbers were estimated at a bit over 1,800 breeding pairs as of 2012. An interior or northern Plains species was even more numerous, at some 2,300 pairs. Nearly all piping plovers winter on the Florida and Gulf coasts.

The Great Lakes plovers, which numbered but 54 pairs in 2012 and perhaps 70 pairs today, can be distinguished just barely from the Plains species by genetic material in blood samples, which makes it a subspecies for some scientific purposes but not, as it happens, for separate treatment under the Endangered Species Act, which has protected all piping plovers since 1986.

As for plovers themselves, Cuthbert said, they “self-identify” and separate themselves into the three groups, only rarely moving from one to another on the breeding grounds. By “rarely,” Cuthbert is referencing a 20-year record that includes one known instance of a Great Lakes plover deciding to nest with the coastal Atlantic crowd, and one Plains plover taking up with the Great Lakers.

In other words, they flock together, and nobody is entirely sure whether that’s learned behavior or genetically determined. But one thing it isn’t, is easy – whether at the species/subspecies level or closer to home.

They can have high fidelity to their nest site and their mate, but only if the mate’s alive and shows up. … People like to hear about birds mating forever – well, that doesn’t happen, folks. It’s actually quite rare, because one mate will often die, or is slow getting there.

As for longevity, she said:

We have two records of females who have reached 14 years, and that’s really pretty  interesting because that’s about the same as the maximum age in the wild of a tiger, you know? Think of the difference in their life history strategies and so on. For a tiny bird like that, that makes a migration twice a year of more than a thousand miles, one way, there are a lot risks. 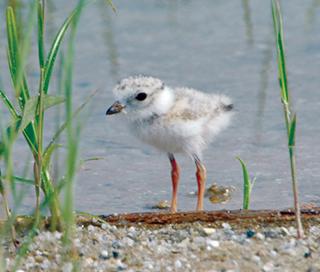 In some ways those risks have lessened over a century of protections preceding, then enlarged by, the Endangered Species Act that led to the piping plover being listed as either endangered or threatened throughout its ranges in 1986 – at point by which, Cuthbert said, the Great Lakes population was “almost functionally extinct.”

But protection hasn’t been easy, either:

Around the 1940s and 50s, museums are really starting to build their collections. Piping plovers are rare and everybody wants a piping plover. They’re easy to find, they nest on open beaches, and so professional collectors went to these beaches, communicated with each other, collected eggs, chicks, adults, and so on, and now you find them in all the major museums in North America.

I have records of collectors going to sites in Michigan and basically taking everything they found. … And plovers have never gone back to those sites.

If 54 breeding pairs of Great Lakes piping plovers in 2012 seems “perilously low,” as Cuthbert put it, it also represents progress of a kind; at the time of ESA listing in 1986, the estimate was of just 12-17 pairs at a half-dozen sites, including two toward the Duluth end of Lake Superior. Those sites are abandoned now in favor of places in Manitoba.

Modern pressures continue: There is habitat loss to development along lakeshores that are prime plover habitat. Development is also associated with increased predation by raccoons, great horned owls, skunks, feral dogs and cats, and household pets.

Not all of the development is residential, commercial or industrial:

Plovers like the most spectacular beaches in the Great Lakes, just like people do. … If you go through and look at the big parks, like Sleeping Bear Dunes, Apostle Islands National Lakeshore, Indiana Dunes National Lakeshore, Illinois Dunes State Park, these parks were established on these beautiful beaches, and plovers were there, too.

Now, as they’re recovering, they’re going back to those beaches, and park superintendents and biologists are embracing and welcoming plovers, and finding ways for plovers and people to live together.

Less happily, the Great Lakes plovers must now endure occasional surges of botulism, end stage of a process that begins with invasive, oxygen-robbing quagga mussels and works its way up a chain of decay and predation until it reaches the beetles on which plovers feed.

There is the slow-moving impact of climate change, with changes in Great Lakes ice cover that alter lake levels and can scour away prime nesting territory in shoreline beaches.

And then there are big, random events, like the Deepwater Horizon oil spill of five years ago:

Fortunately, the birds were already on their [northern] breeding ground when that happened or it would have been a disaster. …

We were greatly relieved, but everyone was wondering, what happens when they go back in the fall? The U.S. Fish and Wildlife Service put a lot of money into monitoring plovers, as well as other species, and I can’t tell you, really, what they found. … Because this is still a pending lawsuit, nobody can talk about it. So, sorry, I can’t tell you – I don’t even know. But we don’t see a difference in our [Great Lakes] population.

As of last summer, Cuthbert said, that population stood at around 70 breeding pairs, and there’s strong evidence that there may well be more in nesting sites that haven’t yet been found. If the population reaches 100 pairs in Michigan and 50 elsewhere in the region, and holds there for five years, the piping plover stands to be classified as recovered.

You can tell there is a lot of energy that goes into this for not very many birds, and why? What are the societal benefits of plover recovery?

Well, first of all, the piping plover is what I call an umbrella species … there are other rare species that occur within that same system. Several plant species are heavily threatened, there’s an insect species, there’s some species of birds that are not rare but are found in that coastal system. And so ultimately protecting plovers contributes to coastal conservation.

Francesca Cuthbert’s talk was part of the Minnesota Zoo’s World Speaker Series. If you, like me, weren’t able to attend in person, you can watch the online video here.

Piping plover is on the road to recovery, after a century of ever-shifting threats