Generally it’s best to prefer the long view when considering trends in U.S. adoption of renewable energy, where progress usually has been more steady than swift.

But I think a fresh analysis in Tuesday’s Today in Energy, a publication of the U.S. Energy Information Administration, is worth a look. A snapshot in time, yes, but an interesting and encouraging one.

The agency just closed out its data gathering for calendar 2014, a process that includes asking utility-scale electric power generators about the new capacity they are adding in the year ahead.

For 2015, these companies told the EIA they plan to boost their combined output by about 20 gigawatts. More than half of that will come from new wind and solar installations.

Combined, the two will account for nearly twice the new capacity being added in natural gas-fired generation, the other large growth sector, which comes in at 6.3 GW.

Visible in the far distance, but only just, is new nuclear. If the Tennessee Valley Authority’s troubled and much-delayed Watts Bar 2 project comes on line next December, as the TVA is now predicting, the first new reactor to join the U.S. nuke fleet in two decades will add but 1.1 GW to the national supply.

Rounding out the list are miscellaneous renewables projects that will add less than half a gigawatt.

The EIA also asks the utilities about capacity they plan to retire, and the takedowns add to about 16 GW. Just under 13 of those are coal-fired, no surprise, but about 2 MW are from natural gas, with not quite 1 MW in a category marked petroleum and other.

There are some interesting details to be found in the agency’s regional analysis:

These trends, which the EIA says are consistent with overall patterns of recent years, are captured in more detail by the March edition of the agency’s Electric Power Monthly, which came out a week earlier and is more about numbers, less about narrative. 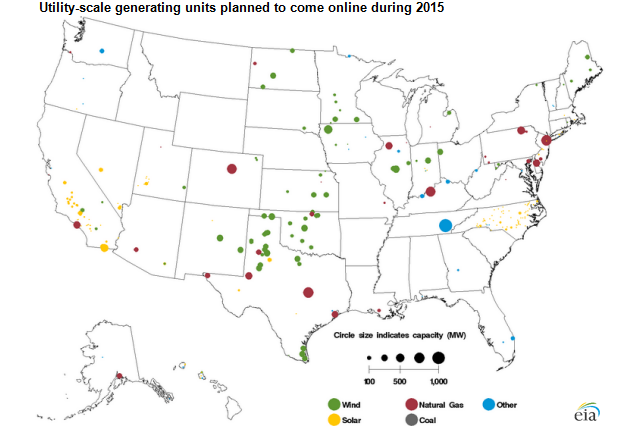 U.S. Energy Information Agency
A map from EIA shows the location and capacity of new power generation projects planned for 2015.

Still, I found some things to highlight in its year-over-year comparisons of electric power generation by energy source. These figures are for what EIA calls the “electric power industry,” which includes not only utility-scale generators but independent power producers and small commercial or industrial plants (the latter two categories contributing less than 1 percent of the total).

Here are the percentage changes from December 2013 to December 2014 for major energy sources:

The data further consider renewables by type. Wind was the biggest contributor by far, at 14,696 GWH (up 5.0 percent), but solar, both thermal and photovoltaic, posted the biggest growth rate at 15.9 percent (to 985 GWH).

Geothermal, wood and other biomass combined added a bit over 7,000 GWH to the total as of last December, about 3 percent more than a year earlier.

Remember, these figures reflect trends only in large-scale power generation: utilities in the year-ahead figures, and utilities plus other commercial and industrial generators in the year-over-year comparisons.

On the residential side

Developers installed a record 6.2 gigawatts of panels last year, including about 1.2 gigawatts atop homes, the Washington-based trade group said today in a statement. About 3.9 gigawatts of utility-scale and 1 gigawatt of commercial solar power were added.

The residential market remained the fastest-growing segment, gaining at least 50 percent in each of the past three years, as cheaper panels and growing consumer awareness of climate change spurred interest among homeowners.

And last year was the first, according to Bloomberg, in which California didn’t account for more than half the residential market.

I looked up the SEIA report and learned that if residential solar installations are counted alongside industrial-scale projects, “solar provided roughly one-third of all new electric generating capacity in the U.S. in 2014.”

Minnesota has not yet cracked SEIA’s list of top-10 states with the most installed capacity, which as of the  third quarter of 2013 went like this for photovoltaic power at residential, nonresidential and utility scales (figures in megawatts):

Snapshots in time, as I said, but rather pretty ones.

Wind and solar projects will power half of U.S. utilities’ new output for 2015