Somewhat to my surprise, and maybe yours, an analysis issuing last week from the Gallup Poll finds that almost half of Americans think the federal government is “doing too little” in the way of environmental protection these days.

To be precise, 48 percent of respondents gave that answer to a Gallup question carrying the traditional Three Bears framing of “too much/too little/about right.”

This percentage has been fairly stable in surveys going back to 2010, with the size of the plurality fluctuating between 46% and 51%, even as the percentage of Americans who rank the environment as a top concern has been steadily falling.

(This year, though, the overall concern measure actually ticked up three points, with 34% of respondents saying they worry “a great deal” about environmental quality  – a slightly lower level of worry than attends, say,  drug use or unemployment, but slightly higher than race relations or affordable health care.)

And this year the “too little” response is also – as it has been throughout this half-decade – about three times larger than the percentage of people saying the feds are doing “too much”: 16% this year, with recent fluctuation between 15% and 17%.

Historically, both numbers represent a significant shift toward the middle.

In 1992, when Gallup first asked the question, 68% of Americans said the government was doing too little to protect the environment, while only 4% thought it was doing too much.

In the center, 26% thought federal efforts were “about right”; that number has changed far less than the others and stood, in the most recent results, at 34%.

How should we think about these trends?

Here’s some interpretive guidance offered last Thursday by Gallup’s Justin McCarthy, who gives considerable credit to the man in the Oval Office – or, at least, to public perception of his policies:

Gallup first posed the question in 1992, and since then, Americans have always been most likely to say the U.S. government is doing too little to protect the environment. Majorities ranging from 51% to 68% held this belief until 2006.

In polls since Obama took office, however, Americans have been less likely to say the government is falling short on environmental protection, though this has remained the dominant view. At the same time, more Americans have said the government is doing too much to protect the environment, reflecting the partisan nature of views of issues such as efforts to reduce industrial pollution and global warming.

Among some recent actions McCarthy offers as examples of administration policy that may be driving the change are Obama’s call for enhanced protection (read: drilling restrictions) in the Arctic National Wildlife Refuge, his veto of a congressional effort to force approval of the Keystone XL pipeline project, and an executive order last month directing federal agencies’ purchasing power toward measures that would shrink the government’s carbon footprint.

Well, maybe. But to me, at least, these examples seem so narrow and incremental that I can’t imagine them driving much of an opinion shift among people who are actually paying attention.

Whether or not you consider the Arctic refuge a sacred place, even a cursory familiarity with the history of protections there would bring you to understand that current management plans wouldn’t undergo anything like  sweeping change.

And on climate issues, where the social fault lines are so bright and opposing views so hardened, is it really plausible to think these actions can move the needle very much?

Is there an ‘Obama effect’?

Attributions to some kind of “Obama effect” are also undermined a bit by answers to Gallup’s questions about approval of the president’s job performance on “protecting the nation’s environment” and “improving the nation’s energy policy.”

On both questions, approval ratings plunged dramatically from 2009 to 2010 – from 79% approval to 52% on environmental protection, and from 72% to 43% on energy policy – and they haven’t changed much since then.

McCarthy notes that these trends mirror those for Obama’s performance rating in general, and aren’t as dismal as Bush’s, which had started out at 51% approval on environmental protection and finished out at 31%. (On energy policy, the numbers were higher in the honeymoon year – 58% — but fell even more sharply, to 23% in Year 8.

They also – no surprise – tend to correlate highly with party affiliation.

Though it’s not quite as cut and dried as you might expect, it’s interesting to look at how party affiliation affects respondents’ views of overall federal performance on environment, especially among those who think “too little” is being done. 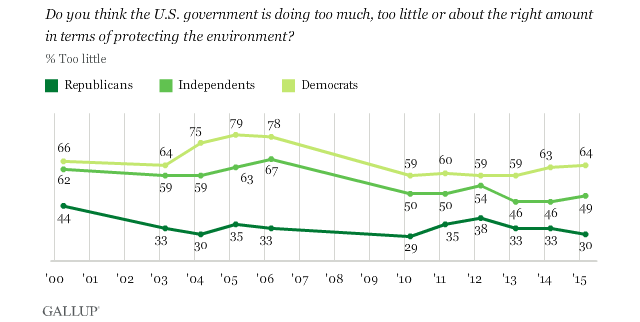 Democrats have changed the least in their views over time; 64% find environmental protection shortchanged this year, versus 66% at the start of the millennium.

But look at the trends over the first six years of the chart – the first six, also, of the Bush presidency, which were marked by a series of prominent protection rollbacks on issues from greenhouse-gas reduction to preservation of roadless wilderness to reducing air pollution from the nation’s electric power sector.

It’s not hard to imagine Republican respondents feeling generally and almost immediately encouraged by Bush’s triumph in 2000, while it took the Dems and independents a little longer to catch on to his agenda – at which point they began to fault federal efforts in significantly larger numbers (Dems especially).

As for Obama and his legacy, here’s McCarthy’s summing-up, my emphasis added:

Although Obama has just two years left in office, his efforts to make a difference on energy and environmental issues may leave a legacy for his administration. But in the meantime, his domestic and international initiatives over the last five years of his presidency have not made much of a difference in how Americans view his performance on these issues.

Obama consistently gets higher ratings for his work on the environment than for his work on energy, something that is also generally true of Bush, his predecessor. Obama’s recent decision to veto the Keystone XL pipeline project, citing environmental concerns, most likely highlighted his priorities on these two issues.

Gallup has found that the environment and energy are among the issues Americans worry about least, so while Obama’s work in this area may garner attention from politicians, energy companies and environmental groups, these efforts might not mean as much for the nation at large.