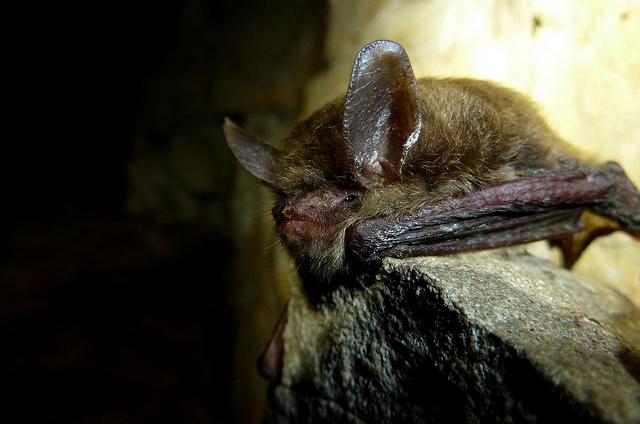 Any fears that the northern long-eared bat would become a latter-day northern spotted owl, federally protected at the cost of loggers’ jobs, pipeline projects and wind farms, were put to rest yesterday with the U.S. Fish and Wildlife Service’s announcement of a protection plan that might fairly be described as minimalist.

I’m not saying that’s a travesty. I think everybody understands that the principal killer of these bats is a fungal disease, white-nose syndrome, that so far has eluded both a cure and effective controls as it marches westward with generally genocidal impact.

Nor am I saying, as some environmentalists are, that this decision represents an FWS cave-in to powerful industrial interests, simply because it anticipates restrictions on a minuscule portion of forestland in the bats’ overall range across 37 states.

If the agency is taken to court over this application of the Endangered Species Act, which seems likely, we may come to know more about how FWS came to abandon its earlier preference for more robust protections.

In the meantime, I will just observe that in a conference call with reporters yesterday, agency officials missed no opportunity to stress their commitment to balancing their obligations under the Endangered Species Act with “limiting the regulatory burden on the public” – a phrase that could be taken to suggest that bats are under heavy pressure from the forestry practices of ordinary, individual citizens, which they are not.

Also, that it might be difficult to design a protection program much less restrictive of commercial activities in the forest habitats of these tree-nesting bats than the one rolled out yesterday in what is known, in ESA parlance, as a 4(d) rule.

Under section 4(d) of the Endangered Species Act, FWS has considerable flexibility in the setting of specific protections for a species, and it came into play in this instance when the service abandoned its initial proposal to classify the northern long-eared bat as “endangered” and opted for the lesser status of “threatened.”

In announcing this shift yesterday, FWS officials led by Tony Sullins, who oversees ESA issues for the Midwest region, helpfully explained that endangered means “on the brink of extinction,” while threatened  means “headed for the brink,” a precipice this bat is projected to reach in the next 8 to 13 years.

There was no comparably clear explanation of why the shift was made, except to say it was a “scientifically sound decision” informed by a wide range of conversations with scientists, state and tribal resource managers, and other stakeholders.

But the upshot was plain: According to Sullins, the 4(d) rule is likely to result in restrictions in less than one-half of 1 percent of forest land within the northern long-eared bat’s natural range.

The announcement brought swift condemnation from groups including the Center for Biological Diversity, which issued a statement that began:

Despite a greater than 90 percent drop in northern long-eared bat numbers, the U.S. Fish and Wildlife Service today reversed course and protected the bat as threatened rather than endangered under the Endangered Species Act. Under intense pressure from industry and conservative politicians opposed to the bat’s protection, the Service also issued a special rule specifically allowing many activities harmful to the bat, including logging, oil and gas drilling and mining.

“These bats are losing more ground every day to a devastating disease, and instead of providing strong protection for the survivors, the Fish and Wildlife Service has given the green light to logging, oil and gas drilling, mining and other habitat-wrecking industries,” said Mollie Matteson, a senior scientist with the Center for Biological Diversity. “Weakening protections for the northern long-eared bat when it’s just barely surviving white-nose syndrome is like  suckerpunching a cancer patient. We’re definitely going to fight this highly political decision — one that all but ignores the science.”

Apart from white-nose syndrome and deliberate human interference with hibernating bats, which nobody is highlighting as a significant threat, the main pressure on northern long-eared bats seems to be timber cutting and tree clearing for various purposes in forests where they nest, give birth and raise pups during June and July. Of special concern are “maternity trees” where they do these things in large roosts.

Consider this excerpt from a sign-on letter than Matteson’s group organized and sent to the Interior Department last December, urging that FWS stick with an endangered status for the species, and bearing the signatures of some 80 bat researchers:

Since the bat disease has only recently moved into the upper Midwest, it remains to be seen how it will affect the northern long-eared bat there, but given the region’s climatic similarities to the Northeast, it seems likely that white-nose syndrome will be similarly devastating in that region. Finally, the northern long-eared bat’s numbers in the southern and western portions of its range are naturally low, providing little buffering to the extreme losses already incurred in the heart of the species’ range.

Less than 1% of forest affected

The 4(d) rule proposed by FWS considers the country in two zones, one where white-nose syndrome or the fungus that causes it have been found, and all the rest. The first zone stretches west from the Atlantic coast and includes much of Minnesota, where the fungus has turned up but no disease syndrome has yet appeared; the second stretches onward through the Dakotas. 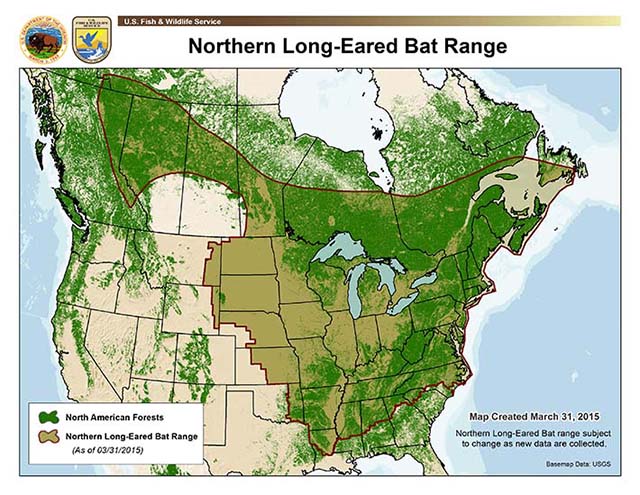 U.S. Fish & Wildlife Service
The 4(d) rule is likely to result in restrictions in less than one-half of 1 percent of forest land within the northern long-eared bat’s natural range.

No restrictions are proposed for the second zone. In the first,  deliberate actions that kill, harm or harass bats are generally prohibited, except for removing them from homes or other “human structures,” which is OK.

The main concern is over activities that are “incidentally” harmful to bats in the course of pursuing other goals, like managing forest land or laying a new pipeline or building a new road.

Here, the critical test is whether, in the words of a guidance FWS has published in accordance with the 4(d) rule, “a northern long-eared bat maternity roost tree or hibernacula has been documented in the project area.”

If no, go right ahead. If yes, be sure your activities don’t come within a quarter-mile of the protected site  while the bats are present.

If you don’t really know, “We suggest that  you contact the U.S. Fish and Wildlife Service Ecological Services Field Office nearest your project area.” (My emphasis added.)

But there’s little more the service can do, Sullins said: “We can’t require private people to make surveys of their land for maternity trees.”

During yesterday’s call, certain reporters registered skepticism on this point, both about the extent of what’s known about the location of critical roosting areas and the willingness of foresters to do the right thing.

Sullins acknowledged that there was much to be learned about the distribution of roosts, and also that much of what’s known about that distribution in Minnesota comes from surveys conducted by the Enbridge pipeline company, which has a stake in showing that bat populations are robust in the sections of Minnesota where it proposes to run new pipeline corridors.

However, he assured everyone that he and colleagues had yet to meet a forester who would intentionally take actions harmful to the species. Anyway, “there is almost always a path forward for development” in areas where bat roosts could be under pressure.

Because I had heard Sullins make a presentation last December at a forum in the Twin Cities, I asked about comments I thought I recalled, regarding possibly optimistic new signs of resilience in bats in the white-nose zones back east, and also about his thoughts on what possible future developments might lead FWS to revisit the decision announced yesterday.

We don’t know whether there are bats in any part of the range that are actually resilient or resistant to white-nose syndrome. We don’t have evidence of that. What we have that could be potentially promising is that there are survivors.

There are northern long-eared bats that are still alive, still being caught, even in New York state, the first state to detect white-nose  syndrome in 2006 and 2007. So, eight or nine years later, bats are still being found alive there, in very small numbers.

There’s information about a remnant population in Long Island that has not been impacted by white-nose in spite of proximity to the original source of the fungus. So there’s something about that we think is some reason for hope, but not something that lets us conclude there are bats there that have some type of genetic or other resistance to the disease.

The outlook for the future, he said, is that extermination by white-nose syndrome will continue to spread westward at a pace of 150 to 175 miles a year, which means that “it will be in Minnesota” within a few years, throughout the bat’s range within the next 8 to 13 years.

And despite the considerable power of the Endangered Species Act to stave off extinction, regardless of cost, its FWS enforcers have concluded that there’s really very little that can be done, perhaps even ought to be done, about that.

Quite possibly they are right.