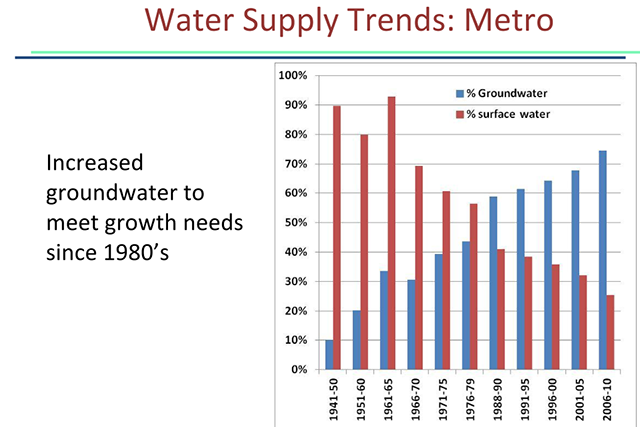 To judge from the audience reaction, two charts presented by Deb Swackhamer in a talk Tuesday on the future of Minnesota’s water resources made compellingly clear why the Land of 10,000 Lakes might have some scarcities looming beyond the horizon.

The one above shows how the water supply in the Twin Cities metro area has shifted from surface sources, like the Mississippi River, to groundwater pumping in the decades since World War II – an almost complete reversal in a couple of generations.

The problem with that, she explained, is that “groundwater is like a savings account you save for a rainy day – you want to save it for when you have a drought.”

Unlike surface water, which she likened to a checking account, you can’t count on regular deposits of seasonal rains. Groundwater is replenished on geologic time scales, which means “it might take 10,000 years to replace a year’s worth of use.”

Which brings us to the second chart, below: 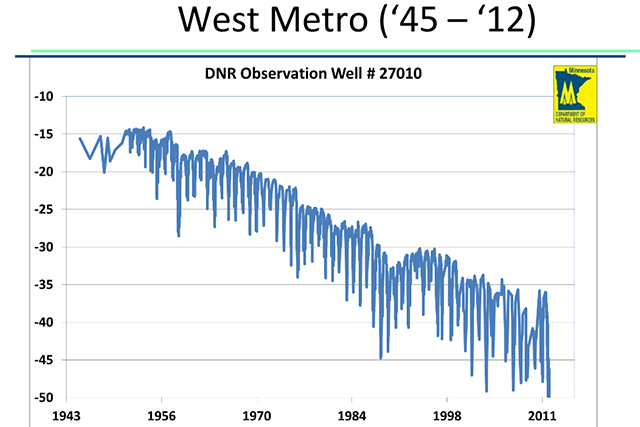 This is a hydrograph of the water level of the Prairie du Chien-Jordan aquifer, measured in feet below the surface at an observation well near Orono.

Each year is represented by a vertical blue bar, whose high side is summertime use, and the band of bars shows a steady downward march of unsustainability, toward a crisis point whose arrival date is difficult to predict though impossible to deny.

But based on state-of-the-art modeling by the Metropolitan Council, Swackhamer said, it seems likely that a continuation of current population and usage trends will bring significant shortages as early as the year 2030.

There is a simple alternative: Getting strategically selected communities in the metro, and in other designated “areas of concern” around the state, to build new pipelines that can bring them water from surface sources instead of underground.

Simple, but neither cheap nor politically palatable.

A gift for synthesis 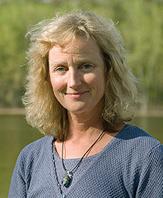 Swackhamer has a serious gift for synthesizing complex scientific material in ways that non-specialist listeners can grasp, and it’s paired with matchless expertise on this subject:

She directed the University of Minnesota’s Water Resources Center from 2002 to 2014, and led the effort to produce the massive Minnesota Water Sustainability Framework, commissioned with funds from the Legacy Amendment to provide policy guidance for decision-making over the next 25 years.

She has served in leadership roles on scientific panels advising the U.S. Environmental Protection Agency and the International Joint Commission, and has just begun a three-year term on a National Academy of Sciences panel focused on environmental science and toxicology, recognition of her focus on toxic-chemical pollution.

And she does not shrink from controversy. For example, she had much to say about the fraught connections between large-scale agriculture and Minnesota’s water problems, some of it quite provocative.

The major driver of these impairments is excessive inputs of nutrients, primarily phosphorus and nitrates from fertilizers, and the major source of those nutrients is row-crop agriculture. 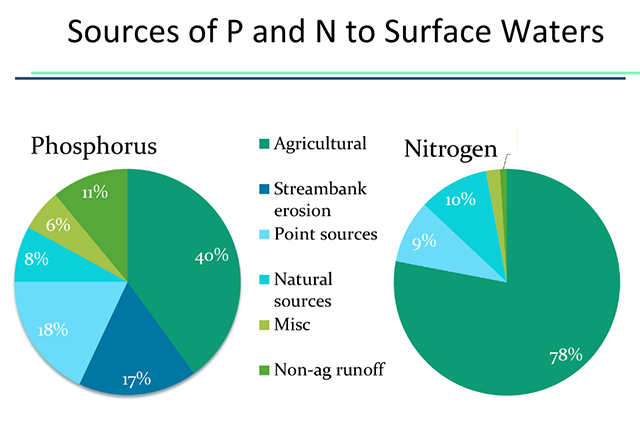 Since Minnesota banned phosphorus-based lawn fertilizers, the amount of phosphorus contributed by nonagricultural (and chiefly urban/suburban) runoff has fallen to about 11 percent of the total. Agriculture contributes almost four times that share of this pollutant, which fuels algal blooms.

With nitrates – which carry public health risks and are the only major water pollutant, she said, whose levels are still increasing in Minnesota – agriculture contributes 78 percent of the overall load.

If these chemicals were flowing from factories, sewage plants or most other sources, the problem could be readily addressed through permits and other limits.

“The regulated community has these boundaries, and they live within them,” she said. “Agriculture’s tougher. Through a quirk in the law, row-crop agriculture is exempted from regulation under the [federal] Clean Water Act.

“So our hands are kind of tied unless we can find some other way to incentivize the agricultural community to participate in cleaning up the water. My personal opinion is, there has to be an investment from the public in bringing about those changes.”

At other points, Swackhamer said:

I don’t mean to malign agriculture in any way. … They’re business people, so they do what they do to make their business work.

But there’s no limit on how much they can use, nobody to say they’re using too much, and it’s cheap insurance to make sure their crops will grow.

One possible but partial solution, she said, is wider use of reservoirs to catch and retain water removed from fields with drainage tile. Presumably these could also become sources of water for irrigation, which has been the fastest-growing use of Minnesota groundwater in the last 20 years.

Another, she said, would be a serious effort to protect lakes and streams with buffers of minimally cultivated land, as proposed by Gov. Mark Dayton.

The current buffer standard of one rod, or 13 feet, could remove only 2 to 5 percent of nitrate  runoff even if it were rigorously enforced, which it is not. The 50-foot buffers Dayton wants to require would immediately raise the filtration capture to 50 percent.

Swackhamer made a point of noting signs of hope and progress on Minnesota water issues, including:

Swackhamer’s subject was so large, and her talk was so wide-ranging, that I’ve only been able to cover some of the main points here. For a video of her full 50-minutes presentation, plus an hour of Q&A with an engaged audience, you could go here.

Tuesday’s talk was at the Minnesota Zoo, as part of its World Speaker Series.

How can Minnesota achieve sustainable water use? Agriculture holds the key