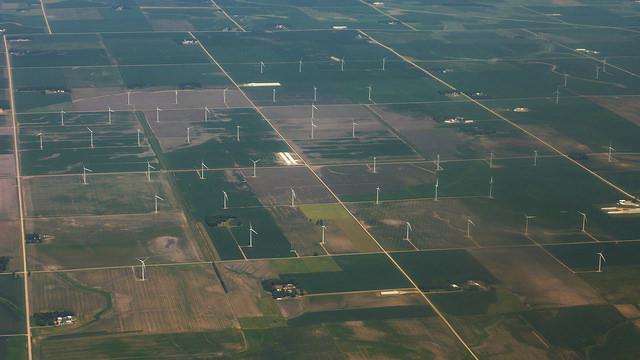 As the U.S. Environmental Protection Agency prepares its final rules to drive down greenhouse-gas emissions from electric power generation, an analysis published today suggests that Minnesota’s utilities may be able to meet the requirements with relative ease.

The report, prepared by Bloomberg New Energy Finance, lists the shift in boiler fuel from coal to natural gas as perhaps the state’s largest single advantage:

Coal is the largest generation source, but natural gas is becoming more important in MN’s power mix, providing 14% of electricity and accounting for 33% installed capacity in 2012, while coal is trending downwards. Coal-fired electricity generation fell from 59% in 2008 to 46% in 2013, and 396MW of coal plants have announced plans to retire between 2015 and 2017. 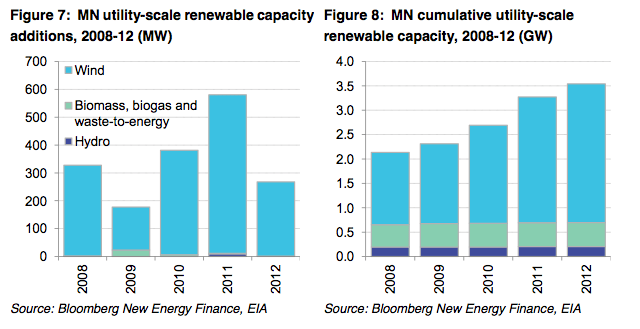 Courtesy of Bloomberg New Energy Finance and The Business Council for Sustainable Energy
Minnesota’s renewable generation capacity is on the rise.

But there are other factors working in Minnesota’s favor as well:

Today’s report was prepared by Nathan Serota, an analyst at Bloomberg New Energy Finance. It was commissioned by the  Business Council for Sustainable Energy, a 23-year old trade and advocacy group devoted to “implementing market-based approaches for reducing pollution and providing a diverse, secure mix of energy resources."

The council’s board members include top executives from organizations with shared interests but sometimes different stakes in the nation’s energy future, including the Worldwatch Institute and the Alliance to Save Energy, the American Gas Association and United Technologies Corp. (I admit I didn’t see any coal companies on the roster, but several utilities are represented.)

An earlier BNEF/BCSE fact book published in February looks at the national picture; the Minnesota report published today is the second in a series of state-level close-ups.

I asked Serota for his take on the positions staked out by Xcel Energy and Minnesota Power, in particular, in arguing that the EPA’s initial proposal failed to credit all of their past investment against the coming curbs.

He told me that the analysis didn’t look at data for individual utilities, but rather at the state’s overall performance and capabilities in areas important to comply with the EPA rule. The regulation is to be finalized sometime this summer. (Of course, it is also being challenged in court.)

I wondered, too, about the observation in his analysis that Minnesota is a net importer of electricity – producing 51 million megawatt-hours in 2013, while consuming 67 million.

Does that make this one of those rare times when Minnesota might benefit from being at the end of all the pipelines, or in this case a powerline, if the other end is where the emissions assessments are made and the controls applied?

Not necessarily, he said, because compliance strategy will depend not only on the final terms of EPA’s Clean Power Plan but also on how each state elects to comply. Minnesota could partner with another state or states in a joint emissions-reduction plan, or participate in a wider program of trading in emissions credits.

The main point to keep in mind, he said, is that Minnesota already has a strong framework of policies and requirements in place on most aspects of reducing emissions, expanding renewables and promoting efficiency.

So it benefits from experience in knowing how things work and what they cost, where to find flexibilities and where to look for tradeoffs. This applies across the board – from efficiency standards to renewables to experience with high-efficiency plants using combined-cycle gas turbines, or CCGTs.

On the latter point, he said, the analysis shows that Minnesota ranks last or nearly last among the states in utilization of its CCGTs, meaning the percentage of generating capacity that is actually being used to make power. So there’s significant capacity as yet unused.

Some other interesting points from Serota’s analysis:

Which is pretty important because, after all, the cleanest (and cheapest) megawatt-hour is the one you don’t consume at all.