Today’s topic is how climate change is threatening the world’s polar bears by shrinking the arctic sea ice they require for seal hunting and therefore survival.

But first, class, let’s test your knowledge on some basics:

Click or tap "Answer:" to reveal the correct answer.

If any of these answers surprised you, then you would have been (with me) in the majority attending a lecture Monday evening at the Minnesota Zoo, from which this little quiz is adapted.

The subject was “Polar Bears: What We Know, What We Don’t Know, and How We Got Here,” and the questions were posed and answered by Seth Stapleton, a postdoctoral fellow in conservation biology at the University of Minnesota.

His key point: Much of what ordinary, concerned citizens think they understand about climate change’s present-day impact on polar bears is highly politicized, overly gloomy and just plain wrong.

Which is not to say that climate-driven changes in arctic sea ice aren’t a reality, already problematic for the bears in some areas and potentially a problem for others. But at the moment,  Stapleton said, only three of 19 subpopulations established for polar-bear study have been classed as clearly in decline by the international Polar Bear Specialist Group, which produced the map below.

One subpopulation is increasing, while six appear stable, and the other nine comprise a huge unknown: scientific data is insufficient, so far, to really know how they’re doing. Courtesy of the Norwegian Polar Institute
As of 2014, data suggested declines in three subpopulations of polar bears: Southern Beaufort Sea (SB), Kane Basin (KB) and Baffin Bay (BB), but Stapleton thinks new data may show improvement for the latter two. His own work centers on the Foxe Basin (FB) subpopulation, which is stable.

Responding to what he called “the preponderance of misinformation out there,” Stapleton offered these observations: 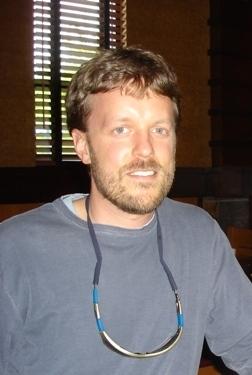 Stapleton describes the polar bear as an “iconic species to everybody, and now a poster species for climate change,” which you feel he considers an unfair demotion.

The bear has become his scientific passion after an earlier dalliance with the sea turtle in the West Indies – an endeavor, he joked, that took place in a tropical paradise but a tough political climate.

Now his work takes him to some of the most difficult terrain and weather on earth, and a political environment that sounds every bit as challenging. And it’s not just the sloganeering over climate change, which he acknowledged “makes it hard for a biologist like me to just do science.”

Some of the Arctic’s aboriginal peoples are affronted by outsiders coming with aircraft, tranquilizer darts, ear tags and GPS collars, handling bears in ways they consider disrespectful.

Some who hunt bears for meat are also concerned, he said, that the drugs make the meat unsafe for human consumption (it’s OK a couple of days after darting, he said).

Even where there’s agreement on certain observations – an increase in sightings of bears on land, near settlements – there’s dispute on how to interpret it: Stapleton and colleagues believe bears are spending more time on land as sea-ice conditions deteriorate; local knowledge holds that it just means the bear population is growing.

Perhaps this reaction shouldn’t be a surprise in cultures that revere the bear as a spiritual being, or teacher, or ancestor – or even, I remember reading once, as another tribe of humans who look pretty much like us indoors, and only resemble bears when they don fur to go outside.

However, Stapleton said, it has created strained and even “devolved” relationships between native groups and scientists from the outside, and that has put additional pressure on research that was difficult to begin with.

Consider: The Foxe Basin portion of Canada’s Nunavut territory, where Stapleton’s bear research is focused, covers as much area as Texas plus California, or five Minnesotas. Its polar bear population is about 2,600, give or take 500.

There’s no grid drawn on the ground in red, so making accurate surveys requires a complicated methodology in which a plane containing four observers flies a predetermined course, with each observer recording bear sightings and the team collating the results based on how many were seen by one, two, three or four observers, then making calculations to “estimate how many bears nobody saw.”

Some of the survey work has been shifted to satellite imaging, less offensive to native sensibilities and also less arduous in some ways than helicoptering around the Arctic, though more arduous in others.

To process the results, he said, at first “a colleague and I spent hours and hours watching a computer screen and looking for little white dots.”

Is that a bear or a rock?

Now they use programming that enables the computer to compare two sat photos of the same surface at different times, subtracting one image’s data from the other’s to distinguish white dots that moved (bears) from the ones that didn’t (rocks). 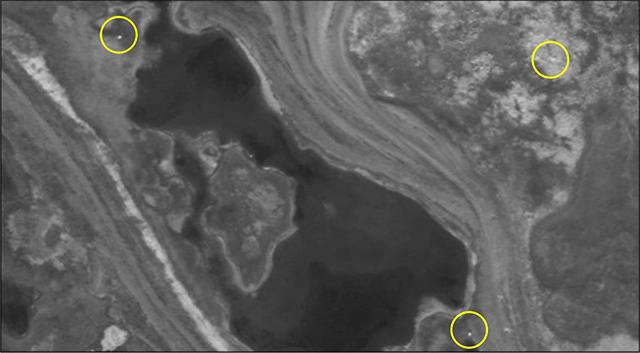 Imagery courtesy of Digital Globe, Inc. ©2012
Telling polar bears from large, pale rocks is a challenge to remote sensing by satellite. Comparing this image to a reference photo established that two of the white spots were mobile and therefore bears; the one at upper right stayed put and was counted as a rock.

With newer satellites delivering ever-increasing resolution, he said, the accuracy of this data keeps improving.

Body-heat-seeking infrared sensors have been tried but found, alas, to be of limited utility “because polar bears are so well insulated that all you can see are their eyeballs and their nose.”

However, the sensors can help locate active dens by the heat that mother and cubs send up through a vent in the snow.

Lately the venerable approach of darting and marking bears is giving way somewhat to “biopsy darting.” A device that looks sort of like a syringe without a needle is fired at a bear, extracts a small amount of tissue and falls to the ground, where its bright red coloration against the snow marks it for helicopter retrieval.

And of course drones are getting into the act; some, though not all, native communities consider these to be less objectionable than full-size aircraft.

After one “spectacular” experience a few years ago in which a handler flew the drone into the ground at 60 miles an hour, Stapleton said, researchers are building their skills with new models that are smaller, better suited to arctic wind and temperature conditions – and fitted with imaging capabilities that “show a dot you can actually tell is a bear!”

Monday’s talk was part of the World Speaker Series at the Minnesota Zoo, and a video of the presentation can be viewed here.

Climate’s impact on sea ice is clear, but consequences for polar bears are not