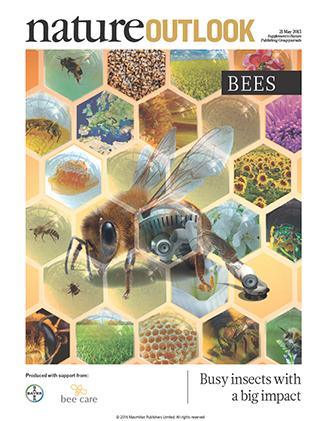 If you’ve been following at all the problems of U.S. honeybees, you know this species isn’t native to our continent.

But did you know that they arrived here nearly four centuries ago – in 1622, courtesy of English immigrants to the Virginia colonies who couldn’t see living in the New World without honey? Or that the modern-day Hazda people of Tanzania get about one-seventh of their daily calories from honey?

Did you know that beekeeping goes back probably 5,000 years? Or that the earliest human depiction of bees may be 3,000 years older still?  (It’s a comical image, showing an unlucky, honey-seeking cliff climber somewhere in Spain about to be punished by a swarm.)

We think of bees as socially sophisticated creatures that live and work in highly structured, resilient communities, foraging collectively for the best nectar and pollen, but did you know that most of the world’s bee species lead solitary lives in association with a single flowering plant? Or that the number of bee species runs to some 25,000, inhabiting every continent but Antarctica?

Though I have been writing about the problems of honeybee die-offs and American beekeepers’ colony losses for something like four years now, I knew none of these things.

I find the rich, deep back story of bees fascinating, and am always making margin notes on stuff to explore some later day, after the story of the moment is finished, but there’s just never enough time.

Over the weekend, however, I had some relaxed reading time and took up a treasure I am eager to share:

A special supplement to the UK’s world-class journal Nature, published last week and devoted entirely to bees of the world, its 10 top-notch articles and gorgeous illustrations made available at no charge to one and all.

Probably you’ve heard it said that modern science has proved beyond doubt that in fact a bee cannot fly.

Writing in the Nature supplement, Neil Savage traces that absurdity to its origins in 1934 and the work of two French scientists investigating the capability he describes in this way:

The flight of the bumblebee is a remarkable feat. These bees and related species can fly long distances to find flowers, then pause and hover in place, shrugging off powerful guests of wind. They can zip around while laden with more than half their weight in pollen or nectar. And altitude is no issue. …

Consider: Robert Dudley, an integrative biologist who heads the Animal Flight Laboratory at UC-Berkeley, once studied the flight capabilities of honeybees in the Himalayas, at altitudes of 3,250 meters (10,600 feet) and up.

He placed the bees in a portable pressure chamber and used an air pump to remove some of the air and simulate higher altitudes. The bees lengthened their wing strokes and all were able to hover at pressures equivalent to 7,400 meters above sea level. The champion bee reached 9,125 meters — well above the peak of Mount Everest, at 8,848 meters. …

He does not have a good explanation for this range of ability. “You just have to wonder, why would this come up in nature?”

There’s no good answer for that, but the source of the Frenchmen’s perplexity is simpler: They tried to understand bumblebee design in terms of a fixed-wing aircraft, with its well-known vulnerabilities to eddies and turbulence, which bees create in great quantity.

But bees are not fixed-wing things. They don’t have so much in common with birds, either.

Their wings beat at up to 240 strokes per second, the angles constantly adjusting to airflow over their surface; also, each wing stroke is followed by one in the reverse direction, so the vortex created by one stroke is neutralized by an opposite vortex from the next.

This knowledge is not without useful implications for aeronautical engineering. There is some possibility, Savage writes, that studying bees’ sensing mechanisms could lead to more turbulence-resistant airliners, or in the nearer future, improved design of drones.

How about this: Bee-sized robots that could be flown by remote control into collapsed buildings, following an earthquake, to gather information for rescuers? Or fitted out to serve as artificial pollinators for crops, should we need to replace the natural ones so under threat these days?

This is as good a time as any to point out that the Nature supplement is underwritten by Bayer CropScience, a major manufacturer of the neonic insecticides and, often, an accomplished challenger of scientific studies that attribute harm to its products.

“Beyond the choice to sponsor this topic,” Nature asserts, the company “has had no input into this Outlook.”

Well, they did get to contribute a two-page spread of sponsor content, too. But the supplement doesn’t shrink at all from discussing the current state of science about neonics and their impact on bee health.

I found the main treatment, “Seeking answers amid a toxic debate,” by Michael Eisenstein, entirely fair-minded in discussing the current state of the science and the central problem that confounds it: Laboratory demonstrations of neonic toxicity to bees are alarming, but it is difficult to extend those findings in ways that approximate the experience of bees in the complex natural world.

And there is plenty in Eisenstein’s discussion that can’t have gladdened hearts at Bayer, including quite recent field studies suggesting that neonics may pose more risk to bumblebees and other wild bee species than to commercially managed honeybees.

Seven scientists engaged in bee research gave Nature their views on the biggest challenges faced by bees and bee researchers, and the range of their opinions is quite wide.

With honeybees, the consensus seems to be that parasitic Varroa mites are the largest threat to address, with loss of healthy foraging habitat a close second, and pesticides a somewhat distant third. Readers who’ve been following the policy discussions on this will find new depth here.

Pat Willmer of the UK’s University of St. Andrews, thinks there are too many commercial hives being moved over distances that are too long, creating stresses on bees that can’t be eased without creating new problems:

Together, these issues lead to increased pest and pathogen problems; agrochemicals applied to attempt to control them can worsen matters in the longer term, because miticides and antibiotics (plus herbicides and insecticides that bees bring in from foraging) may affect bees’ gut microbiota, and reduce the insects’ ability to adapt to their pests. …

A reduction in the commercial honeybee population, whether deliberate or from colony collapse disorder, may not be a bad thing. We should use the opportunity presented by the fall in commercial beehives to support native wild bees and encourage natural honeybee-keeping, while providing enough floral diversity so that the bees we do have can collectively provide full and balanced pollination services.

Dave Goulson of the UK’s University of Sussex thinks the impaired bee health is but one more problem intricately enmeshed with modern, overly intensive agriculture, which falls short on even the most basic measures of sustainability:

For example, around the world about 100 billion tonnes of soil are either degraded or washed away each year, which is clearly not sustainable. Modern farming is highly dependent on artificial fertilizers, which contribute substantially to climate change.

Biodiversity is declining at an unprecedented rate. The loss of bees has attracted attention because our food supply directly depends on these insects, but the reduction in their population is symptomatic of a much broader problem. Most wildlife associated with farmland is also in decline, including birds, butterflies and beetles.

The majority of investment in agronomic research comes from industry, and tends to focus on increasing yields. Yet we already grow enough food to feed the projected global population of 9 billion in 2050 — we just waste an awful lot of it.

For now, you can still go for a walk in the woods, says Minnesota DNR