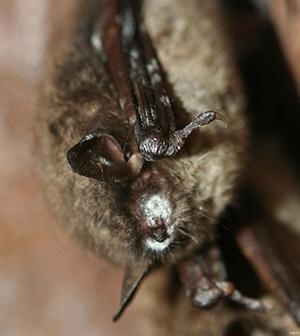 REUTERS
Two research teams have identified bacterial agents that may be able to keep bats from developing white-nose syndrome.

After nine years of deepening gloom, there’s some very good news for our endangered bats.

Two research teams, working independently, have identified bacterial agents that may be able to keep bats from developing white-nose syndrome.

In a field test reported a week ago, about 150 bats already under attack from the flesh-eating fungal infection were able to fight their way back to health with help from a soil bacterium.

And in laboratory tests reported a few weeks earlier, six strains of bacteria commonly found on bats were shown to be effective fungus-killers if their presence could be boosted a bit.

Because both approaches rely on essentially natural elements already present in the bats’ environment, these microbe vs. microbe strategies carry a smaller risk of unintended harm than, say, chemical fungicides.

Since its discovery in a cave in New York State in the winter of 2006-2007, the disease has spread south to Georgia and Alabama, north into Quebec and the Maritime Provinces, west to Wisconsin, Missouri and, as of this spring, Iowa.

In Minnesota and Mississippi, the white-nose fungus Pseudogymnoascus destructans (Pd for short) has been detected but no sick bats have been found – yet.  In all, 26 states and five Canadian provinces are on the white-nose list.

Across this region, Pd has proved to be a massively lethal attacker: An estimated 6 million bats have been killed in less than a decade. Seven hibernating species are afflicted, and in some caves or other hibernation sites the mortality rate has exceeded 90 percent.

But here and there the disease has taken fewer bats, for reasons that are unclear, even though its dynamics are fairly well understood:

Like a hibernating bat, the Pd fungus requires a cold, moist environment. Once the temperature drops to a certain point it begins to form a white coating on the bats’ muzzle, ear and wing tissues, eating away at the skin.

But well before these outward signs appear, the infection has already begun to stress animals that need all their energies to get through the winter. Skin lesions open the animals to dehydration, and as the bats rouse from their torpor, trying to raise body temperature beyond Pd’s tolerance, their fat reserves burn away.

Pd doesn’t seem to fade away on its own, so bats that survive infection one winter may fall the next. Speaking of the northern long-eared bat, Marm Kilpatrick at the University of California-Santa Cruz said recently that “everywhere the disease has been for a couple of years, this bat is gone. We don’t have any tools right now to protect this species.”

The northern long-eared bat is going onto the federal endangered species list, but in the absence of an effective response to the disease itself, the protection plans center on protecting the bats’ summertime breeding grounds with timber-cutting restrictions in Minnesota and other states.

But now a new approach seems possible, thanks to work done in Kilpatrick’s lab and by a team from Georgia State University.

At UC-Santa Cruz, a group of Kilpatrick’s graduate students led by Joseph Hoyt wondered if bacteria that bats already harbor could be raised to Pd-fighting levels.

So they isolated bacteria from the skin of northern long-eared bats and three other species especially hard-hit by white-nose syndrome and cultured them in the lab.

Six strains of bacteria, all from the Pseudomonas group, showed a significant capability to keep Pd from growing. Two of them seemed especially effective, suppressing the fungus for more than 35 days.

Theoretically, at last, this has the appearance of a potential silver bullet. Excerpts from the team’s paper published in the journal PLoS One:

Currently, there are few management options that can reduce [white-nose] mortality in affected regions. Preliminary investigations of treatments to reduce mortality using antifungal drugs caused higher mortality in the treated groups than control groups, possibly due to toxicity.

Other proposed chemical treatment options have avoided the toxic effects of the direct application of chemicals, but have yet to be validated in situ. Thus, treatment options are urgently needed, and a probiotic may be an effective way to reduce WNS impacts if it could at least partially inhibit P. destructans growth and delay mortality long enough for bats to survive hibernation.

Probiotics are regularly used in the biological control of disease in both aquaculture and agriculture, but have yet to be widely implemented in controlling wildlife disease, possibly because of perceived risks and lack of demonstrated success.

[But] risks associated with augmenting micro-organisms on a host … can be minimized by using bacteria that naturally occur in the hosts’ environment.

The Santa Cruz team plans to test its bacterial weapon in the field.

Meanwhile, the Georgia group has already done so.

Thinking along lines similar to Joseph Hoyt’s, Georgia State microbiologist Chris Cornelison wondered about the fungus-suppressing capabilities of the soil bacterium Rhodococcus rhodochrous, which has been studied for its ability to retard spoilage in fruits and vegetables.

“I thought if Rhodococcus can prevent molds from growing on bananas, it may be able to stop a mold growing on a bat,” he told National Geographic in a feature published Wednesday (with cool video, by the by).

After lab tests showed promise, Cornelison and colleagues partnered with researchers from the U.S. Forest Service to gather about 150 diseased bats early this past winter from caves in Missouri and Kentucky. Some were northern long-eareds and some were little brown bats; both species are important in Minnesota.

The bats were sedated, fitted with ID armbands and confined loosely in mesh containers, then placed in coolers where they could be exposed to the bacteria for just 48 hours. Afterward they were placed in caves of the Mark Twain complex in Hannibal for a long winter’s nap.

And on the evening of May 19, the cave was opened and the bats released in apparently perfect health, definitely free of any signs of white-nose syndrome.

In an exceptionally detailed report in the Bangor Daily News, Cornelison said:

In a lot of animal studies, you’re obligated to euthanize the animals after the research. It’s standard protocol. But in this case, both ourselves as researchers and state and federal conservationists recognized that the last thing we wanted to do was euthanize these animals at the end of the study when they’re doing so poorly on the natural landscape.

Being scientists, both teams are saying the usual cautionary things about the limits of these early experiments, and Cornelison noted that growing Rhodococcus in large quantities could be kind of expensive.

But there’s a huge economic value in preserving bats because of the insect control they provide, especially but not only to agriculture, where their contributions are valued at $23 billion per year.

And there’s no obvious reason why the simple approaches proved effective in these tests couldn’t be scaled up for far wider application.