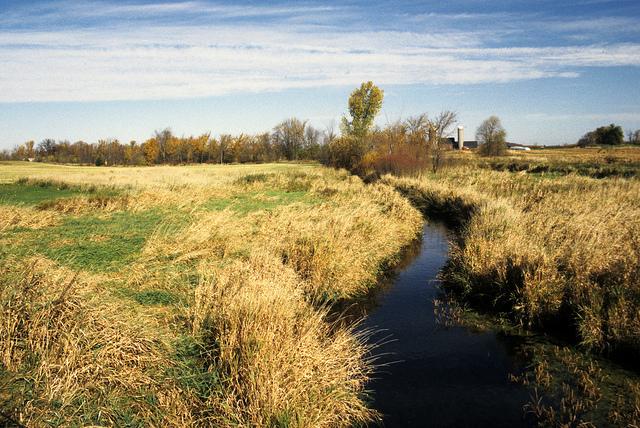 CC/Flickr/Wisconsin Department of Natural Resources
Minnesota’s adoption of a truly meaningful buffer program in place of ineffective rules, antique in origin and rarely enforced, will probably count among the most important environmental achievements of recent years.

A swarm of Minnesotans is to assemble at the governor’s residence this morning to insist he veto an omnibus budget bill which, in the guise of making funding allotments, is in fact aimed at undermining environmental protection in Minnesota.

Some of its provisions – like abolition of the Minnesota Pollution Control Agency’s  citizen board, which gives ultimate authority to people with maximum independence from outside pressure – would erase time-tested hallmarks of progressive stewardship.

Others, such as the cute rewriting of new pollinator protections to let insect-killing plants be sold as “pollinator friendly,” so long as the first contact with a systemic insecticide isn’t fatal, would undercut modest, sensible, important steps forward on a problem where action is long overdue.

Then there is the amazing categorical exemption of copper-nickel mining from state regulations on solid waste — a blank check for industrial pollution sources that don’t yet exist, for discharges that can’t yet be quantified, with impacts extending for centuries.

And in so many cases – like the three examples above – the basic badness is compounded by an added dimension of last-minute lawmaking in secret. Talk about your “garbage bills.”

Even if their anti-environment objectives weren’t so sufficiently objectionable, it’s indefensible for the proponents of these measures to cloak their initiatives from public view – and from reasonable review by legislative opponents – with the self-serving excuse of deadline pressure.

Let’s try this thought experiment: If the Legislature’s environmentally minded membership had managed to sneak into law, say, a mandate for a comprehensive review of all potential sulfide mining impacts in the north woods, without a committee hearing or a moment of floor debate, would that be considered fair play?

There are things that are really important, such as the buffer language, and there are things that I strongly disagree with, for example eliminating the Pollution Control Agency Citizens Board, which has been in existence for about 40 years through Republican and Democrat and Independent governors.

Given the split nature of governance, which the voters of Minnesota decided we should have, from their standpoint, and I’m sure from the other side’s standpoint as well, there are things in there that they really, really strongly dislike and want to change. …

[But] that’s something we’re going to have to live with for another year and a half and through another legislative session. People want divided government, this is one of the consequences of it.

But with all due respect, I have to ask: Wouldn’t this reasoning apply equally well to the education bill the governor has already vetoed?

We live in a time of such profound political gridlock in most areas of potential environmental progress that truly bold initiatives rarely gain much ground.

His personal and insistent leadership that Minnesota create meaningful natural barriers to agricultural runoff along the shorelines and stream banks of its public waters.

The Legislature hasn’t given him everything he wanted on buffers, and there’s an argument to be made that he should use his veto power to insist on fewer exceptions and a faster timetable.

Either way, Minnesota’s adoption of a truly meaningful  buffer program in place of ineffective rules, antique in origin and rarely enforced, will probably count among the most important environmental achievements of recent years.

Also, as a centerpiece of his legacy as governor, not least because he put the principle so plainly: Farmers may own the land, but the water belongs to the people.

An opposite sort of environmental legacy awaits the governor if he accepts, as the price of that progress, the stealth attacks in the agriculture/environment budget and other last-minute measures.

Other examples in addition to the howlers listed above:

I am not a full-time legislative correspondent, and I don’t claim to be expert on all of this legislation. I don’t even claim it’s a complete list of the sabotage; other troubling measures on renewable energy, for example, floated up in the session’s waning days.

But no special expertise is needed to appreciate the scope of these assaults on resources and stewardship programs which, poll after poll consistently shows, are valued highly not only by “environmentalists” but by most everyone.

And that, no doubt, explains why so much of this dirty business was done on the quiet. Look at all the heat Wisconsin’s governor, Scott Walker, has taken for his recent efforts to dismantle citizen boards and hobble regulators assigned to protect the people’s resources.

Mark Dayton can say it was Republican lawmakers and their northern DFL collaborators, not his office, who borrowed a page from Walker’s playbook to pound on the MPCA and shield sulfide mining.

But if he acquiesces to their “gamesmanship,” as Steve Morse of the Minnesota Environmental Partnership has so appropriately termed it, he will be equally and memorably culpable.

I suppose it’s possible, though not very likely, that if the governor were to cast a veto or two in the direction of all this environmental mischief, no better bill could emerge from the special session.

Even so, there would be progress of a kind in opening the mess to a full review in the sunshine.

So I hope that Mark Dayton, for his own sake and ours, listens hard to the crowd outside his house this morning and then asks himself:

Do I want to be remembered as the guy who