Because the subject was honeybees and their continuing die-offs, the annual survey of colony losses among U.S. beekeepers stirred a fair amount of coverage when it came out last week – some of it bringing more heat than light to the issues.

Under the headline “Honeybees Are Screwed: Let’s see us engineer our way out of this one,” J. Wesley Judd reminded readers of the Pacific Standard that “bees are arguably the most important insect to humans” – pollinating crops in the fashion of “flying penises” – and delivered this grim summary:

The total annual loss … rose from 34.2 percent in 2013-14 to 42.1 percent this year. This means that a disproportionate number of honeybees died during the summer — which is significant, to say the least.

Twenty-seven-point-four percent of all managed honey bee colonies disappeared last summer, compared to 19.8 in 2013, making this past summer the first in history where the percentage of bees lost was bigger than the subsequent winter.

It’d be like seeing more humans die as a result of the flu in July than January, Dennis vanEngelsdorp, the study’s co-author and professor at the University of Maryland, told CBC News.

By contrast, over at Forbes Magazine, the economic forecaster and longtime beekeeper Gary Shilling devoted his Intelligent Investing column to a call for calm under the headline, “The Plight of the Honey Bee: Fact and Fiction”:

There’s no question that beekeeping has become more challenging. Queens used to live and lay eggs vigorously for two or three years. Now, you’re lucky to get one season before Her Majesty dies or needs to be replaced.

Last winter, 20% of American bee colonies died and that followed an unheard of 43% loss last summer.

Contrary to the fears of alarmists, however, honey bees aren’t going to disappear from the face of the earth. It’s just getting more expensive and time-consuming to keep them flourishing and producing honey and pollinating crops. 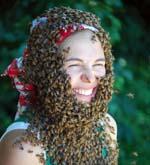 Quite a wide gulf there and, even in the more neutral coverage, not a lot of depth. So in search of perspective is I turned to the University of Minnesota’s famed Bee Lab and specifically to Katie Lee.

Lee is a Ph.D. candidate in entomology at the U, where the Bee Lab’s renowned director, Marla Spivak, is her mentor. And she helped gather Minnesota data for this year’s survey, as she has in the past, but that may be among the least of her credentials on this subject.

Writing the book on bees

In addition to 10 years’ work on bee health, with a special focus on parasitic Varroa mites, Lee has been traveling to California for the last five to extend the application of Bee Lab research to commercial beekeepers there. This “technology transfer” will be the subject of her dissertation.

Oh – and she wrote the book, so to speak, on last year’s survey: Each year the preliminary results come out in the spring, followed some months later by a research paper that refines and analyzes them in greater depth. Lee did last year’s (and may be roped into doing this year’s, too, though she’d rather devote the time to her own research).

So her views on the new stats merit attention.

She was “startled,” she said, by the summer-losses figure of 27.4 percent that has been getting so much attention, and considers it a “big deal, fairly unusual” for summer’s rates to be higher than winter’s.

On the other hand, summer losses are not so much new as newly quantified: The survey didn’t ask beekeepers to report on summer losses until the 2010/2011 edition, according to the Bee Informed Partnership, which conducts the survey with support from the U.S. Department of Agriculture and other federal agencies.

To be sure, 27.4 is a bigger number than, say, the 19.8 percent reported last year, or the 18.3 percent for 2010, but significant ups and downs have been typical in colony-loss tracking.

I think everybody understands by now that significant die-offs have long been a recurring risk of beekeeping; what’s different now is a pattern of rates that are unusually high, widespread and prolonged.

There is wide agreement that this pattern is driven by the interrelated factors of Varroa mites, exposure to neonicotinoids and other insecticides, and loss of foraging habitat.

beeinformed.org
Significant die-offs have long been a recurring risk of beekeeping; what’s different now is a pattern of rates that are unusually high, widespread and prolonged.

But none of those factors can be studied in isolation in the field, and because managed honeybees are more like livestock than wildlife, what’s being measured in the annual survey is their response to both environmental stresses and beekeeping practices.

Participation in the survey is both voluntary and self-selected, with some turnover from year to year (especially among the noncommercial operators); this time, they accounted for about 15 percent of the nation’s managed honeybee colonies.

More than 6,000 backyard keepers and only 112 commercial operators were in this year’s survey, and the summary figures released last week pool their losses even though the two groups differ markedly in their approaches to bee health and loss prevention. (The sideliners tend not to get much attention from bee researchers; they’re dwarfed in numbers by the backyarders and in colony count by the commercial operators.)

“Even when they do everything right,” Lee said, “beekeepers can still lose colonies. But in general the commercial beekeepers manage more rigorously, more intensively. A lot of backyard beekeepers don’t even treat their colonies for mites.”

Huge volumes of data are gathered in the survey: Participating beekeepers complete an eight-page form (you can see it here [PDF]) on matters ranging from why they started keeping bees, to what mite-control strategies they use, to how often they split colonies to grow their operations.

That latter factor is another important aspect often overlooked in press accounts. It explains why, despite high losses, the estimated total of honeybee colonies keeps going up, not down. This year the estimate stands at 2.74 million, Lee said, up about 100,000 from last year, although she thinks there’s always been some double-counting of colonies that commercial beekeepers move from state to state.

But as with summer losses, much of the data on management practices has only been collected since 2010/2011, so a full-scale analysis of those trends won’t be done for another year or so.

Lee is hopeful that the results can lead to reduced colony losses through better beekeeping.

“There’s an old joke that if you ask 10 beekeepers a question about the best way to do something, you’ll get 11 answers,” she said.

We do have things to learn about managing to reduce losses, but I don’t think there’s any chance that honeybees are going to be wiped out. Actually, a lot of wild bee species are actually in more danger right now.

Our bigger risk is losing more and more beekeepers, as it just keeps getting more expensive. It’s a fairly small number of people in the field now, and it’s an aging population, and not a lot of people are wanting to get it into anymore.