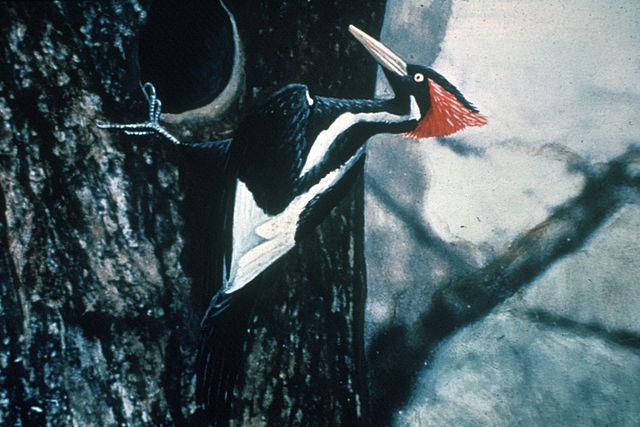 CC/Wikimedia Commons
Extinction is actually quite difficult to prove; for each species we can agree about, like the passenger pigeon, there are several, like the ivory-billed woodpecker, that carry lingering doubt.

A fresh analysis of vanishing species over the last century or so concludes that our planet is without doubt entering a period that will count as its sixth great extinction, with losses of biodiversity “unprecedented in human history and highly unusual in Earth’s history.”

Because the study combines a newer, and higher, estimate of “normal” extinction patterns with perhaps the most cautious accounting available on present-day rates of loss, its authors can lay credible claim to departing from past forecasts in a conservative direction.

Still, their work concludes that vertebrate species – selected as the focus for this analysis because the data are better here than for other branches on the tree of life – have been disappearing since 1900 at an average pace more than 100 times faster than the normal or “background” rates of Earth’s history.

Put another way, species losses among different groups of vertebrates over the last 114 years might have taken between 800 and 1,000 years at the background extinction rate.

Their conclusions about the consequences of these losses, attributed almost entirely to human overconsumption of planetary resources, are anything but reassuring:

If the currently elevated extinction pace is allowed to continue, humans will soon (in as little as three human lifetimes) be deprived of many biodiversity benefits.

On human time scales, this loss would be effectively permanent because in the aftermath of past mass extinctions, the living world took hundreds of thousands to millions of years to rediversify.

Avoiding a true sixth mass extinction will require rapid, greatly intensified efforts to conserve already threatened species and to alleviate pressures on their populations — notably habitat loss, overexploitation for economic gain, and climate change. All of these are related to human population size and growth, which increases consumption (especially among the rich), and economic inequity.

However, the window of opportunity is rapidly closing.

The chief author of the paper, published Friday under open-access rules by the American Association for the Advancement of Sciences in its journal Science Advances, is the ecologist Gerardo Ceballos of Mexico’s National Autonomous University.

Erlich among the authors

He was joined by scientists from Princeton, Berkeley and Stanford, including the latter’s legendary Paul Ehrlich, who gives a summary of the findings and implications in a school-produced video here.

The notion of another mass extinction being under way is hardly a new notion, but there has been sharp disagreement about how best to quantify and compare the rates at which plants and animals are “blinking out” under human-caused pressures. In the end, the calculations rest upon two key numbers.

One is the “background rate” of extinctions throughout the earth’s history, which has typically been put at 1 E/MSY – a metric meaning that in every century, the rate of loss is between 1 in 10,000 species at the high end, and one-tenth that rate at the low end.

The other is the current rate of loss, a ratio between two numbers that themselves are difficult to state with certainty:

Given these difficulties, we surely should prefer that scientists bring a conservative approach to their computations of extinction loss, and that is precisely what the Ceballos team has done.

Since the 1990s, when analysis of the fossil record yielded 1 E/MSY as a generally accepted background rate, some closer analysis of mammal species has led to an upward revision and the setting of 1.8 E/MSY as a better estimate. Notice that raising the background rate automatically makes the contemporary pace of extinction look slower by comparison.

To be even more conservative, the team rounded it upward to 2 E/MSY, or exactly double the previously standard assumption.

Next, the team confined its inquiry to vertebrates – for which the available data are most complete – and relied upon the extinction tallies assembled by the respected International Union of Conservation of Nature.

Using the newly doubled background rate of  2 E/MSY, the team calculated that only 9 vertebrate species would have vanished since 1900 if extinctions were proceeding at the historic pace. Instead, the losses have been 198 by the most conservative measure, 477 by the  less stringent count.

In one sense, the Ceballos team takes a very different approach from IUCN’s report last December that stressed how much remains to be discovered about species diversity on earth, even as it continues a sharp decline.

But its combination of conservative method and dire conclusions is getting a lot of attention in the mainstream press, and generally positive appraisals among scientists who know something about the subject.

Worse is yet to come

Writing in the UK Guardian, the paleogiologist Jan Zalasiewizc of Leicester University said the paper yields “probably the most robust estimate yet of how severe the modern crisis is” while underlining its essential cautiousness, especially in regard to overarching global phenomena that are just getting started:

Once more, this is a conservative estimate. It simply considers the kill mechanisms operating today, of habitat loss, predation, pollution and so on.

The Caballos projection does not try to factor in, for instance, the effects of global warming, or of ocean acidification. Once these kick in in earnest, they will sweep many species out of their habitability zones, and ratchet up the extinction rate still further.

Zalasiewizc acknowledged that the current extinction pattern “might be viewed as just one more episode of biological destruction in our planet’s history. The Earth has been here before – and will be here again, before its life is completely extinguished a billion or so years into the future.”

But that doesn’t make contemporary trends any less significant:

In terms of scale, we are now living through one of those brief, rare episodes in Earth history when the biological framework of life is dismantled. … This particular perturbation to the biosphere, though, has some very special features. Indeed, there has been nothing remotely like it in our planet’s history.

… [P]ast extinctions have been driven by what are now becoming very familiar horsemen of a planetary apocalypse: massive volcanic outbursts to choke the atmosphere and poison the seas; the mayhem caused by major asteroid impact; and the wrenching effects of rapid climate change. None of these has really figured in the current biological crisis – not even climate change, which is still only in its early stages.

Instead, the extinctions are being driven by the effects of just one single species, Homo sapiens. Such a mass extinction has not occurred before (with the possible exception, 2.5 billion years ago, when a type of microbe evolved photosynthesis to spew out oxygen, a gas that would have been highly toxic to the other microbes living then, and these would have been pushed to the fringes of life on Earth – where they still remain).

Even more extraordinarily, this single species is land-living, but has managed to become the top predator in the oceans too, causing populations of whales and fish to collapse.