As I walked out of the garage yesterday morning, bent on sailboat repair, the phoebe launched itself past my ear with a buzzing wingbeat that made me drop my armload of wrenches and rope.

Despite four years of precisely this experience, repeated several times daily through the warm months, I have not tamed the startle reflex, nor lost my amusement over it.

And therein lies a mystery, I guess, about the charm of cohabitating with birds that have become long-term tenants under our eaves, expanding their nest and their numbers summer after summer, in the tightest proximity to people, cars and cats.

As I picked up my tools the fleeing phoebe circled back to perch where she usually does, on a lower branch of the tree closest to the house, flicking her tail as I passed by.

No other bird around here will tolerate such a close approach. But she – or as easily he, since both sexes share the phoebes’ domestic labor – is of a species we call sociable, and often seems as curious about what I’m up to as I am about her (or him, or them).

I laid the tools out on the boat trailer’s tongue and cut away the old winch line for replacement, then threaded the new line, tied my knots and began to crank the handle.

A tree frog emerged from the winch, blinking, and rested with his head and shoulders in the open, digits splayed across the iron.

He (or she) was similarly untroubled by the human whose big, busy body was but inches away, or by the vocalizations that ensued when the line proved to be winding poorly and job needed to be redone.

No possum-playing here: The frog stayed put while I went into the house for a camera and made his portrait from a few different angles over a period of several minutes, long enough to see him adjust his chameleon-like coloration from gray to the reddish-brown of the winch’s iron.

Then curiosity got the better of me.

Slowly I extended a pinky and moved it toward him, in his plain view but causing no reaction until at last I touched fingertips with him – at which point he withdrew his limb just enough to break contact.

I went back to work imagining that he, too, was as curious about my doings as I was about his. A silly notion, I well know, but that doesn’t make it any simpler to shake off.

Proximity to wild creatures was a prime prospect, and has proved an endless pleasure, of living in Skunk Hollow, but the nature of this joy is hard to describe with precision.

Some of it is mere appreciation of natural beauty: the luminous scarlet of a tanager or indigo of a bunting at the feeders, the majesty of a broad-winged hawk or barred owl alighting on a limb overhead, the calls of songbirds and peepers filling the springtime woods with music at twilight.

Some of it is the thrill of encountering animals typically associated with a more remote countryside – bears, fishers, coyotes and, about a month ago, an otter.

Some of it is educational. We are a list-making species, obsessed with naming things, and I feel lucky for the firsthand encounters that prod me to expand my own familiarity. But I must admit that I’m not (yet) the dedicated amateur naturalist I rather expected to become when we first settled out here.

Sometimes, it seems, just seeing and being close is enough.

Of animals and empathy

Last week,  on a whim, I dropped “Blade Runner” into the DVD player to kill a half-hour or so before the 10 p.m. news.

I have a perhaps unreasonable admiration for this film, large portions of which I seem to have memorized, but what struck me afresh on this viewing was its portrayal of animals in a post-apocalyptic future:

The artificial owl in the headquarters of the android manufacturer. The artificial snake in the strip show. The suffering tortoise and captured butterflies described but not shown in the scripted police interrogations. And of course the climactic dove, whose further description would require a spoiler.

A central notion of this movie is that memory, with its emotional encoding, is all that separates human beings from “replicants” – android slaves so technically advanced that their artificiality can be detected only through advanced psychological examination (or, of course, by shooting them to pieces when they rebel against their masters with murderous rage).

But this is a major, and interesting, thematic departure from Philip K. Dick’s “Do Androids Dream of Electric Sheep?” on which the movie is otherwise quite closely based.

In Dick’s vision, it’s empathy that separates humans from androids – a quality that has become difficult to sustain interpersonally in the wake of World War Terminus.

One popular way to stay human in this world is through treatment with an electrical device called an Empathy Box. But the preferable alternative, if you can afford it, is to have a live animal in your home – a horse, a chicken, a raccoon, a mouse, an ostrich, a sheep.

Animals are triggers for our latent empathetic responses, Dick felt, and also direct sources of the vibe itself. Unfortunately, securing their company is a difficult and wildly expensive proposition on a planet where most animal life has been destroyed and the environment remains toxic.

In this world, a wealthy industrialist might own five animals, including “the heaviest, largest Muscovy [duck] on the West Coast.” Working stiffs like the protagonist Deckard, who makes an adequate living executing rebellious replicants, have to make do with an ersatz animals — in his case a battery-powered sheep — and the shame that ensues.

Empathy for the monstrous

An empathy test confronted Sallie and me a few weeks ago when we saw a large snapping turtle attempting to cross a road near our home, having left a farm pond for a wooded wetland on the other side.

Because we’ve known people to go out of their way to run over snappers, we stopped the car and then waved oncoming traffic away while I tried to encourage this big, ugly monster to pick up the pace.

The turtle’s response to my approach was to turn toward me, hissing, and then to charge with what little speed he could manage. When he got with a couple of feet of my feet, I stepped back and he turned away, back toward the pond, and eventually hurled himself down into the reeds. 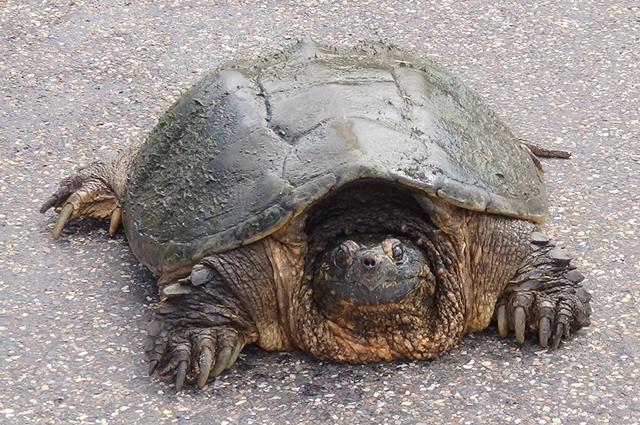 MinnPost photo by Ron Meador
The turtle’s response to my approach was to turn toward me, hissing, and then to charge with what little speed he could manage.

So in the end I may have been more hindrance than help to him. (Or her.) On the other hand, I’ve been keeping an eye out for flattened turtles at this fairly busy crossing and have seen none.

Good news from the nest

As for our nesting phoebes, I was relieved over the weekend to find the season’s second clutch of eggs in the nest.

The first clutch came very early this year. It was sometime in mid-May when I walked past, whistling, and saw four fluffy heads pop up above the nest rim in response, mouths open and cheeping for food.

That would be about a month ahead of a brood I wrote about, I see, exactly two years ago today.

This year, as always, we enjoyed watching the family from a respectful distance as the nestlings grew larger, and quieter, and the parents grew bolder around us, ferrying food back and forth to the young as we worked on the boat and the gardens and the garage.

And then one day all of the young were gone, the parents were nowhere in sight … and a single pearl-pink egg remained in the nest. I didn’t know what this meant, but it was hard to see how it couldn’t be bad news:

An egg that never hatched? A new clutch interrupted? Predation by some other bird? Nest abandoned at midyear? 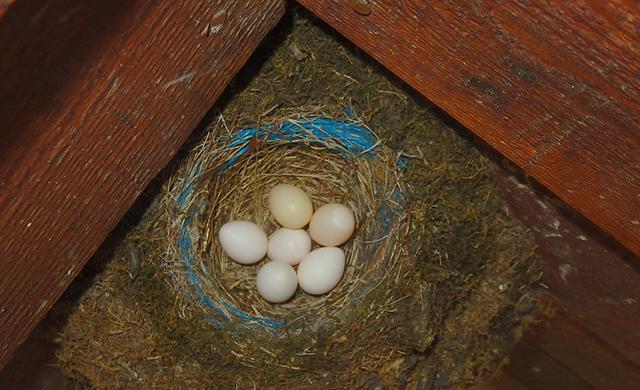 MinnPost photo by Ron Meador
I was relieved over the weekend to find the season’s second clutch of eggs in the nest.

So yesterday, after finishing my boatyard chores, I waited till the phoebes were away from the nest and looked inside with a hand mirror and apprehension.

Turns out all my sorrowful empathy was misplaced:

I had pitchforked the spent bales into the woods, whence the phoebes retrieved an excellent, high-tech building material – in pieces I recall as being 2 to 4 feet long– which they brought to the nest and worked it into walls that now seem exceptionally sturdy.

A whole wave of empathetic feelings followed this discovery, with something like pride in the lead.

Letter From Skunk Hollow: On empathy with birds, tree frogs, even a snapper